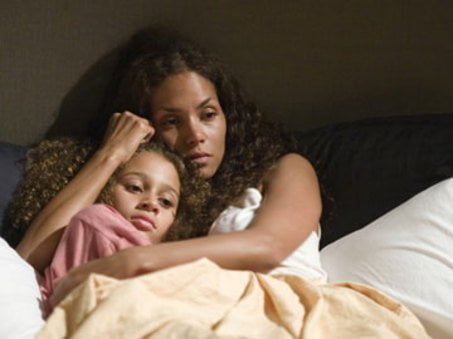 Halle Berry may be playing an angry and at times pretty mean widow in Susanne Bier’s Things We Lost In The Fire, but in a face-to-face conversation, she’s just a beaming first time expectant mother obsessed with lots of spicy and sweet on her plate right now. And it could be that her current loyalty to the baby’s daddy, much younger French Canadian male supermodel Gabriel Aubry, led her to play really hard to get with a romantically persistent Benicio Del Toro in the movie. Halle opened up about these matters and more to the Long Island Press, including squeemishness regarding any tell-alls about her personal life on Oprah and elsewhere, and how having kids is not going to cramp her style in the least when it comes to sex and baring it all on the big screen.

You look terrific, being pregnant doesn’t seem be getting you down. So are you having any strange, new cravings ?

So are you having any fun yet doing this pregnancy thing?

HB: There’s no bad! Nope, there’s nothing bad about it. Even the morning sickness, and the vomiting and hot sweats. Nothing’s been bad about it. I’ve loved every second.

Do you think your life is going to be different when you become a mom?

HB: I know that whenever I have this baby, my life is gonna change. My life’s already changed. I know that my work will change. And I know the roles I choose will change. Because I’m somebody who chooses roles based on what I’m most needing, and wanting to express in my real life.

I don’t purposely do that. But halfway through a movie I go, oh, I know why I’m doing this. I get it now! So I know my choices will change. And I think they will hopefully make me better. I’ll be more grounded. I’ll have more life to draw from.

Do you think being a mom will mean playing mother roles with more passion?

HB: Well I don’t think I’m just going to be playing mothers. I hope not! But I think being a mother will inform my life. It will make me a richer, deeper human being. So I think that will show up in my work.

What made you jump into this Things That Got Lost In The Fire?

HB: I got hold of the script and I thought wow, I’ve got to play this part. And I don’t care who else is in it, I’ve gotta do this. My agent put in the calls and they said, well we don’t know. Not her! So I got together with the director, and we sat down for coffee.

And my first question to her was, do you mind that I’m black. Because I think that might be my problem here. And she said, to hell with what color you are. I don’t care what color you are. it doesn’t mean a thing. And to her, in her Danish mind and world, it didn’t.

So that was a really good connection we had and…I got the part! But for me, there was something that touched me about this character, her pain as a widow. I haven’t lived her story in any way, shape or form, but we’ve all had to go what she’s been through, in some way.

And what’s that for you, because you’ve had some painful stuff in your own life?

HB: Just having to go through the valleys of life, and coming through on the other side. And realizing that you’re indelibly better for it. Life is different, sure, having had that painful experience. But life can then still often be better, having had that experience. And you think of your life differently.

And it’s a fight not to completely fall apart. Because if you do, your whole world falls apart. You can’t sugar coat the harshness of what you’re dealing with. When you’re trying to come to terms with the loss of a love in your life, it’s really, really difficult to navigate one’s way through, that’s what I discovered.

But I’m lucky. I realized that I’ve never lost anyone really, really close to me. Ever.

Why do you want to be a mom?

HB: The beauty of children is that they’re so honest, and they’re so organic. And genuine. They just embrace situations, and they have such vivid imaginations.

This is a really emotionally grueling role for you. Do you try not to take that home with you?

HB: Yeah, I’ve found a way to do that. It wasn’t always the case! But I have learned a way to leave work at work. And it’s not really healthy for your real life, to bring that stuff home.

So what’s your secret on how to do that?

HB: Well…I’d have to kill you! You know, to tell you my secrets. But there is a way to wind down, and just leave it there. You learn how to do that. And that you don’t have to live it, to be it. And I think I’ve learned how to do that, after all these years.

How did you like having Benicio for your sexy leading man?

HB: He has a wonderful way of finding the funny in every situation. Now I may be imagining this, but in every scene, he found a way to make one take just funny. So it was just fun to sit back and watch him. Because I knew it would be coming. Eventually! You know, his funny take.

And that added for me, a lot of lightness throughout the day. Because when you do deal with heavy things that you don’t want to think about, he was good that way. And like sometimes he’d go, I don’t want to say that line. And we’d tell him to because, that’s a woman thing! Hey, for years I’ve had to hear that I had to say something because, it’s a man thing! And you know nothing about that, sweetheart. And I’d be like oh, okay…

You and Benicio have that really hot, steamy scene together, but in the end it never comes to pass. How did you feel about that?

HB: Well it could have happened. I guess! But you know, it would be wrong, and I think that stopped it. But I think it was right to have an attempt at it!

Like when I came in the room and I saw him in the shower, I was like whooo!…You know, it took my breath away. And he had a moment where he got his breath taken away. But that was because somehow we got lost in the rapture. But sure, there was that sexual tension.

Would you saw you’re a complicated person?

How was it doing the Oprah show, was it freeing for you?

HB: Freeing? No! But you know when you on there, you’re gonna have to answer some stuff that maybe you don’t really want to talk about. But with the timing of my pregnancy, you know, that always happens. My personal life always eclipses my career. And I hate that it happens to me. But that seems to be my lot.

And so I knew that would happen. And it’s scary. Because I’m not someone who really wants to talk about personal stuff. But I knew that I would have to, and that I’d have to answer certain questions that I tried to navigate my way through.

And Oprah was really great. She didn’t…push too hard! Which was a relief.

Do you think being a mother will affect the type of roles you take?

HB: I don’t know yet. I will find out…But I know that I will personally not feel like god, I wish I never did Monster’s Ball because I now have children….You know, with all of the nudity and sex in the movie. Or Swordfish, with all the – gratuitous nudity! So no, I wouldn’t feel that way.

Are you ready for Oscar buzz about your work in this movie?

HB: I don’t know. You never think about it, you know? Honestly, I would drive myself nuts trying to think about it. I’m just thinking now about having a baby! And thinking about what will happen after that happens.

But I did learn that it was the most wonderful, glorious important night of my professional career, when I won. Hands down. And nothing will ever compare to the glory – and the shock – of that moment for me, personally. And the fact that it’s part of history now, my legacy, that my great grandchildren will be able to say hey, my great grandmother won an Oscar back in, you know…And that feels good.

But life quickly went back to normal. And that’s what I discovered about awards. They’re great for that night, great job, you get a pat on the back. But then you go back to be an actor, trying to make a living. And you just try to go search out good roles. And roles that are fun, and that give you a chance to grow. And do something different, and challenge yourself. And entertain your very own self , as you’re trying to entertain others.

Any more roles for you before motherhood?