Katt Williams may be cooling it now with his new movie, First Sunday, after the hot controversy he stirred up donning that noose for the BET Hip Hop Awards last year. Williams tones down his act as an eccentric choir director in First Sunday, confronting two suspicious visitors to the church played by Ice Cube and Tracy Morgan, who may have a lot more than spiritual matters on their minds. The diminuitive funny guy with a gigantic comedic personality gave hints of his more serious side during this interview, as he talked about getting into a different kind of fashion sense, not getting into the leading man thing, being a father first and how it’s changed his life, and future stuff going on with Eddie Murphy. 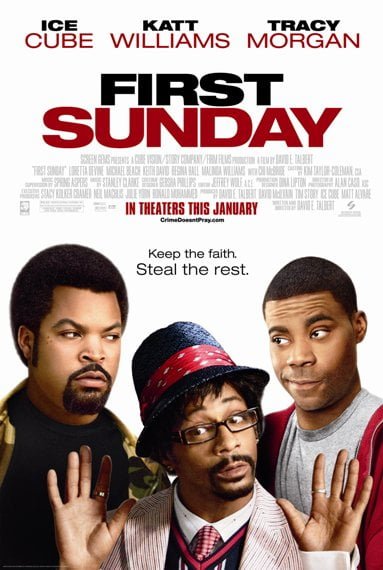 So what is your character Rickey up to in First Sunday?

KATT WILLIAMS: He’s a choir director. And a choir director in African American churches, is an important and a thankless occupation. But they’re some of the most colorful characters in church.

And I tried to do just as much as I could do comically with him, and yet not make it as stereotypical as it could have been. I needed to understand the guy, and have him be a real guy to me in my head.

What made you go for First Sunday?

KW: Well, I’m a father first. And I was attracted to the fact that they were allowing me to do something as close to good wholesome fare that I was apt to do for a while! And the check made it possible to do some other things. So I felt good. And the kids were happy. And the check was nice!

Were you the one who picked out those clothes of yours for the movie?

KW: Well, however many fans I have – and I thank all thirty-six of them! – they’re fans of certain things about me. And one of those things is a dress marriage. So my dress has to match whatever I’m doing.

So I did make sure that I was comfortable with what he had on. You know, you don’t usurp wardrobe’s job, but you want to make it where you buy the character first. Because that’s the first part of elementary acting. Which is where I’m at.

Did it feel weird to shoot in a church?

KW: Well, at first it was a little difficult. But not as much as it could be. Because lots of movies have been shot in churches, and done far worse! Like being killed in churches.

KW: It’s an atmosphere of fear! For me, that’s what it is. I can hear him calling me right now! No, Cube is probably one of the most professional people I’ve ever met. And he runs a tight, yet not constricting set. It’s organized and it’s by the books, as far as being fundamentally sound.

You know, there’s no extra BS. It’s about good attitude and work. So I’ve been blessed. This is my second time working with Cube, and he’s been very consistent. So it was a good situation.

How different was it doing First Sunday with Cube, from your last movie with him as Money Mike in Friday After Next?

KW: Money Mike was a pimp. Being a pimp and a choir director, there’s a little bit of range between those two worlds. You would hope! Otherwise I’ve just murdered the entire film. That’s the beauty of being a comic. There’s not a lot of brain surgery to be done.

You know, it’s just important that I make sure whatever character I’m doing is funny, and appropriate for that character. And there were a lot of decisions for me, as far as what the character was going to look like, and sound like. And his mannerisms are just as detailed, if not more so, than the Monkey Mike character.

Is it tough going from standup to the big screen?

KW: No. Vulgar things pop into my head, because that’s the form for that! Things go based upon your category, so that’s standup. And the reason it’s important that I have some sort of an acting career, is so I can do other things. Otherwise I would only be duplicating what I do in standup.

But the same pacing has to exist. It’s just that in standup, it’s all about the flow and the ebb of where you’re going and whether you sustain that, or break it down. And with acting, it’s the same thing for me.

But it’s very difficut where your character is crying, and then they go cut and you go off Saturday and Sunday to DC and Chicago and fly back, and okay, I’m crying again. But I guess that’s why they pay you as well as they do! So I am rapidly getting into mine.

But yeah, this is currently a departure. And you know, my kids are from eighteen months months to eleven years old, so it’s important to do some piece of a body of work that they could actually…go to the red carpet for!

Anything exciting coming up in the future?

KW: Yeah, Eddie Murphy and I are writing our next two projects. We’ve been hard at work at that for DreamWorks. And Pimp Chronicles 2, that’s going theatrical. So there’s enough stuff going around to keep me busy.

But having kids has taught me not to be desperate. I don’t even want a part that I don’t get. Because it must be some other guy’s part. How stupid am I gonna feel, if I get this guy’s part and he was supposed to get it, and I’m a loser in the end anyway.

Any thoughts about doing a leading man?