Petite and perky Aussie starlet Isla Fisher was glowing and chatty when she stopped by for this conversation at the Regency Hotel in NYC, about her new Adam Brooks romantic comedy, Definitely, Maybe. But the first time mom clammed up when questioned about brand new motherhood with the birth of Olive, and engagement to babydaddy boyfriend Sacha Baron Cohen, famously known as that on-screen mischief maker Borat. Isla did conversely open up and come clean with far too much information, about all that dirty work connected to her first gig ever, and it has something to do with collecting horse poop, don’t ask. She also touched on some touchy subjects like swag, boobs and naughty Bill Clinton.

Wow, you just had the baby, and you’re so thin already. What’s your secret? 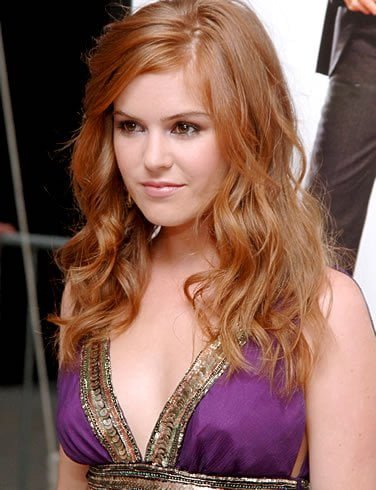 ISLA FISHER: Nah, I don’t want to talk about it.

IF: No, honestly. Motherhood is my favorite topic. In private! But publicly, I don’t want to talk about it.

IF: Because I don’t want to draw any extra attention to her. She didn’t choose to be born into…you know. She deserves her anonymity!

Okay, you won’t talk about your kid. So how about Sacha?

But it relates so much to this romantic comedy.

IF: Oh, right. Try it. But I probably won’t answer!

Well, ‘Definitely, Maybe’ is all about marriage proposals. Do you remember your proposal?

IF: Do I remember! Oh my gosh, I would never talk about that.

So how about making out with Ryan Reynolds in this movie. Can you talk about that?

IF: Ryan is somebody very easy to have that chemistry with, who smolders in the way he does! So we let it just…race off the page!

In what ways did you relate to your character April?

IF: She’s great, she says what she thinks. I always seem to play these characters who have…less social etiquette than others! You know, than regular people. Or at least, I get to be very naughty. But April was a part that really terrified me.

IF: Because of the emotional element. But it was that fear that inspired me to take that role. So it wasn’t my first idea to take it. It was more to challenge myself. But I love great, flawed people, that you can really inhabit the emotional landscape of.

She starts out as just a copy clerk, then goes on to bigger and better things. What was your first job like?

IF: My first job was collecting horse poop, and putting it in sacks. And selling it on the other side of the road. For a dollar! And it’s quite a lot of work. I would say that seventy poops go into one of those big sacks.

And let me tell you, you have the gloves on at the beginning. And then you think, this is taking too long. And before you know it, there are no gloves! And you’re just picking up the poop. But it’s dried poop, rest assured. I’m going to regret saying that! Too late!

Well, I learned something new today. How about working with this director?

IF: He was great. I remember when I said ‘bare ass and sandpaper’ in his face. And I think he thought, ‘I don’t want April to say that!’ But then it ended up in the movie.

Do you think love has to come at the right time in your life, or it won’t work?

IF: I don’t know if I’ve lived long enough to know that, I don’t know. I think you can find love and the person you’re suppose to be with, under really inconvenient circumstances. And still pursue it. So…there’s no hard and fast rules.

What kind of scripts are you getting these days?

IF: Um…I’m just trying to think. When did I read a script last! I can’t remember! But I don’t have a strategy. I’m more just enjoying the opportunity to work. As we all know in our business, it’s a long haul to get to where you want to get to. And to even be sent a script, it seems like a luxury.

They weren’t banging down your door, not even after Wedding Crashers?

IF: I just got more of like, the girlfirend role, of the male comedian.

Well you seem to have taken that one on in real life! Is your name popular in Australia? It’s so unique here.

IF: You know, my name is actually quite a popular name in Scotland. People elsewhere always think it’s far more exotic than it is. In Scotland, it’s a common name.

Your character is a Nirvana fan, are you?

What other music are you listening to now?

If: Hmm..Right now, Beatles music for babies! Which is just this terrible synthesizer. You know, bing, bong, bing. Yes, and world music.

Do you think you’ve finally got the American accent down?

IF: I don’t think you ever get it ‘down’ down. Because when you get emotional, or cry or get angry, you tend to slip back into your own dialect. Because your mouth is a muscle, and it forgets.

This movie is also a lot about Bill Clinton. How did you feel about all that scandal surrounding him?

IF: It didn’t seem to interfere with his politics. Listen, I could never at the time, understand why his personal life was such a big deal.But clearly…I’m the only one who thinks that! All I’m saying is, it wouldn’t have been a problem in France!

Do you think Hillary has a chance to be president here?

What was it like shooting the film in NY?

IF: It weas great. I’d love to live here.

So what’s stopping you?

IF: Nothing, really. Nothing. In fact, you know what, I’ll think about moving here. I’ll live in my pajamas, in this hotel!

Can you walk around this city without anybody bothering you?

IF: Yeah, totally. I can, I can. And that means a lot to me, actually. Not like LA. That’s crazy there, with those paparazzi. That’s one of the benefits of…never having been in a hit movie! I’m joking. That was a total joke! What’s that you’ve got there?

The studio gave us these shirts, for the movie.

IF: God, that’s so small. Is that to save money?

I don’t know, but it seems like this shirt would fit over only…one boob! These gifts, they’re called swag.

You get better stuff. Don’t you get all those great things to wear, like for the Oscars?

IF: Not unless you’re nominated.

I’ve seen people walk around in that stuff, who aren’t nominated.

IF: Oh, you mean thieves. The thieves! Oh, wait. I think I have an important call. [Isla to her agent] Is that her? Okay, boobs on duty!