The Oscar-Nominee Expounds on Life, Career and His Latest Offering

In 2006, Terrence Howard received an Academy Award nomination for his lead role in John Singleton’s “Hustle & Flow,” and the song which he performed in the film became the first rap song ever to receive an Academy Award. That same year, he was also a member of the all-star cast (along with Sandra Bullock, Don Cheadle, Thandie Newton and Matt Dillon) of Crash, the Oscar-winning Best Picture.

Maintaining a powerful presence on the small screen as well, Terrence won one of his three NAACP Image Awards in 2006 for the HBO film “Lackawanna Blues,” directed by George C. Wolfe, which was based on Tony Award-winning Ruben Santiago-Hudson’s autobiographical play. His love of acting came naturally through summers spent with his late grandmother, the celebrated, stage actress Minnie Gentry.

Terrence began his showbiz career on “The Cosby Show” after being discovered on a New York City street by a casting director. That chance encounter helped him break into feature films, and soon he was cast in “Mr. Holland’s Opus.” 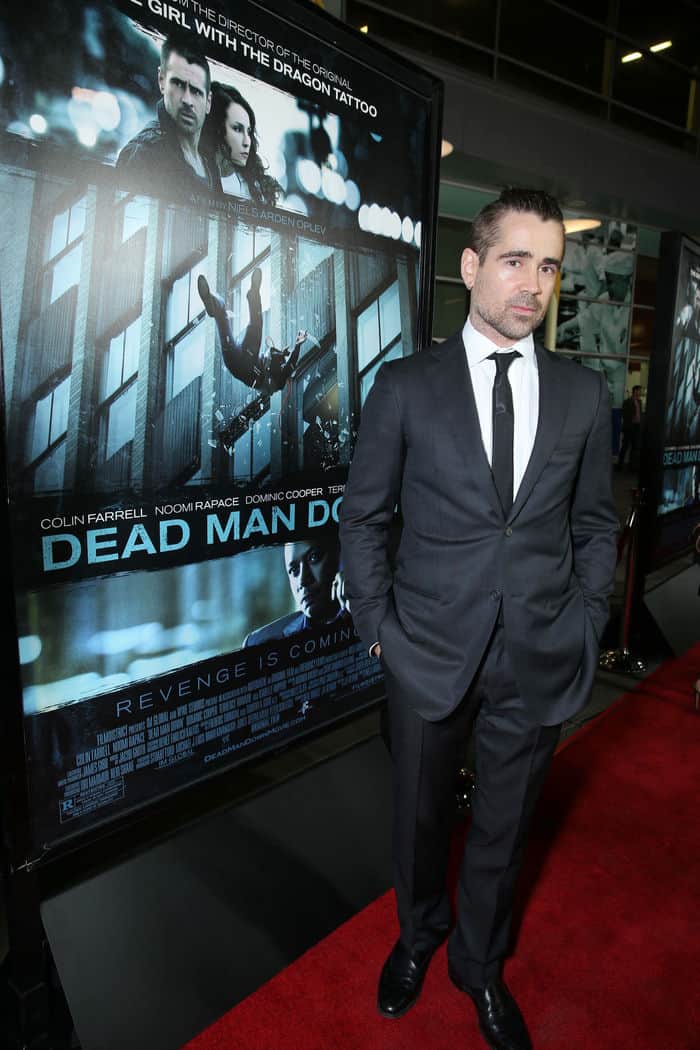 Among Terrence’s most memorable work are scene-stealing performances as Cowboy in “Dead Presidents” and as Quentin in “The Best Man,” the latter earning him an NAACP Image Award. His other film credits include “Pride,” “Angel Eyes,” “Hart’s War,” “Four Brothers,” “Idlewild,” “Get Rich or Die Tryin’,” “Fighting,” “Iron Man,” “The Brave One,” “The Hunting Party,” “August Rush,” “Awake” and “Red Tails.”

In 2008, he made his Broadway debut in a revival of “Cat on a Hot Tin Roof,” co-starring Phylicia Rashad and James Earl Jones. A self-taught musician on both the piano and the guitar, Terrence’s musical talents were in display on the big screen opposite Jamie Foxx in “Ray.” Also in 2008, Howard released his debut album on Columbia Records, “Shine through It,” which he wrote, produced and performed on.

Here, he talks about his latest film, Dead Man Down, where he plays crime boss Alphonse Hoyt opposite Colin Farrell, Noomi Rapace and F. Murray Abraham. 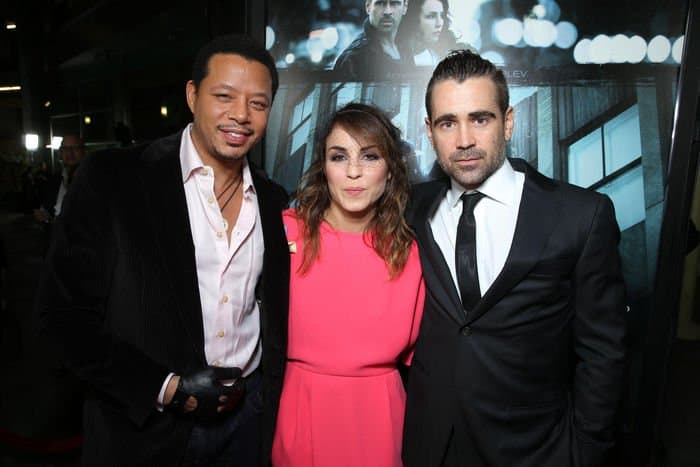 Terrence Howard: Thank you, Kam, for taking the time.

TH: Being able to work with Niels [director Niels Arden Oplev], given the work he’s done. Some of those Swedish films [such as The Girl with the Dragon Tattoo] were breathtaking. And he has an interesting style that mixes traditions of old with the allure of mystery. And I’m impressed with his Shakespearean approach to storytelling. It’s always about these relationships which become unwound. I was also interested in working with Colin [Farrell] again. We made Hart’s War together back in 2002, and I’ve always appreciated his artistry. So, I jumped at the chance to continue our friendship.

KW: The cast has a lot of other big names, too: F. Murray Abraham… Noomi Rapace… Isabelle Huppert…

TH: And everyone in there came to play. Everyone!

KW: Marianne Ilaw asks: Is a movie with an intricate plot like this one difficult to shoot? 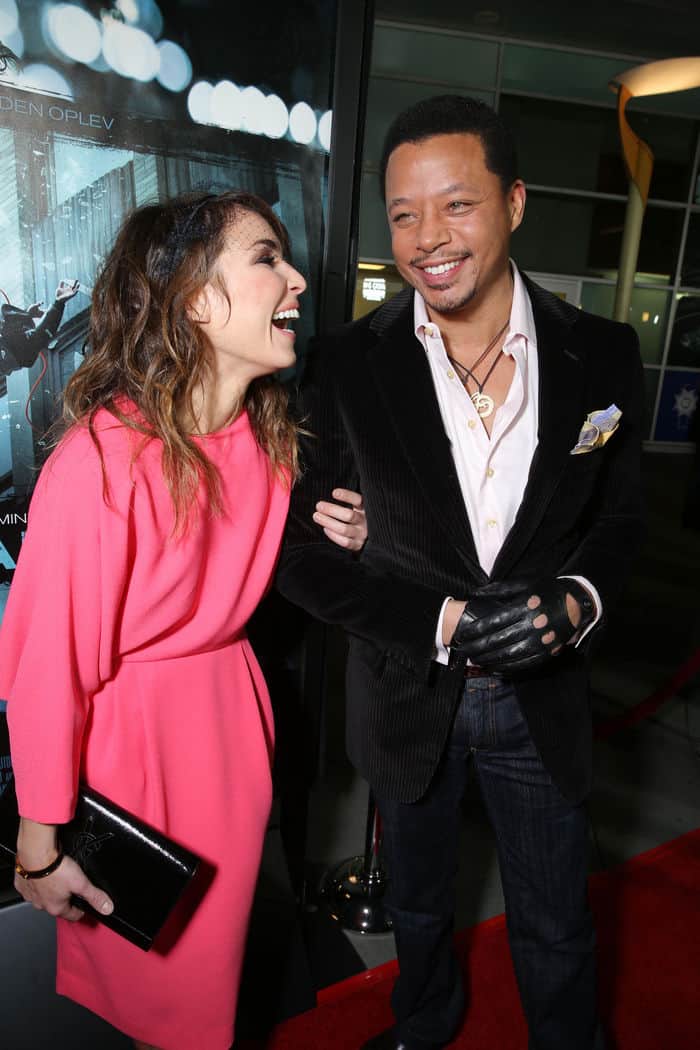 TH: To me, we’re all one, and everything is basically about trying to get back to a balanced state. We have our in-harmonics, our harmonic, and our beginning. Everybody’s trying to get back to that, and with this work, even as a director or as actors, we’re all trying to get back in harmony. But to expand, you have to become in-harmonic for a moment. So, the story’s about the battle to get back there, and that’s how it works out. Alphonse [Terrence’s character] could’ve been a simple bad guy who goes around killing people. But when you add a conscious element, and an element of reciprocity, a karmic recompense that he’s aware of, that simple ideal mushrooms to the point where it becomes palpable for everyone by association. The audience can now see his humanity because they’ve been in a compromised position. That’s the point of the film, to help someone learn. Take Colin’s character who was left for dead and whose family was murdered. Yet, here he has an opportunity for brand new love and to continue on and to just appreciate the fact that he’s still alive. But he’s willing to risk all of that to payback the debt, which nobody really knows the value of. When you take another person’s life, whether you survive or not, you only lose your own humanity in the process. That was one of the mistakes Alphonse made early on, which caused him all of these problems down the line. So, I love how Niels was able to lay out these complicated plotlines. And Noomi’s character is also on a vendetta and harbors a grudge that she won’t let go of. The film really questions the morality and ethical stances of all the characters.

KW: Attorney Bernadette Beekman asks: How did you prepare to play Alphonse Hoyt?

TH: I got a process, a perm in my hair. [LOL] That was my preparation.

KW: Marcia Evans says: I’ve loved your work in The Best Man, Pride, Red Tails and Crash, but your performance in Lackawanna Blues blew me away. It’s my favorite film. Have you considered spearheading a project similar to Lackawanna Blues?

TH: I’ve never heard that before. I’m really appreciative that Marcia said that, because I feel that the work I did in that movie was purely a product of the efforts of [director] George Wolfe. I fought him tooth-and-nail every step of the way on the set. Everything I wanted to do, he said, “No, you can’t! This is not going to be Terrence Howard Impersonation Day. You’re going to have to act today.” [Laughs] So, no I haven’t considered doing a similar project, because I prefer impersonating myself. But I would be willing to go down that path again under George Wolfe’s tutelage. He created that charter just like Niels created this one, Alphonse. You’ve got to give credit to the artist. I’m just a color in these directors’ films, and I really appreciate having had the opportunity.

KW: Professor/director/author Hisani Dubose asks: What type of character do you enjoy playing the most?

TH: I like the conflicted soul, the complicated human being. I’ve never been a perfect man. There’s always been a choice between right and wrong, and no one does a single thing for a single motive. There are many motives behind what we do, and when you dig deeper and try to find the base tone in the harmonic and in-harmonic, you create a palpable, three-dimensional individual. I like to search for balance in an unbalanced system.

KW: Editor/Legist Patricia Turnier asks: What advice do you have for an aspiring actor or actress? What is a major pitfall you would warn a newcomer to the acting field about? **

TH: Stop aspiring and just do it! Stop thinking and just follow your instincts the same way a half-billion sperm leaves our father and travels down the maze of opportunity inside our mother. No one tells them how to get there. If you don’t trust your instincts, you’ll get passed by another million sperm and might lose out on the opportunity of life, which is the opportunity to dream. Follow it! You already know where to go, you just have to trust that you know, and stop asking people for advice. You didn’t ask for advice to come to life, and it’s a hell of a journey to win a half-billion sperm race. That’s an amazing accomplishment. Compared to that, working in this industry is not that difficult.

KW: The Harriet Pakula-Teweles question: With so many classic films being redone, is there a remake you’d like to star in with an eye toward a particular role.

TH: Carmen Jones. I would love to play Harry Belafonte’s role in that.

KW: Harriet also observes that you work in film, TV and theater. She’s wondering how different is your preparation for each and which is your favorite performance medium?

TH: My favorite medium is the theater, but the theater has its limitations. The stage is really for well-established actors who have their money together or who don’t have a family to support. It’s more of an artist’s retreat. But I love the control you have as an actor in the theater as compared to the screen. Once you’re on film, the director and the editor, have the final say about your character, and often at the discretion of the producer and the studio. Television is a little more improvisational, but the stage is the only place where you can tell your story without worrying about editing.

KW: Film Student Jamaal Green says: I am a huge fan of your work. He asks: What is your favorite film and was there an actor you admired growing up who inspired you to pursue acting?

TH: That’s a great question, Jamaal. My favorite film would probably be Cool Hand Luke. Paul Newman’s performance was a revelation. It gave me an understanding because I had seen him in Cat on a Hot Tin Roof with Elizabeth Taylor. His portrayal of Luke seemed like what he had intended Brick to be in Cat had finally come to fruition. So, I loved the simple majesty with which he told his story in Luke. Another performance that impressed me was the work that Val Kilmer did in Tombstone. That was one of the most brilliant, modern-day performances I’ve ever seen. I am yet to see anybody trump that. I also love Sam Rockwell’s work. It’s explosive! It’s a gas!

KW: Larry Greenberg says: You have been so prolific as an actor and producer, is there any chance we will see you as a writer and director in the near future?

TH: God only knows what we have in store. Man makes his plan and God laughs. I have aspirations to do many things, but I lack the constitution of discipline to follow all those things through. Time and unforeseen occurrences befall us all.

TH: I see someone made in the image of God. Unfortunately, I also see too much of man scattered about my face with the insecurities and inadequacies and lack of understanding. And I see the source of humanity’s purpose in my eyes, and that’s the desire and attributes of trying to be closer to God with love and morality. But like Blanche [DuBois] said [in A Streetcar Named Desire], “It’s been a long time since I was made in God’s image.”

TH: [Chuckles] It’s a little different. I have a pretty remarkable memory. My earliest memory is from about three months prior to being born. I was searching for my own arm in the womb. I thought it was a friend, and didn’t yet realize that it belonged to me. [LOL]

KW: Thanks for another intriguing interview, Terrence, and best of luck with Dead Man Down. I loved the film!