Robert Selden Duvall was born in San Diego on January 5, 1931 to Mildred Hart, a descendant of Confederate General Robert E. Lee, and William Duvall, an admiral in the U.S. Navy. Robert served in Korea in the Fifties, before getting bitten by the acting bug while stationed at Fort Gordon, Georgia. After being honorably discharged, he moved to New York City, where he roomed with another aspiring actor named Dustin Hoffman.

Duvall made his big screen debut in 1962 as Boo Radley in To Kill a Mockingbird, thus kickstarting an illustrious and enduring career which would realize a half-dozen Academy Award nominations including a win for Tender Mercies. Among the legendary thespian’s more memorable 100+ screen credits are outings as a disgraced Southern preacher in search of redemption in The Apostle and as a crazy Army colonel in Apocalypse Now. 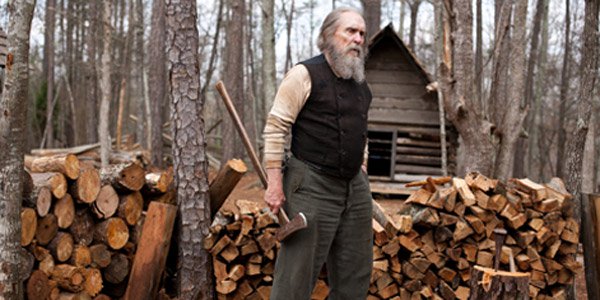 He also appeared in everything from The Godfather I & II to Lonesome Dove to The Great Santini to A Civil Action to Bullitt to True Grit to M*A*S*H to Network to The Natural to Deep Impact to The Road to Crazy Heart, to name a few highlights. His latest offering is Get Low, where he stars as a reclusive hermit who decides to throw himself a funeral party while still alive. The true tale, which transpired in Tennessee in the Thirties, also features Bill Murray, Sissy Spacek and Bill Cobbs.

Kam Williams: Hey, Mr. Duvall. Thanks for the time.

Robert Duvall: Yeah, how ya’ doin’?

KW: I’m honored to have this opportunity to speak with you.

RD: Thank you sir, and nice to talk to you.

RD: Well, the characters, really. My character’s terrific. And the screenplay, especially after they brought in Charlie Mitchell from Alabama who added some touches and embellishments to make it a true Southern tale. But Chris Provenzano’s initial idea of a guy who goes to his own funeral had already interested me a lot. I found it unique.

RD: I studied the part over the Christmas holidays in Northern Argentina, while looking at those beautiful Andes Mountains with a sense of peace, privacy and solitude, which I think this character had in his life. I’d find myself daydreaming a lot, and I just went with my instincts.

KW: Was that the biggest challenge in taking on this role, conveying the sense of solitude of a man who’d been a hermit for decades?

RD: I didn’t see it as a big challenge or as intimidating. I felt like I knew how to do it right from the beginning. Wherever it took me, I just went with it.

RD: I don’t know. That’s an individual thing, I guess. I suppose a sense of forgiveness and humaneness.

KW: Did you research the Tennessee folk legend the story is based on?

RD: No – No – I knew of it. The movie is based on that, but this is fictionalized. I just went with the good writing, my imagination and anything from my family in Virginia that had rubbed off on me.

KW: Attorney Bernadette Beekman says, given this movie’s storyline, would you like to attend your funeral?

RD: No way! No sir, once it happens, let it happen for real. No, I have no reason to do that, nor would I want to.

KW: Cinema Studies Professor Mia Mask asks, do you still love the smell of napalm in the morning?

RD: [Chuckles] I still have no idea what it smells like.

KW: Did you sense how enduring that line would be when you were shooting Apocalypse Now?

RD: No, I didn’t. But I do know that that phrase has become very famous. What’s funny is how someone will come up to me and quote it with a kind of attitude as if he or she’s the only one who’s ever appreciated the line.

KW: Children’s book author Irene Smalls asks, is there a mountain you still want to conquer in your career?

RD: There are quite a few wonderful projects out there sitting on the table as we speak. But the money’s not there, so we just have to wait and see.

KW: She also wants to know, what cinematic accomplishment you’re most proud of.

RD: I don’t know, I’ve been in a lot of wonderful movies. I love this one, Get Low, but I also still love the character I played in Lonesome Dove, the Texas Ranger [Gus McCrae].

KW: Larry Greenberg says, “I am a big fan. You have played some amazing historical figures Joseph Stalin, Eisenhower, Adolf Eichmann, Robert E. Lee. Do you have a favorite?”

RD: Robert E. Lee was the favorite, but the most challenging, and yet fulfilling, in a strange way, was when I played Stalin.

RD: Because the great Russian director Nikita Mikhalkov’s father, who worked under him and wrote the country’s national anthem, said I touched the soul of Stalin when I played the part. That’s the best review I could get from anybody in the world, coming from a guy who knew Stalin personally.

KW: When you played Robert E. Lee, did you channel him, since he’s an ancestor of yours?

RD: Well, somewhat, but plenty of other people in Virginia are related to him as well. All I did with Robert E. Lee was talk like my father, who’s from that part of the country, Alexandria. They speak with that soft “R.” It was very easy to cultivate that dialect, because I’d grown up with it around my dad and my uncles.

KW: Yale Grad Tommy Russell asks, how did it feel to be awarded the National Medal of Honor?

RD: I can’t think of one. I been asked a lot of questions. [Chuckles] I really have.

RD: Oh, I have ’em a lot when I get around [Godfather co-star] Jimmy Caan. I’ll be with him tonight, and I’ll have a good laugh, because I want to see his brother pin his 93 year-old mother in the lobby of the movie theater again.

KW: What do you mean by pin?

RD: A wrestling pin. He pushes her down to the ground and pins her.

RD: I’m reading a book about the Comanche Nation that they’re going to make a movie of, and I just finished a few about the Middle East that were pretty interesting.

RD: Oh, all kinds. I like Salsa and Pop, and I love Country Western music. Merle Haggard, and guys like that. .

KW: That makes sense since you’ve sung a lot of Country over the course of your career, including for your Oscar-winning performance in Tender Mercies. And most recently in Crazy Heart. When you look in the mirror, what do you see?

RD: My favorite dish to cook would probably be my mother’s Maryland crab cake recipe.

RD: To get all four movies financed that I have on the table waiting to be made.

RD: Lying in my bed, I think it was in Annapolis, Maryland, or maybe it was in San Diego, where I was born.

KW: Do you ever have moments when you’d like to have your anonymity back?

RD: No, no, no, whatever it is, it is. I get noticed to the extent that it’s flattering but not so much to be a nuisance. I’m just grateful for the opposite of anonymity, and that my work has been seen by so many people. I’m not plagued like some of these big movie stars who can’t walk down the street.

KW: The Tavis Smiley question: What do you want your legacy to be?

RD: Oh, I don’t know, that I did some good work in my profession, and that I had a good journey from the cradle to the grave without stepping on too many toes.

KW: Thanks again, Robert, and best of luck with the film.

RD: Thank you, sir, and have a good day.

To see a trailer for Get Low, click play: