Born in Atlanta, Georgia on December 10, 1985, Raven-Symone’ Christina Pearman moved with her family to New York City while still a toddler. By the age of two she had already been signed by the Ford Modeling Agency, and she soon started doing TV ads for everything from Cool Whip to Fisher Price toys to Ritz crackers to Jello.

Not long thereafter she would join Jello pitchman Bill Cosby on his popular, Emmy-winning sitcom, worming her way into America’s heart as adorable Olivia. She subsequently appeared on such series as The Fresh Prince, Hangin’ with Mr. Cooper, My Wife and Kids and The Cheetah Girls before landing her own show on the Disney Channel, That’s So Raven. 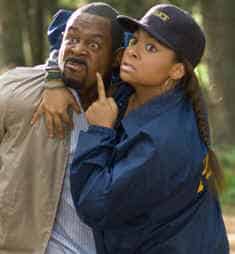 She made her big screen debut in 1994 as Stymie’s girlfriend in The Little Rascals, followed by well-received performances in Dr. Dolittle 1 & 2 and The Princess Diaries 2. Singing since she was 4, Raven has also enjoyed quite a musical career, releasing her first CD, Here’s to New Dreams, in 1993. And she is currently working on her fourth album which is scheduled to drop sometime this Spring.

Among her many accolades are seven NAACP Image Awards, including a couple just this year for That’s So Raven. The former child star deserves to be commended for avoiding the host of woes which have befallen so many of her kiddie colleagues en route to adulthood, such as her ex-roommate Lindsay Lohan and misfit mom Britney Spears.

Here, Raven talks about her new movie, College Road Trip, a family comedy where, opposite Martin Lawrence, she plays the teenage daughter of an overprotective police chief.

KW: Thanks for the time, Raven.

KW: How was it working opposite Martin Lawrence?

RS: He was very professional, although he’s so funny it was often hard to keep a straight face while shooting. But having watched and studied him, I knew what I was getting into. I knew what I had to prepare for, and how to react towards him.

KW: What message do you want audiences to walk away with from College Road Trip?

RS: That family is very important. And that, yes, everybody wants to grow up, but you have to realize that parents always think of their kids as that little boy or girl, so you have to help them see that you’re growing up and can handle yourself in a respectful manner.

KW: Have you mapped out a plan so that your fans who have known you as a little girl will accept you as a woman?

RS: Of course. I think any business you go into, you should definitely write up a plan, whether in Hollywood or in corporate America. And I think that even as a person, you have goals to reach, and you always want to refer back to what you want, although you can always tweak it. But yeah, I definitely take steps to show people that I’m growing, and hopefully they will be growing with me.

KW: What did you learn about showbiz during your formative years on the Cosby Show?

RS: Honestly and truthfully, since I was 3 to 5 years old, I think I learned everything subconsciously from their actions, namely, professionalism, to always be creative, and to always enjoy yourself, but at the same time know that this is a job, and to take it seriously because a lot of people’s livelihoods are at stake. So, you need to be professional.

KW: One of your fellow cast members in this film was Donny Osmond, another former child star. What was it like working with him?

RS: I have to say he was fabulous and down-to-earth. Even though he’s been in the business as long as he has, he’s still a real person. We sat down and talked, and he made me laugh.

KW: Did the two of you ever discuss your both having grown up in the industry?

RS: Yes, we definitely talked about it. We have a lot of things in common, surprisingly. I think that’s why I enjoyed him so much, because he knows these struggles that I go through, and because he overcame all of them and is still working to this day. He’s the type of person who’s cool about it when he’s spotted on the street even though he’s bombarded by so many people. He can still live a life; and I like that about him.

RS: Well, I still have college in my plans. I think you can go to college at any age. It depends on the person that you are. I had a lot of work after high school, so that wouldn’t have worked for me.

KW: When is your new CD going to be released?

RS: That’s still up in the air. They keep pushing it back. I’ve been very busy, and I still have to do the artwork. I’ll be going on tour from April all the way into August. I’m very proud of that, and I think I’ll always continue to have both aspects in my life, just because it’s a creative outlet for me.

KW: Which do you find more challenging acting or singing?

RS: How do I say this without sounding full of myself? Seeing that I’ve don’t both for so long, they’re not all that difficult. With my music, none of my albums really sold that much, so I need people to realize I’m doing this because I do really love to sing, to write, and to dance. When I perform, I don’t use a lip-synch track. I want people to realize that I’m not joking when I do all my work.

RS: The last book I read was The Fulfillment of Enlightenment by Deepak Chopra. I think that’s the title.

KW: Would you describe yourself as happy?

RS: Would I describe myself as happy… Yeah… [Laughs] I’ve never gotten that question before except from my psychiatrist.

KW: I got that question from Columbus Short.

RS: Oh, Columbus! You gotta love Columbo. He was on That’s So Raven. Yeah, I’m happy and definitely focused, although in this industry you go through your ups-and-downs just because not everything is going to go your way. Everybody has their days, but overall, yeah, I’m very happy with the way my life is going. And I’m healthy, and that should always make you happy.

KW: Jimmy Bayan, “Realtor to the Stars,” wants to know where in Los Angeles you live.

RS: I’m not telling nobody where I live.

KW: Can you just say what neighborhood?

KW: Are you ever afraid?

KW: Well, I’m sure you’ll enjoy nothing but continued success. Thanks for the interview, Raven, and good luck with this movie and all your upcoming projects.

RS: Take care, and have a good day.