Upon completing work on his bachelor’s degree, he landed a lead role in Eminem’s semi-autobiographical bio-pic 8 Mile. He has since appeared in over a dozen movies, most notably opposite 50-Cent in Get Rich or Die Tryin’, Halle Berry in Things We Lost in the Fire, Richard Gere and J-Lo in Shall We Dance, and Drew Barrymore and Robert Duvall in Lucky You. 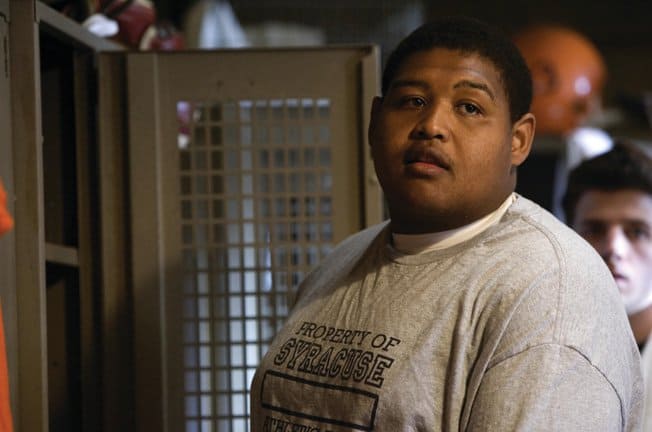 He’s even tried his hand at writing, directing and producing, making Gordon Glass, a low-budget family comedy in which he handled the title role. On television, Omar has been on such shows as The West Wing, Law & Order and Sex Love & Secrets.

KW: Hey Omar, thanks for the time.

KW: What interested you in playing Sam Train in Miracle at St. Anna?

OM: What didn’t interest me in playing Sam Train? He’s like a superhero, except in real life. I had read the book when it initially came out, and I felt, “Wow! This is exactly something I’d like to do.” And then the opportunity came up while we were shooting The Express. I got this text message saying Spike Lee was doing a World War II drama and, yeah man, I did everything I could to get in front of that guy. And he picked me. He said, “I want you to do it.” Then he put me on this tight regimen where I had to lose about 50 pounds in 9 weeks.

OM: If you see both movies, you’ll see I’m a blubberous lineman in The Express, and a much less blubbery soldier in Miracle at St. Anna. What’s interesting is that both these films tell stories that needed to be told, in my opinion, because you never learn anything in school or during Black History month about the Buffalo Soldiers or the African-American military campaign during World War II.

KW: I agree. And what attracted you to the role of Rob Brown’s buddy Jack in The Express?

OM: When I read that book, I was embarrassed that I had never heard of Ernie Davis, although I knew about Jim Brown, Floyd Little and the Syracuse University legacy. And the more research that I did, watching film and reading about him, the more intrigued I became. I realized he was a humanitarian and an American hero whose story deserved to be told. And I think it’s going to inspire millions, because people are going to see this film and love it. I’ve seen it with audiences four or five times and not once has it gotten a bad response. People love this movie.

KW: Did you have an interest in acting as a child?

OM: No, none whatsoever. I played sports. The acting thing was just a direct blessing from the Lord, because I lost my discipline to play sports, and I had this really cool professor grab me and kind of take me under his wing, and the ball just started rolling. Another professor introduced me to my first agent, and the next thing you know, I got to start doing films. It was great!

KW: What would you say was your big break, 8 Mile?

OM: Without question. After 8 Mile came out and blew up, the ball has been rolling ever since.

OM: The type that aren’t specifically written for guys who are 6′ 6.” Normally, I try to stay away from playing security guard type characters, the stereotypical, big man fare. And I’ve been pretty blessed, man, and successful at getting out of the box.

KW: Bookworm Troy Johnson wants to know, what was the last book you read?

OM: The most memorable book I read recently was Christ the Lord: Out of Egypt by Anne Rice. It was a departure for her from her normal evil vampire type fare. This book delved into the possibilities of what it might have been like to watch Jesus as a child. It was very interesting.

KW: What did you think of the job James McBride did in adapting Miracle at St. Anna, having read the book?

OM: Spike’s vision for the film definitely burst out of the beauty of the book. But I think it’s a different animal. It’s tricky, because it’s very difficult to jam a novel like that into two and a half hours.

KW: Do you think it helped in this case that the author also wrote the screenplay.

OM: Without question. From what I understand, he and Spike would go through it together ten pages at a time.

OM: I live in Glendale now. It’s actually a really nice community. I hadn’t been hip to it. I just stumbled upon it by accident because a buddy of mine needed me to pick him up out there. And I was like, “Gee, this is nice.” Around the same time, I was blessed enough to be able to buy a house, so I moved over there.

OM: Before I left to go to college, I was living in Orange County, Anaheim Hills. And prior to that I was in Long Beach. That’s where I spent most of my childhood and where my mother and brothers are now.

OM: I’m listening to the new Beck, Modern Guilt, and to a buddy of mine named Johnny Fair who sings soul, R&B. And I’ve been listening to that Citizen Cope album. I can’t wait for his new one to come out. He’s more of an independent, undergroundy kind of guy.

OM: [Laughs] No, you guys are pretty thorough.

KW: What message do you hope people will take away from The Express?

OM: I hope they come away with the inspiration that you can overcome any obstacles in your path. Ernie Davis had the cards stacked against him completely, yet he was able to accomplish great things through perseverance, courage, diligence and his own grounding though his family and his faith. I sincerely hope the film challenges people to take an introspective look at their lives and see how they fit into the world at large, and see what kinds of positive changes they can make, because in researching for this film we didn’t find one person who had met Ernie who hadn’t been positively influenced by him. Not one. And I think this comes out on the screen. So, even in death, he was still triumphant. That’s admirable.

KW: How do you want to be remembered.

OM: As a righteous dude!

KW: Thanks again for the interview, Omar. I appreciate the time and I’m expecting bigger things from you in the future.

OM: Hey, I appreciate that.

To see a trailer for The Express, visit: http://www.theexpressmovie.com/site.html#/videos/1/1/

To see a trailer for Miracle at St. Anna, visit: