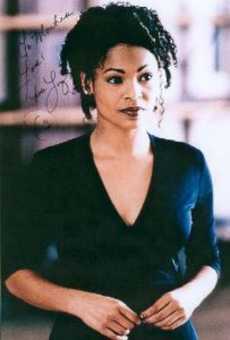 Who ever heard of an actress being typecast as pregnant? That’s exactly what appears to be happening to Nia Long lately. In 2004, the talented thespian of Trinidadian extraction appeared in Alfie, where she played the playboy’s knocked-up ex-girlfriend, Lonnette.

Then, last year, we found her expecting again in her very next movie, Big Momma’s House 2, where she was reprising the role of Sherri opposite Martin Lawrence. Nia seems to be stuck on the mommy track, because, now, as Suzanne in Are We Done Yet, she’s about to give birth to twins. Here, the fetching beauty, who was named one of the World’s 50 Most Beautiful People by People Magazine in 2000, talks about this latest outing opposite Ice Cube.

KW: How would summarize the storyline of this sequel to Are We There Yet?

NL: What happens is: Nick decides to sell the sports bar to start his magazine. And when the family finds out I’m having twins, we’re like, “Oh my God! We’re gonna need more space.” So, we move outside of the city to get more for your money, and we find this beautiful, old home that needs a little work. But then, once we move in, we realize that it’s falling apart at the seams.

KW: Besides being pregnant, how is your character different?

NL: In the last film, you saw her, she was troubled. She was going through a divorce… her ex-husband was playing games… It was “Where are my kids? Where are my kids? Where are my kids?” In this one, you see her as sort of this resolved woman who’s like, “Okay, I’m pregnant, I’m married, I’m not working, I’m a stay-at-home mom, and this is my new life.” And so, with that, you see a lighter part of her personality. She’s much more optimistic about things. She wants everything to be great, but she’ll still tell you like it is. She’s not a fool.

KW: So now, we have Chuck [John C. McGinley] playing the heavy.

NL: I didn’t really know what to expect in terms of how he was going to play the character. I love that he’s just completely over the top. But the thing is he’s so consistent with it, that it works. ‘Cause there just are people like him in the world. So, it’s good.

KW: This means your character has a lot less drama this time around.

NL: See, that’s the thing. Suzanne, she’s always conveniently gone, because she’s pregnant. I’m not getting out on a ledge with a raccoon. “Honey, be careful, and let me know where you left the money. So, if anything happens to you, I know where to go.” [Laughs]