He was one of the most influential Israeli recording artist in his homeland of Israel, but had to expand, which meant leaving and arriving in the entertainment capitol of the world – Los Angeles. The result? One Emmy, a Brit Award, many other awards, an indelible mark on American cinema with his noteworthy scores, and kudos from his peers that- like his hundred plus compositions- would stand the test of time.

An Exclusive Interview with Misha Segal

By The Hollywood Sentinel

The Hollywood Sentinel: Classical music does not get the major publicity that other genres of music do in popular culture such as pop music and rock. Yet it is equally if not more important. Why do you feel that is, and should classical be more publicized or is it how it should be? 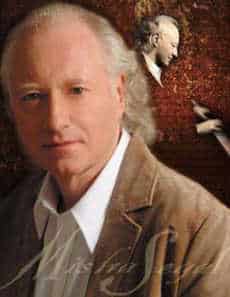 Misha Segal: When a culture gets degraded, the standard for everything, education, arts, social behavior etc., also degrade with it. Any music that can be understood can be enjoyed. The same goes for any field of endeavor. When I first came to the U.S. and saw the first football game I asked my friends – what the hell kind of a game is this, nobody does anything at all, they talk and talk and then they jump on each other looking for the ball and that goes on for two hours. Obviously, I did not understand the game and could not appreciate it. Americans never understood why the whole world was excited about soccer – well, now they get it. So if you stop educating people and the big corporations are in it only for the money and keep lowering the standards so that they can sell – sell – sell, then any art form goes down the chute to the lowest common denominator and people get to enjoy only four letter words, sex and booties… Well, that level can be understood very easily by anyone. Rhymes in songs used to have rules, which coincided with knowing the language. “Down” and “Ground” don’t rhyme but tell that to Akon. So classical music is so far off now. But it’s the same in jazz. People used to enjoy Coltrane and he was very complex. Then came Kenny G. I rest my case. No education equals degradation.

The Hollywood Sentinel: Haha. I won’t tell Kenny you said that! What motivated you to become a pianist and composer? Were there many times you wanted to just give up and quit, and if so why and how do you overcome these feelings?

Misha Segal: I did not need to be motivated. I knew I had to do music since I could think independently. I always asked to go where there was a piano. Unfortunately I was not encouraged at home and wound up starting late. I never felt like quitting because I never had a “plan B.” I never did anything but music and never will.

The Hollywood Sentinel: We often hear about the artist or musician feeling so called ‘divine inspiration,’ as if their creative flow is coming from another worldly source outside of their own being. Do you believe in a spiritual essence greater than yourself that ever touches you and infuses your work, and if so how and why?

Misha Segal: Well, I would not argue with someone who thinks it’s coming from “someplace else.” I personally believe that “all those places” are still our places. I sometimes wake up in the middle of the night and hear an entire piece, complete. Well, it can seem as though it “came from another place” but I know (at least for me) that whatever universe it came from, it is still my own universe. It is very spiritual in essence – of course but for me the field of spirituality does not have to mean necessarily that “other universes” come into play. If I want to I can experiences other universes, I believe we do this all the time. But when I create, I believe that it comes from my experience and from my own universe. There are influences which I accept very affectionately but I never confuse them with “it came from someplace else…” To me, if it feels like it comes from “another place” I believe that it is still my own universe except – maybe long, long ago.

Misha Segal: The answer is no. for me music is an individual expression that can influence physical phenomena but whatever it affects or whatever it is constructed from, it is still the magnitude of the artist’s talent, his ‘beingness’, his scope of expression, education and ultimately genius which are the driving forces. Maybe a good analogy (albeit a simpler one) would be to ask an opera singer if they intend to break glass with their voice. I don’t think that is what is intended when one learns to become a singer. But if Caruso or Domingo or Pavarotti inadvertently crack a glass, that is something for scientists to figure out and possibly admire.

So in short, any accompanying phenomenon to me is incidental. The main point is that the artist has a message and can communicate it. How great it is, or how well all peripheral phenomena can be measured is only a test of the size of the artist. Beethoven, probably one of the top five most important artists of all time, evolved like no other composer. I went with two friends to listen to Andras Schiff play his last three piano sonatas. It took about two hours to complete. When he finished there was a huge moment of silence in the audience at Disney Hall. I think that no one of those two to three thousand people in the hall had any physical sensation of chair, pants, body or anything else. Time froze and space was infinite. The lights were not even the actual lights. Is there deeper infusion of energy on quantum levels – oh boy, I would be surprised if a black hole might not have been created as a result. But Beethoven just wrote a sonata for piano.

Misha Segal: This is a very tough question. First of all, I am not really a ‘classical artist.’ I wrote some classical pieces and I am an educated musician but I do not engage in classical music as my main field of activity in music. There was an era before radio and recordings, when the world was silent. I mean literally silent. Other than the sound of horse carriages and the sound of the horseshoes being nailed to the hooves, there were no sounds. Maybe baby cries, rain or two men fighting. The only way to listen to music was to go to somebody’s home or to a concert hall, or church and listen to musicians play music. There were no elevators and supermarkets that played music all day long. Mankind has long forgotten the experience of listening to music out of total silence.

The day when music was recorded was the end of the art form because there is no art in a piece of vinyl or CD. There is no art in listening to the exact same performance of a piece for a hundred years. This is why Arturo Benedetti Michelangeli, one of the greatest pianist’s of the 20th century, refused for years and years to sign a record deal and did not allow recordings of his performances. Paintings are forever but not music. Music is for the time of the performance when a real musician communicates with real public. So the question of how the new changes impact music is no longer of any importance. Anthony Hopkins (the musicologist, not the actor) stated in his work “Book of Composers’ that music has been degraded to being ‘wall paper.’ This was written in 1986 and it is as valid now as it was then and it will continue to be valid for a long, long time.

We have entered the dark ages of art unfortunately. And this is not surprising. If you want to suppress a society and bring it to its knees and control and enslave it, you can do it very simply by introducing both street drugs and psychiatric drugs to every citizen on the planet -this is not a far off reality- you make sure education standards get lower each passing year until people can barely read or write, you can scare a population with horrible news on T.V. and radio all day long, you can make sure the economy is never stable, you can create many wars and – last but not least, you can make sure that artists and the arts are so suppressed and so degraded until they lose the power to inspire and remind people what they were living for. And this phase has begun a long time ago and is continuing as we speak with tremendous force. Every decade the technology for producing and distributing music changes only to help degrade the art more and more. MTV was one phase, the computers, which allow anyone to produce (what sounds like) music, YouTube, well, there is no reason to continue along this line. It will take a huge counter force, this is not a one-man-job (although it could be) to turn things around. But that would mean eradicating ‘Prozac’ and ‘Ritalin’ too. It would mean a huge shift in society’s education and thinking. And right now we are not even close. People ask “what is the state of music today?” and I ask “what music?”

Misha Segal: Scientology has trained me and educated me about life in general and about people and relationships with people in particular. It also expanded my horizons spiritually which is to say, it opened windows for me to see and experience parts of me and my world, which would have stayed “asleep” had I not taken this path. When one grows more aware and becomes more alive and sharp, his creativity benefits markedly. That is how one’s playing and composing improves, by improving one’s existence and expanding one’s ability to be more alive.

Misha Segal: Every time I listen to a master at work, be it a jazz musician like John Coltrane, a grand composer like Gustav Mahler, an R&B singer like Aretha Franklin or an Irish singer singing Celtic music honestly and soulfully I go through spiritual experiences. That is what true art and true expressions are. They are spiritual journeys through the realm of the highest form of aesthetics offered on this planet. That is why art needs to be supported, sponsored and encouraged. It’s the only thing other than Scientology that gives mankind freedoms he normally does not have.

Misha Segal: I am working on a new concept as an artist, which is most important to me right now. It is a project of mammoth proportions and only time will tell whether it will be possible to accomplish. It is an expensive endeavor but that is my calling now and that is what I must do as an artist.