Kevin James was born on April 26, 1965 in Mineola, New York, but raised in Stony Brook, Long Island where he excelled at both wrestling and football. In college, he majored in sports management while playing fullback on the football team, but dropped out after three years to pursue a stand-up career.

Kevin got his big break when he landed a recurring role on his pal Ray Romano’s sitcom, Everybody Loves Raymond. In 1998, he parlayed those appearances into his own hit sitcom, The King of Queens, which went on to enjoy a nine-year run. 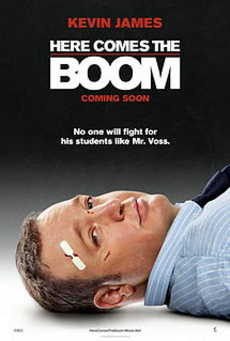 James has made just as a big a splash on the big screen, starting with a memorable, feature film debut opposite Will Smith in the hilarious romantic comedy, Hitch. Since then, the versatile funnyman has starred in everything from I Now Pronounce You Chuck & Larry to Paul Blart: Mall Cop to Grown Ups to Zookeeper to Hotel Transylvania.

Kevin and his wife, actress Steffiana De La Cruz, live in L.A. with their three children. Here, he talks about his new film, Here Comes the Boom, where he plays a biology teacher who moonlights as a professional Mixed Martial Arts fighter to raise enough money to save a colleague’s job.

KW: I really enjoyed Here Comes the Boom. It’s a very entertaining, family film. What inspired you to write it?

KJ: I’m glad you liked it! Basically, I’ve always been interested in the mixed martial arts, and I had some ideas about how to show the sport in a different light. But I also wanted to give some props to all the great teachers who had helped me and served as very positive role models when I was growing up, especially since they continue to influence me to this day, so many years later. I wanted to show how much of a difference a teacher can make in a child’s life by putting them on the right path.

KW: Was there one teacher in particular you’d like to give a shout out to?

KJ: Yes, Mr. Betcher. I named the principal in the film after him. He was a great teacher, but I had a bunch of them who were fantastic, I really did, who were cool with me, supportive, and taught me to be a good man. That’s important. You don’t realize the effect it will have.

KW: Editor/Legist Patricia Turnier asks: What do you want the audience to take away from Here Comes the Boom?

KJ: Because it’s a comedy, I primarily want people to escape, have fun, and really enjoy themselves for a couple hours. But, secondarily, it does have an inspirational message about the amazing effect that one can have on others when you start becoming the better version of yourself. We all become complacent at some point in our lives, and sometimes it takes the inspiration of others to get going again. In the case of this movie, I not only help Henry Winkler’s character save his job, but my actions uplift the students and other people around me. It sort of pays it forward.

KW: Patricia also says: You wear many hats, as an actor, comedian, writer, and producer. Which do you enjoy the most, and which is the most challenging?

KJ: They’re all challenging when you’re wearing them simultaneously. They’re all rewarding and can be kinda scary, and the responsibility becomes that much greater, obviously. But I surround myself with great people who keep me in check, which is important. For instance, they’ll always help me to get to that place where I need to be, if I’m not doing what I need to be doing in a certain scene, creatively. Then I have some other people in my life like my makeup lady who’s the worst, but then she has a tough job, too. [Laughs]

Congrats on a wonderful romantic-comedy performance, a genre at which you’re a master.

KJ: Wow! That’s very sweet, Harriet! It’s nice to show that, with a little extra effort, a guy who’s not only an underdog in Mixed Martial Arts but an underdog in love can prevail in both.

KW: Harriet also asks: What other types of roles do you see yourself in that are still out there waiting for you-even if it means there’s no Selma for you at the end of the film.**

KJ: It all depends on the story. It always has. It’s not like I say, “I have to do another comedy next,” or “I have to do a drama next.” Wherever the story takes me and whatever moves me in a fresh direction. I like to let it just happen.

KW: Harriet was wondering whether there’s a remake of a classic movie you’d like to star in? She suggest doing Kirk Douglas’ role in Detective Story?

KJ: Wow! I’ve never seen Detective Story, but I’m sure it’s a great movie. I’ll definitely look into it, if she feels it’s worthy of a remake. That could be very cool.

KW: Dinesh Sharma asks: Would you say this film used Mixed Martial Arts as a metaphor for school reform?

KJ: Absolutely! It’s a metaphor for any obstacle you might have in your life. This is not to say that taking up Mixed Martial Arts will solve your problems. [Chuckles] It’s not that at all. Rather, it’s used to show how far my character, Scott Voss, would go for a friend. He’s willing to lay down his life. There’s no greater gift than that.

KW: Dinesh also asks: Did you do most of your own stunts?

KJ: Yes, I did all my fight stunts in the movie. We wanted it to look real. I had a great stunt guy that worked with me, Jason Lambert. He helped me every step of the way, setting up all the fight sequences.

KW: Attorney Bernadette Beekman says it looks like you really took a beating making this film.

KJ: [LOL] I did, actually. I took a real crazy beatdown, but I wanted it to look realistic, because I think people really appreciate the difference.

KW: I guess that as a former wrestler football player you could handle the physical contact.

KJ: Yeah, I’ve always been an athlete and enjoyed sports. I just got out of shape when I switched vocations to stand-up comedy. But I’ve always, always loved getting physical, whether in my movies or playing sports growing up. I just love physical humor, so I kind of tied it all together here.

KJ: Oh, man, we laugh all the time. Honestly, we literally laughed on our way down here today. We were crying in the car. It’s important to surround yourself with friends that you can make fun of and have fun hanging out with. Life is a quick ride, and there’s nothing better than a good laugh.

KJ: Food, I guess, but I don’t even feel that guilty about it anymore. That’s the sad part.

KJ: I don’t cook that much, but when I do prepare something, I make it extremely spicy, whatever it is, even if it’s just Kraft macaroni and cheese out of the box, which I love. I have to add hot sauce to it.

KJ: My best, I guess, was to believe in myself and to invest in myself, and to get into stand-up which was a scary move, because it involved giving up the conventional route of going to college to pursue what I really wanted to do. I went down that road blindly on faith, and it worked out for me. I think it was God-inspired. And one of my worst decisions was ignoring a buddy who suggested I invest in Apple.

KJ: It depends on what time of day it is. If it’s after lunch, I see a tremendous shadow. [Laughs] Seriously, I see someone who is doing his best to get better and better.

KJ: My first meal, and I was still inside my mother’s tummy. [LOL] I can’t remember anything from last week, so I don’t think I’m remembering anything in utero.

KJ: For three more wishes. That’s a smart one, right?

KW: The Melissa Harris-Perry question* *How did your first big heartbreak impact you?

KJ: Musically, because music got me through it, and music has helped me with other every aspect of my life as well.

KJ: I had a little Neil Diamond going on, although I’m generally all over the joint, because I can go from that to the craziest music.

KJ: Clifford, the Big Red Dog. It was a good one. He ends up finding his way home and eating some cupcakes.