Kellee Stewart was born in Norristown, Pennsylvania on April 15, 1976 where she developed a love for the stage at an early age, appearing in school productions and studying drama at Philly’s famed Freedom Theater. She later attended SUNY Purchase where she would earn a bachelor’s degree in acting. After graduation, she appeared in Off-Broadway plays and worked as a modeling agent in NYC, before heading west to try to make it in L.A.

In Hollywood, she landed recurring roles on several TV series, including the WB’s “Living with Fran,” Comedy Central’s “Wanda Does It” and the UPN’s “Sex, Love, & Secrets.” But Kellee is probably best known for her breakout performance as Bernie Mac’s daughter Keisha in the feature film Guess Who? On the big screen, she has since appeared in the blockbuster comedy Monster-in-Law and in the recently-released indie flick I’m Through with White Girls. 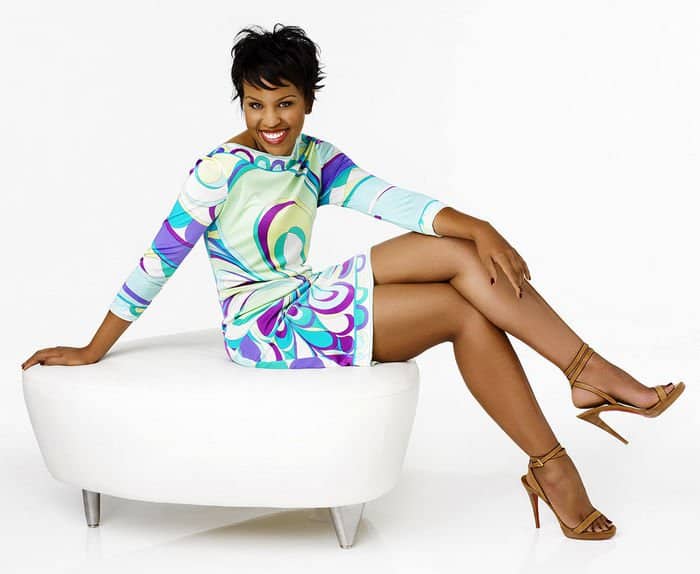 Here, she talks about her career and about new TV show, TBS’ “My Boys,” a sitcom set in Chicago where she co-stars opposite Jordana Spiro.

KW: Hi Kellee, thanks so much for the time.

KS: Oh, thanks for having me.

KW: Congrats on My Boys being renewed for a second season.

KW: How do you like the evolution of your character, Stephanie?

KS: Oh, I love it. Stephanie actually writes a book about dating.

KW: I know. I watched the season premiere and the next episode, and saw how you and boyfriend had problems while vacationing in Italy. Is he written off the show now?

KS: Yes, he’s gone. Lance [played by Schuyler Yancey] and I broke up. On the heels of that, Stephanie wrote a book and becomes famous, so some fun things start to happen.

KW: I like that your character isn’t the stereotypical African-American sidekick. Not that very limited best friend we usually see, but a much more complex and well-rounded individual.

KW: So, was this a case of colorblind casting?

KS: When I went for my audition, I saw every ethnicity there. Caucasian women, black women, Asian women –

KW: How did they settle on you?

KS: It was really about finding the right chemistry for the entire ensemble. After I read with Jordana Spiro for [show creator and executive producer] Betsy Thomas during a call back, they decided to screen test me with her. And after we finished, as I was getting into my car to drive home, my phone rang, and they said, “Don’t leave, you got the job. Come back for the table read.” And when I sat down for the table read I had not yet been introduced to any of the other actors. My first line was “Hi Mike – hi Kenny.” I delivered “Hi Mike” in a nice way, but I decided spontaneously that I didn’t like Kenny. So, I said, “Hi Kenny” in a very nasty, sarcastic manner, and he looked back at me and grunted and shot me this disapproving look which made the audience crack-up. And instantly the chemistry of our characters not liking each other was found. I believe that happens when the right actors organically just go with the flow and go with the moment. I hadn’t even shaken his hand at that time. Now, here we are starting season two and we still can’t stand each other and we don’t even know why, but it works.

KW: Do you think your experience as a modeling agent has helped you in landing roles?

KS: I think being on the other side of the desk helped me in terms of gaining a perspective on the business. I learned not to take everything personally or so seriously, because sometimes you’re just not right for a particular job. You have to be able to take rejection quickly and honestly, know what you need to work on, and move on, all kind of in the same instant.

KW: Why is it I sense that you’re a bit of a perfectionist.

KS: [Laughs] A little bit. I think that what makes my job so much fun is that I continue to try to grow. I still take acting classes and go to improv shows.

KS: There are a lot of great actors and actresses out there who are trying to get the same jobs that you are. So, you’ve got to give it your best shot and think “I’m going to go for it and not look back.”

KW: That reminds me of the documentary Confessions of a Superhero, which follows four struggling actors who panhandle on Hollywood Boulevard to survive in between auditions while they’re waiting to make it.

KS: The things that dreams will make you do. Giving up is not an option if you want to succeed. That’s how I feel about it. If you really want to be in this business, and it’s something you can’t live without, you just have to keep going. And one day that shot will be given to you.

KW: I think there’s an “It” factor which some people have and some don’t. After seeing you on this show, in Guess Who and I’m Through with White Girls, I’d definitely say you have that certain something. Despite playing the second banana, there’s something magnetic about you which enables you to shine and almost upstage the lead.

KS: Oh, thank you. I appreciate that. I try.

KW: I’m guessing that it’s a combination of attractiveness, intelligence, persistence and the “It” factor. So, when are going to land your feature lead role?

KS: [Laughs] I don’t know. Hopefully, soon. I still feel like I’m getting my feet wet.

KW: What did you think of I’m Through with White Girls? I thought it was a charming little romantic comedy.

KS: I actually haven’t seen it. Lamman Rucker, who plays my love interest in it, recommended me for the role. He’s a friend of mine from way back.

KW: He’s an excellent up-and-coming actor who’s been in a lot of movies lately, including Meet the Browns and Why Did I Get Married? Tell him I want to interview him, and that I’m friends with a friends of his, Al Flowers.

KS: I will. I’ll pass that message along to him.

KW: Are you anything like your character Stephanie in real life?

KS: I’m like her in the sense that she lives her life by a set of rules that work for her. I’m pretty much the same way, although I’m not as girly as she is. She’s also this smart, on top of her game woman, and that’s where I identify with her.

KW: Troy Johnson, the bookworm, wants to know, what was the last book you read?

KS: I am very happy, and I’m content with living each day and just being grateful first that I woke up and have another opportunity to have a good time. So, yes, I’m very happy. I love that he suggested that question, because nobody does ever ask that. When I come home, the parents of some of my friends ask me things like, “When are you going to get married? When are you going to have kids? What are you going to do with your life?” But they never ask me if I’m happy. I’ve actually had this conversation with my mom, because nobody asks you that. They think you need to fit into a certain mold to be happy. Bu I’m ecstatic about the way my life is going.

KW: Great.The Tasha Smith question: Are you ever afraid?

KS: Hmm – interesting. Am I ever Afraid? Yes, I’d be lying if I said I wasn’t. But somewhere, faith creeps in, and fear goes away.

KS: As being honest, and as going about my life with integrity.

KW: The “Realtor to the Stars” Jimmy Bayan question, Where in L.A. do you live?

KS: I live in the Carthay Circle, Beverly Hills area.

KW: Can you still go to the movies and the supermarket without being bothered by fans?

KS: Absolutely! This is my job. And my job is no more important or special than anybody else’s. So, I don’t find myself thinking, “Oh, I’m going to get recognized, today.” That is not a part of my psyche at all. On the occasions that I am recognized, I say, “Thank you,” but you can’t place yourself in a bubble.

KW: Is there a question nobody ever asks you that you wished somebody would?

KS: Yeah, what advice would you give young women today?

KW: Okay, what advice would you give young women today?

KS: Don’t believe the hype of the things that you are reading and seeing on TV and in movies. The reason that I say that is because when I was growing up, we didn’t have this super-skinny, flawless image to compete with. Far too often, I see it now that actresses are displayed in a way that seems very airbrushed and hard to attain. I find it unfortunate that young women may look at those images and think that is the ideal of beauty. It can cause a lot of problems and self-esteem issues if we don’t remind girls that being healthy and exactly who you are is the main thing. I’m grateful I didn’t grow up with those images. If I were growing up today, and I thought that was the ideal standard, I think I might be in a little trouble. I’m a black girl with curves and a butt, and I’m going to continue to embrace my femininity and to be comfortable in my body, even on TV. That doesn’t mean that I’m not insecure at times, but it does mean that at least I know who I am and that I’m not trying to fit into somebody else’s pants. I’m just going to fit in my own.

KW: I think that naturalness is part of your beauty that comes through in your work. How do you feel about all the murders in your hometown, Philly?

KS: How do I feel about it? It’s just insane! It leaves you speechless, because I don’t understand what’s going on in our communities that we have left out the option of talking. People are resolving problems in the absolutely wrong way, and innocent bystanders are losing their lives. I feel that we all need to take responsibility by turning your neighbors or starting a program at your community center or a school that will help young people have a purpose. If we as a community don’t take responsibility for every crime that happens, then we are just onlookers. Enough is enough. Kids should be able to go to their high school graduations without being shot in the back. When I heard about that incident it broke my heart. It only takes for one person to remind you that you are special, and then your whole life is changed.

KW: Great idea. Thanks again, Kellee, and best of luck with the show and your career.

KS: Thank you so much for your time, Kam.

To see a clip of Kellee