The Great Young Stars in The Great Debaters

In The Great Debaters, Jurnee Smollett and Denzel Whitaker more than hold their own opposite a couple of Academy Award-winners in Denzel Washington and Forest Whitaker. These accomplished young stars deliver powerful performances portraying members of all-black Wiley College’s 1935 debate team which won the national championship. 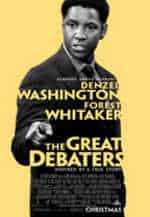 Born into a family filled with talented thespians, Jurnee’s siblings, Jazz, Jake, Jocqui, Jussie and Jojo, are also professional actors. Only 21, she already has won a couple of NAACP Image Awards, both for her work on the TV series Cosby.

Jurnee got her start at the age of five on TV, enjoying recurring roles, in turn, on such shows as Hanging with Mr. Cooper, Full House and On Our Own. By the age of 10, she had landed her first title role on the big screen, as Eve in the critically-acclaimed Eve’s Bayou.

17 year-old Denzel’s resume’ is practically as impressive, as he made his auspicious acting debut at 11 opposite Denzel Washington in Training Day. Since then, he’s appeared on numerous television programs, including One on One, ER, All That, The War at Home, Teachers, and The Suite Life of Zack and Cody.

Here, the gifted pair share their thoughts about their latest outing as James Farmer, Jr. and Samantha Booke.

DW: Not a problem. How’re you doing?

KW: Great. How intimidating was it for you working with Oscar-winners Denzel Washington and Forest Whitaker?

DW: Because right when you step into the audition room, Denzel demands a certain level of professionalism. Also, he sets a professional tone, and a collaborative tone among everybody. Nobody’s bigger than the rest. It’s one of those situations where you can’t be intimidated otherwise we wouldn’t have made it past the first audition. It’s all about being a professional and performing, although at the end of the day you might sit back and realize, “Wow, I just did a scene with Denzel Washington.” I’d be standing at the snack line saying, “Did I really just do that?” But, at the same time, when you step back onto the set, and hop back into character, you’re ready to shine a light onto a story that not many people have heard of. And so many little things are playing in your mind that you don’t even think about the fact that you’re doing so-called acting in front of Denzel and Forest.

KW: Did you have a sense, as you were making the movie, of the significance of the story, historically?

DW: No, I only really got a sense of its importance after the film. But I have to say that during the lynching scene you could feel the importance of the film, of what it meant to grow up during that era. And to feel what our ancestors felt.

JS: Yeah, once I saw the film, I was really blown away by how impactful it was even on me, and I’d been there for the entire process. But while you’re doing it, you’re so focused on being present that you have to forget all the external stuff in order to make it honest, to make it natural.

KW: Denzel, given your name, did you feel predestined to act as a child?

DW: No, not at all. Acting didn’t occur to me till about seven years ago. I knew who Denzel Washington was, but never did it occur to me that I had the same name as an Academy Award-winner. It didn’t drive me to acting, but it’s definitely a compliment when someone says something like, “Hey, you’re little Denzel.”

KW: What do you hope this picture will impress upon young kids?

JS: The film has so many messages. One is the power of the spoken word. We see it today in poets and hip-hop artists. The power of our tongues – The power of having an opinion and using your mind as a weapon versus using something like a gun or a knife – Using the tools that God has given you as your biggest strength. That was the ticket out. That was how we got to where we are now, because there were so many people who decided to pick up a book, and fed their minds with that kind of fuel.

KW: Next is what I call the Jimmy Bayan question. Where in L.A. do you live?

DW: I live in the South Bay area.

JS: And I live in the Valley.

KW: Is there a question that nobody ever asks you that you wish somebody would ask?

JS: [Hesitates] Ummmmm, see, I go back and forth between oatmeal and Wheatena.

DW: And I go back and forth between Cinnamon Toast Crunch and Fruit Loops [Laughs]

KW: I like natural oatmeal, the grain that you actually cook.

JS: Yeah, definitely! Old-fashioned, not that quick stuff either. Kam, what do you put in your oatmeal?

KW: Soy milk, honey, cinnamon, nutmeg, a dash of vanilla and a dollop of butter.

JS: Ooh, you do it up! I put cinnamon, bananas, raisins and coconut oil.

KW: Wow! That sounds delicious! I’m going to try that.

JS: And I’ve also tried it with some walnuts.

KW: Denzel, how about you? Is there a question that nobody ever asks you that you wish somebody would ask?

KW: Why, is there a song he plays all the time? I heard that he likes Rapper’s Delight.

DW: Oh, that’s something from my past that my cast members don’t know anything about.

KW: Old school. I heard that you can rap the whole song.

DW: Not the whole thing, just the first segment of it. It was before the Kids’ Choice Awards, the first one I ever attended. I was on Nickelodeon’s All That at the time. They were like, “Okay, now we’re going to bring someone up from the audience to sing Rapper’s Delight. If you know this song, raise your hand.” Everything was new and exciting, and I started waving my hand, because and I’d heard it once or twice on my mom’s radio. Then all of a sudden they call on me and I’m just standing there with a dumb look on my face. So, I run up on stage and grab the microphone, and the next thing you know I’m rapping and shaking people’s hands in the slime pool pit. It was cool!

JS: You know what? I’m immensely happy. I walk in a space of gratitude. I’m so grateful to God for blessing me with an amazing family and the opportunity to do what I love. I love what I do, and I’m so proud of this film.

DW: I’m very happy. I’m proud to be doing the work that I’m doing. And I’m anxious and hopeful that my next body of work will be as significant as this film.

KW: Do you know what picture’s up next for you?

DW: No, sir. But having Denzel and Oprah put their hands on you, so to speak, is something special. After this, I’m just trying to see what scripts are out there. I’d really like to find more roles that are meaningful.

KW: Jurnee, you were Eve in Eve’s Bayou.

KW: So, you landed a title role pretty young.

KW: How does it feel to have been a part of such an important film at such a young age?

JS: Thank you. I’m really, really proud of Eve’s Bayou because we made it 11 years ago, and still people come up to me and tell me how much it touched them and how much they loved that film. It was also important to my development because I learned a lot on that set. I gained an immense amount of confidence from that film, and learned a lot about my craft. I’m very grateful to have been able to work with so many talented filmmakers and actors during my career. I’ve learned so much from them. It’s been my college, in a way.

KW: Eve’s Bayou was filmed at several locations around Louisiana’s Gulf Region. Do you have anything to say about the handling of Hurricane Katrina?

JS: Oh God! You can’t shut me up about it. My mom is from New Orleans. And all of my maternal relatives were there during Katrina. We couldn’t even find my uncle for four months. We literally didn’t know where he was. I had been there just four days before the storm hit.

KW: Have you been back?-

JS: Yes, the first time I went back was two months after. I went with the Children’s Defense Fund. We went all around – to the Lower Ninth Ward – and to some of the freedom schools that the Children’s Defense Fund is building. While there are a lot of people down there who are working hard, we’re not giving them enough help. I can’t tell you how many people I know whose lives have been turned upside-down. All of my maternal relatives have left, with the exception of my uncle. Everyone else is either in Houston or Dallas or Atlanta. They’ve been able to rebuild their lives, but not everyone is as fortunate. I could tell you stories about children who were supposed to be on medication whose mothers couldn’t get their prescriptions filled for months, because of all the red tape they had to go through. I was like, “This is America? They did nothing wrong to deserve this.” This was a national disaster, and yet so many children had to pay such a heavy price.

KW: Despite being young, you are very active with many charities and social causes. I know you were over in Africa working with AIDS patients, too.

JS: Yeah, I was fortunate enough to go to South Africa with Artists for a New South Africa. That trip changed my life, man. The stuff you see – and the stories you hear firsthand – I mean, that country has such beauty, and yet such pain. The spirit of the people is amazing, but there’s still a lot of work that’s just got to be done. It’s so easy to take the things we have for granted. Little things like electricity, running water and a roof over our heads. They have to work so hard to get things we feel entitled to. There’s hunger for an education over there. Being there made me realize what’s important in life, and made me reevaluate a lot of things in my own life.

KW: Well, thank you both for the interview. I’m expecting even bigger things from both of you down the line and hope to speak to you again when you’re working on new projects.