Patrick Warburton (born November 14, 1964 in Paterson, New Jersey) is an American actor from Huntington Beach, California. He is best known as David Puddy on Seinfeld.

He also is the voice of “Kronk” on The Emperor’s New Groove (who happens to be able to speak and understand squirrel language), the title role in The Tick live-action series, the evil Johnny Johnson on the final season of NewsRadio, bodyguard Brock Samson on The Venture Bros., and the voice of the wheelchair-bound neighbor of the Griffins, Joe Swanson, on Family Guy.

Warburton was born in Paterson, New Jersey, the oldest of four children. His family moved to southern California when his father relocated his orthopedic practice to Huntington Beach, California.

After graduating from high school, he studied marine biology at Orange Coast College in Costa Mesa, California, but dropped out to pursue modeling and acting.

In the mid to late 1990s, he was best known for his role as David Puddy on Seinfeld, the indifferent boyfriend to Elaine Benes. He also starred in FOX’s short-lived live-action series The Tick, in the title role. 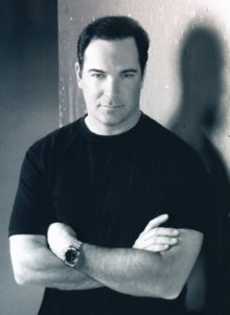 In the mid to late 1990s, he was best known for his role as David Puddy on Seinfeld, the indifferent boyfriend to Elaine Benes. He also starred in FOX’s short-lived live-action series The Tick, in the title role.

He appeared in the Australian film The Dish as a NASA official and on NewsRadio as Jimmy James’s nemesis, Johnny Johnson. He had a role on the mid-1990s CBS sitcom Dave’s World.

The 6’3″ Warburton is a handsome, muscular man; his roles (both vocal and visual) often have him parodying the stereotypical gung-ho, square-jawed, all-American who is usually a little short on brains, but overflowing with enthusiasm. His roles often satirize his own body-builder looks and “official”-sounding voice.

He appeared as Officer Walter Kramitz in the 2002 movie Big Trouble and in the critically acclaimed art house film, The Civilization of Maxwell Bright.

Warburton has put his booming, authoritative voice to use for several animated films and TV programs, including a lead character in Game Over, and Buzz Lightyear in Buzz Lightyear of Star Command. He plays Nick Sharp in 8 Simple Rules, and he plays Mr. Barkin in the Disney Channel show Kim Possible (though he found his dialogue disappointing[citation needed]). He joined the cast of Less Than Perfect in 2003.

He returned to the role of Kronk for Kronk’s New Groove (the sequel to the 2000 film, The Emperor’s New Groove) and the subsequent TV series The Emperor’s New School. His next major project was on the animated series The Venture Bros., under Cartoon Network’s Adult Swim programming block; in it he voices Brock Samson, the Venture family’s brutally effective bodyguard and former secret agent.

Warburton lent his voice talent to 2005’s computer-animated feature film Hoodwinked – a comical take on the Little Red Riding Hood folktale. He played “the Wolf.” He had a small role as the voice of the alien cop in 2005’s Chicken Little. He is the voice of” Mr. X” in The X’s, and the voice of “Ian the Buck” in the film Open Season.

Warburton is featured in the “preboarding” film shown to guests at Soarin’ Over California (located in Disney’s California Adventure Park). This same film is shown at Soarin’, located in Epcot at the Walt Disney World Resort. Warburton delivers all of the instructions in his typical deadpan style.

Warburton appeared on GSN’s Poker Royale Celebrities vs. the Pros tournament in 2005. He made it to the Grand Finale and won the $50,000 grand prize.

He has been married to Cathy Warburton since 1991; they have four children.