The June 2007 issue of Downbeat Magazine cited Palmer as one of the “Top 25 trumpeters of the Future.” His debut recording, “Songbook,” with Ravi Coltrane and Greg Osby, was released to rave reviews in 2008. And his second CD, “Nothing to Hide,” just dropped in September of this year. 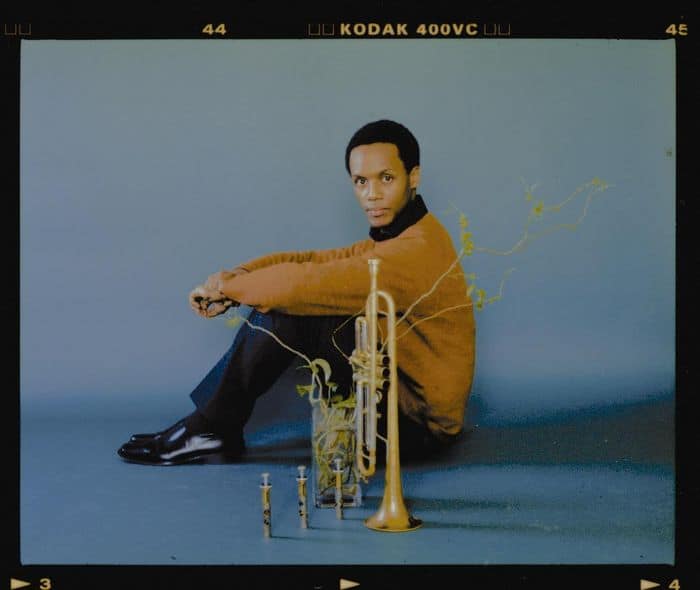 Jason’s group has been playing Wally’s Jazz Cafe in Boston every weekend for the past decade. The quintet has also been featured at the Tanglewood Jazz Fest, the Stone and the Jazz Gallery in NYC, the Studio in Hartford, Connecticut, as well as numerous venues across New England. In 2007, he was commissioned by the Festival of New Trumpet Music in NYC to premier a new composition based on Sudoku at the Jazz Standard.

Besides performing, Palmer maintains a busy schedule as an educator/actor/board member at JazzBoston. Plus, he was recently hired by Berklee College of Music as an Assistant Professor of Ensembles. Here, he talks about playing a title role in Guy and Madeline on a Park Bench, a jazz-driven romance drama marking the impressive directorial debut of Damien Chazelle.

Jason Palmer: My pleasure, Kam, and thank you for your interest.

KW: What interested you in Guy and Madeline on a Park Bench?

JP: A little over three years ago, Damien visited Wally’s, the jazz club that I perform weekly at in Boston, in search of a lead for his film. He asked me if I was interested and I thought the project sounded really interesting. I was excited about the idea of being a part of a film that featured the musical genre at I love. I must say that in most cases when I’m approached at Wally’s by an individual that’s interested in collaborating, they’re usually not too serious about it, so I don’t expect any follow ups on their end. But this wasn’t the case with Damien. From the start I got the sense that he was motivated and on top of things. That piqued my interest as well.

KW: You’re a jazz trumpeter. How much acting experience did you have prior to shooting this film?

JP: I had no experience acting at all. Still, there are some aspects of performing jazz that are similar to acting. What I mean by this is that when I’m performing I believe that I am obliged to leave all my troubles aside.

KW: Which do you find more challenging, acting or play music?

JP: I think that they both have their challenges. I wouldn’t rank one harder than the other. I think that we are in a day and age now when musical performances on stages are apt to end up on Youtube or any other social media. Musicians are highly conscious of this. For a period in my life, I felt a pressure to perform beyond my expectations because if I didn’t, that particular performance might end up online for all to see and judge. So that pressure was there. With acting, it was so new to me I didn’t really feel the pressure in the beginning. That was also due to the fact that in acting for this film, I had the option of doing another take.

KW: Were you surprised by how well-received the film has been?

JP: I was surprised because I knew that the film started off as Damien’s thesis project at Harvard. I wasn’t aware that the film was going to be submitted to film festivals. Due to my performing and teaching schedule, I also didn’t get a chance to see the film in it’s entirety until after I had learned of some accolades that the film had garnered.

KW: I noticed that you both d gigs with your quintet and teach trumpet at a couple of conservatories? How hard is it to juggle those careers?

JP: It’s a challenge but it’s not anything that I can’t handle. I think that communication is key when juggling these two things. When I’m out on the road, I schedule make up lessons ahead of time so flexibility on both ends is key to managing a career in music.

KW: Who are your favorite trumpeters?

JP: How much print space do I have [LL] I’ll just say that I embrace every trumpeter in jazz from Louis Armstrong to Don Cherry. All musicians who play with heart and display integrity hold a special place in my heart.

KW: How would you describe your sound?

JP: I think it’s a combination of all the trumpeters and musicians that I’ve been influenced by over the past fifteen years. I believe that in today’s musical climate musicians have to play many styles convincingly and sometimes alter their sound to stay true to the style that’s being played. This is what I try to convey whenever I take the stage.

JP: I’ve been asked so many questions, I can’t really think of anything at the moment. I’m pretty much an open book.

JP: Sure, that’s an emotion that I’m not immune to. I’m not a swimmer yet, so you can imagine how I must feel about large bodies of water.

JP: I’m happy today, I was happy yesterday and the day before, and I hope to keep that streak going!

JP: Right now, I’m on a “This American Life” kick. There are some really funny stories on that NPR radio show that have had me rolling lately.

JP: The use of patience and action coupled with the belief that everything happens for a reason that we are meant to learn from gets me through.

KW: The Nancy Lovell Question: Why do you love doing what you do?

JP: I love seeing the smiles on people’s faces and sensing the joy from them after a show. I believe that’s what I’ve been put on this earth to do. I also love helping student musicians realize their potential and self-worth when I’m working with them.

JP: Music, the Brain, and Ecstasy by Robert Jourdain.

JP: On my iRiver, I currently have the music of Kurt Rosenwinkel as well as Janelle Monae’s Archandroid in heavy rotation. I hope she wins a Grammy.

JP: I have a variation on a Costa Rican dish that I make maybe once a week. It consists of grilled swordfish, tomatoes, onions, zucchini, garlic, spinach, oregano, basil, salt, a little cayenne, thyme and rosemary, all on a bed of quinoa infused with lemon juice. I also started making lamb saagwala. That’s a challenge, but it’s fun!

JP: I haven’t really gotten into that yet. I shop at Marshall’s, Banana Republic, and online at J. Crew occasionally. I also like places like Brooks Brothers, but I’m pretty thrifty, so I may splurge there only once a year or so.

JP: An end to global poverty and inequality.

JP: Sticking a key into a socket and getting electrocuted.

JP: Stay persistent and don’t be afraid to be told “no.” All it takes is one “yes” to get things rolling for you. My career has been on a slow steady incline for some time now and I have to take it in stride.

KW: The Tavis Smiley question: What do you want your legacy to be?

JP: I do my best to pattern my life after greats such as Clifford Brown and Dizzy Gillespie. I want to be known as a person who made an important contribution to this music that we call jazz. I would like for my teaching methods to live on after I’m gone. That’s why I’m writing a book right now.

KW: Thanks again for the interview, Jason, and best of luck with all your endeavors.

JP: Thank you, Kam, and the same to you.