Haley Joel Osment skyrocketed to fame at the age of 11 with his unforgettable, Academy Award-nominated performance in M. Night Shyamalan’s ghost thriller, The Sixth Sense. His portrayal of Cole, the little boy who uttered the iconic line, “I see dead people,” left an indelible impact on audiences, and the picture grossed over $672 million worldwide.

In 2000, Osment went on to co-star alongside Kevin Spacey and Helen Hunt in the Warner Brothers drama Pay It Forward. And a year later, he starred opposite Jude Law in Steven Spielberg’s 2001 sci-fi drama, A.I. which earned over $235 million worldwide.

Here, he talks about his life and career, and about his upcoming movie, a comedy called Sex Ed. 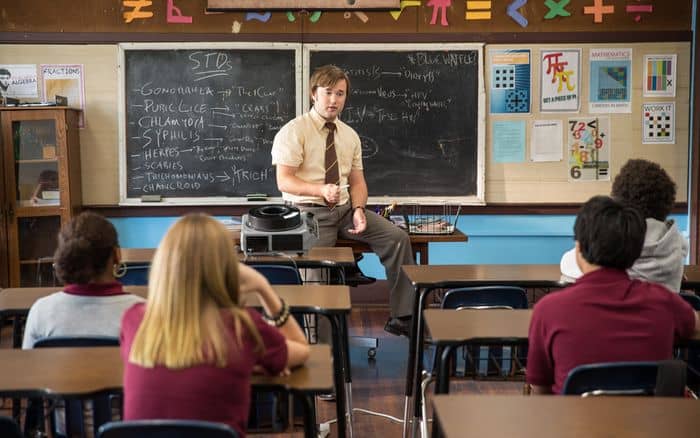 KW: Great! I really enjoyed Sex Ed. Before we start, I just wanted to say that I think you and my son have some mutual friends. He’s your age and went to Princeton. He said you were on a campus a lot when he was there.

HJO: Yeah, one of my closest friends went to Princeton, so I would come out to visit him occasionally, which was kinda nice because it was such a short train ride away from New York City. It was always great to get out to a non-urban environment.

KW: I’ll be mixing my own questions in with some from readers. Harriet Pakula-Teweles asks: How did attending the Tisch School at NYU help you prepare for your adult career in film and theater? Is going to college something you would recommend to other child stars?

HJO: I think college is a good idea for most everybody, but it depends on the person and on what you want to be doing when you turn 18, whether you want to go away to school or if acting’s something you want to jump on immediately.

KW: Harriet also asks: With so many classic films being redone, is there a remake you’d like to star in?

HJO: No, I would like to see more original films than remakes at this time. [Laughs]

HJO: It’s a film that [director] Isaac [Feder] and [screenwriter] Bill [Kennedy] have been trying to make since about 2007. I loved the script when I first read it in 2010, a funny fish-out-of-water comedy. Over the next four years we had a couple of near misses trying to get it made. Then, out of the blue, we got some money to shoot the movie in Florida, which turned out to be a blessing in disguise, since the location added a lot of flavor to the film.

KW: Irene also asks: What do you want people to get from your performance? Are you trying with this comedic turn here to get out from under the shadow of your iconic performance in The Sixth Sense?

HJO: I’m always just interested in whatever the best scripts are. This was just a bit of fortunate, coincidental timing. I really enjoy doing comedies, although I didn’t get to do a lot of them as a kid. I was on some network sitcoms. But it’s a really fertile time for comedy right now on a variety of platforms.

KW: Did you base your character, Ed Cole, on anybody?

HJO: Not on anyone in particular. He was originally based on a friend of Isaac and Bill’s who had been teaching English in Korea. But I never met that person, and wanted to create Ed from the ground up as his own man.

HJO: Well, we didn’t set out to make a polemic. Where we sort of land is a mixture of respect for those parents who know what they want their children’s sex education to be like, and the reality that the information should be available for other kids whose parents are unable to inform them about the subject.

KW: Aaron Moyne asks: At what age will you tell your kids about the proverbial birds and the bees?

HJO: Oh gosh, I don’t know. Kids are, at the very least, a long way off for me. I don’t know that there’s a set age. I guess it depends on the maturity level.

KW: Sangeetha Subramanian asks: How do you cope with those hard days on the set?

HJO: It can be grueling, particularly with an independent film like Sex Ed, when you have really long work days because you’re shooting the whole film in a short amount of time. It can get a bit tiring when you’re in virtually every shot of every scene. But having done some theater in New York, where you have to keep yourself fresh for eight performance a week, helps with endurance and keeping your energy up.

KW: Environmental activist Grace Sinden asks: Aside from your own work, what are you enjoying watching nowadays?

HJO: Well it’s a great time for television, along with Amazon Prime, HBO Go, and other ways we catch our shows. ! I’m a big fan of Veep, Game of Thrones, It’s Always Sunny in Philadelphia, and Breaking Bad, which ended last year. As far as movies, I’m excited about Inherent Vice which opens in December, and I’m also looking forward to seeing Birdman which is supposed to be pretty cool.

KW: Grace was also wondering whether there are any particular actors or directors you have not worked with yet but would like to?

HJO: Certainly, Paul Thomas Anderson, in terms of directors. I’m a big fan of all his films. When it comes to actors, it’s hard to pick just one.

KW: Finally, Grace says: Early acting success often leads to a distorted perception of what a good life is. Do you feel you learned any important life lessons in this regard from your own early success in movies and television?

HJO: I think one thing that was really important, particularly in this industry which is so unpredictable and changing in profound ways, and I guess is contracting on the film side, was never to expect that it would always be a boom time. I was really lucky to be in such high-profile movies early in my career. But part of the reason for going to college was to make sure that my motivation for being in the industry was to do quality work, and not to be counting on giant blockbusters. In that regard, I am prepared for whatever the future holds.

KW: What was it like to be nominated for an Oscar at 11 years of age?

HJO: The Academy Awards season was crazy! But what was kinda nice and reassuring was how Steven Spielberg warned me about two months before Oscar night that the best part of the experience would be how all these famous people would be nervously running around trying to meet each other during commercial breaks in the telecast. He was absolutely right about that. It was cool to see that everybody else was also in this excited place.

KW: Have you ever had a near-death experience?

HJO: No, and I hope that good fortune continues.

HJO: No, Kam, I’ve been doing press for so long that I’ve heard it all.

KW: Would you mind saying something controversial that would get this interview tweeted?

HJO: [LOL] No, and I’ve been pleasantly surprised that the subject-matter of Sex Ed hasn’t ruffled any feathers so far.

And I just finished “The Hot Zone: The Terrifying True Story of the Origins of the Ebola Virus” by Richard Preston. Getting more information about Ebola did sort of help quell my panic.

KW: I know Richard. He lives nearby. And just an hour ago, I was on the phone with Rachel, a friend who owns the carriage house where he wrote “The House Zone.”

HJO: Oh, that’s right! He’s a Princeton guy. Well, it’s an interesting book to read now. All the science behind it is fascinating, from the standpoint of doctors who had no idea what it was they were dealing with during the initial outbreak.

HJO: That’s a tough one. One of my closest friends has a big backyard in Brooklyn. We like to grill brisket for hours and hours on Sundays for the football games. I’ve also been trying to perfect a really simple marinara sauce with good quality tomatoes you can find in the city.

HJO: I don’t knowA… I can’t think of a creative response to that one. [Chuckles]

HJO: To put an end to the Ebola outbreak.

HJO: My mom playing kids’ books on tapes for me as I was falling asleep in the crib.

HJO: Part of the reason I enjoy doing press is because I don’t have to modulate my personality too much. I think I just speak louder on carpet, which is important when you’re doing interviews. [Laughs]

KW: The Judyth Piazza question: Is there a key quality you believe all successful people share?

HJO: I think curiosity and open-mindedness are important in our business. But success is a hard thing to predict or pin down.

HJO: I’d say, just make sure that the work is your primary interest. It’s a really tough industry. I know a lot of really talented, good people who don’t succeed. So, I’d say find a way to do your craft in a way which satisfies you, and let the rest of the stuff, the success and recognition, come as a bonus.

HJO: For a wide variety of roles over a great many years.

KW: And finally, what’s in YOUR wallet?

KW: Thanks again for the time, Haley, and best of luck with Sex Ed.

HJO: Thanks a lot, Kam. It was nice talking to you.