Born in Toronto on June 9, 1964, Gloria Reuben is the second youngest of a half-dozen children born to her Jamaican, gospel singing mother and her architect father. The pretty prodigy was taught piano at an early age, and would grow up to study theory, technique, ballet and jazz at the Canadian Royal Conservatory.

At 18, she won the Miss Black Ontario beauty pageant, although the crown did not come without controversy, as some people questioned whether she was deserving because one of her parents was white. However, Gloria would be vindicated a decade later when People Magazine named her one of the 50 Most Beautiful People in the world. 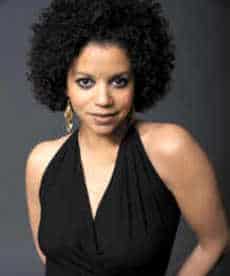 Following the pageant, Ms. Reuben began an impressive career in film, on television, in theater and even on tour as a back-up singer to Tina Turner. She is probably best known from her work on the NBC nighttime drama ER where she played Jeanie Boulet, an HIV+ physician’s assistant.

She has also appeared on such shows as Law and Order, Numb3rs, The Agency, The District and Homicide, and in movies like The Sentinel, Shaft and Timecop. Here, she talks about her new series, Raising the Bar, which is set to premiere September 1st on TNT, and will air on Mondays at 10 PM EST (check local listings). Her character on the weekly legal drama is attorney Roz Whitman, the head of the New York City Public Defender’s Office. 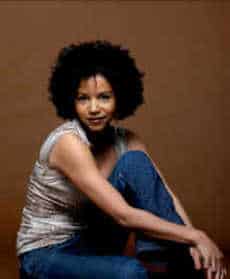 KW: Hi, Gloria, I’m honored to be speaking you. What interested you in Raising the Bar?

GR: Three things. First and foremost, [7-time Emmy-winning writer] Stephen Bochko. Secondly, the book that the show was based on, called Indefensible, written by David Feige, who’s one of the writers on the show. He had been a public defender in the Bronx. And thirdly, that the story is structured in such a way as to show three different aspects of the judicial system: the viewpoints of the public defenders, of the district attorneys, and of the judges. I like how, more often than not, these three groups have different perspectives and go after things pertaining to the same human being from different angles. And I also appreciate how it sheds light on the inner workings of the criminal justice system and the corruption that sometimes goes on behind closed doors.

KW: Did you ever have an interest in becoming a lawyer?

GR: I live in New York, and so does David Feige, and the director, Jesse Bochco. A couple of the other cast members came out from L.A. for a research trip. We all actually spent some time up in the Bronx and down at the Centre Street Courthouse in lower Manhattan to observe exactly what happens, not only in the courtroom but during the whole process from someone getting booked, on. My character, Roz, is based on a woman named Robin [Steinberg] who runs the Bronx Public Defender’s Office. So, I spent some time with her. Of course, you want to get down the fundamentals of how she works, and what her work entails, but to me, it’s all about what’s going on emotionally.

KW: Why do you choose to live in New York instead of Hollywood?

GR: Because I lived in Hollywood for 11 years and had my fill. I’m from Toronto, so prefer the East Coast and I missed the change of seasons. I may sound crazy, but I love winter.

KW: I watched the premiere and saw that a lawyer named Richard [played by Teddy Sears] was flirting with you. Is a romantic relationship in the works for your characters?

GR: Well, if I told you the answer and spoiled it, then nobody would watch. When it comes to relationships on television shows, personally, I feel that sometimes things are defined too quickly. Then, where do you go? Nothing is really set in stone in terms of Roz’s personal life, which I like.

KW: When you have an ensemble cast and an open plotline with plenty of possibilities, do you find yourself lobbying for more screen time or certain developments?

GR: I think it’s wise to wait to see how things play out, especially when it’s a show’s first season and it hasn’t even been on the air yet. It’s kind of like shooting in a vacuum. Hopefully, there will be a next season, and we’ll get to develop storylines further or venture off into other arenas. Besides, I’m really not one to lobby, unless I feel that it’s something that very critical for my character. Plus, I have so many other things going on outside the show that I’m grateful for any free time. I wasn’t even there the last nine weekends that they were shooting in Los Angeles. I was always on a plane going somewhere.

KW: I saw that you’re going to Cape Town, South Africa to do a play about human rights, and to do some organizing around the issue of pediatric AIDS in Johannesburg. You’re known for your very extensive philanthropic work. What are some of the other causes you’ve been busy with lately?

GR: If you go to my website, www.GloriaReuben.com, it gives a synopsis of the myriad of charities I’m involved with.

KW: What came first for you, AIDS activism or playing a person who’s HIV+ on E.R.?

GR: Playing Jeanie Boulet definitely came first. And by the time I left the show, I thought my work had been done in a way. But when I recently read that AIDS was the #1 killer of black women between the ages of 25 and 34 here in the United States, I asked, “What the hell is going on?” That kind of spring-boarded me to take action again to raise awareness in our communities all around the country.

KW: Is it true that you left E.R. because you were burn out emotionally by the role?

GR: Yes, absolutely. If you look back, you’ll see that she really didn’t have a lot of fun. Because of the success of the show, which was great, it wasn’t the kind of part that you could leave behind at the end of the day. It was there all the time, which was a lot.

KW: You left the series to sing backup for Tina Turner. How was that?

KW: What was the controversy surrounding your being crowned Miss Black Ontario?

GR: Gee, that was so long ago. It’s funny that you asked that. Actually, the timing is kind of perfect, because there was this thing about Obama, “Is he black enough?” That’s all I need to say about that issue.

KW: Did you feel vindicated when you were later named one of 50 Most Beautiful People in the world by People Magazine?

GR: [LOL] That’s so funny. No, I didn’t feel vindicated at all. [Laughs some more] That, too, was a long time ago. I don’t know if they would have me in it now.

KW: I don’t see why not. Time hasn’t diminished your beauty. How did you feel when you were named?

GR: Let’s put it this way, it was certainly a nice compliment.

GR: The last book I read was called On Writing by Stephen King.

KW: Tasha Smith asks: Are you ever afraid?

GR: [Pauses] 100% of the time? No. I think I would have to be on some kind of drugs to be happy all the time. But I’m very content and filled with gratitude for the most part. Yes.

KW: The Heather Covington question: What music are you listening to nowadays?

KW: is there any question that nobody’s ever asked you, that you wish someone would?

GR: [Pauses] That’s a good question. I don’t know how to answer that. [Pauses] The only thing that pops into my mind is: How can I persuade my friends to get tested for HIV?

KW: Okay, how can I persuade my friends to get tested for HIV?

GR: Go with them, and get tested at the same time. It only takes 20 minutes.

GR: Just as someone who maybe made a difference in at least one person’s life?

KW: Thanks for the time Gloria, and best of luck in all your endeavors.

GR: Thanks, and the same to you.

To see a trailer for Raising the Bar,