Donald Cheadle might be the best actor around yet to win an Oscar. His only Academy Award nomination came in 2005 for his powerful performance as Paul Rusesbagina in Hotel Rwanda. But he’s been delivering an abundance of critically-acclaimed work both before and since in such films as Devil in a Blue Dress, Boogie Nights, Rosewood, Ocean’s Eleven, Crash, Traffic, Swordfish, Talk to Me, Mission to Mars, Traitor, Rush Hour 2, Bulworth and Reign over Me. 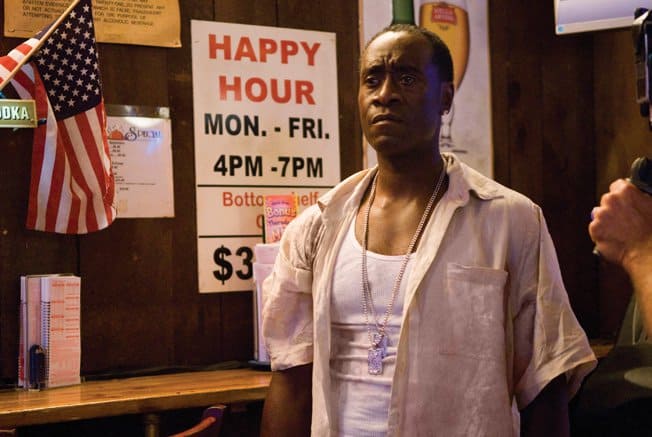 KW: Children’s book author Irene Smalls asks, how did you prepare for this role as an undercover detective?

DC:I spent some time with several police officers who are actually doing the same type of work in Brooklyn.

KW: Citing the maxim “Great actors do not act, they show their true selves to the camera,” Irene asks whether there are any parts of your psyche you have not yet explored on camera?

DC: After making 40-something films, if there’s anything I haven’t revealed yet, it’s probably best kept under wraps.

KW: Laz Lyles was wondering whether the energy on the set of Brooklyn’s Finest was similar to working with the large ensemble of talented actors in Ocean’s Eleven?

DC:No, this was a very different experience.

KW: Attorney Bernadette Beekman says she appreciates all your humanitarian efforts as much as she does your acting. And she suspects that your choice of charities has been influenced by the locations where you’ve shot movies, given all you’ve done for Darfur and Rwanda. So, she was hoping you might interested in supporting her charity in East New York, Brooklyn which is dedicated to early educational opportunities for young African-American males under the age of 5.

DC:There are only 24 hours in the day, but I’d love to get involved, my schedule permitting.

KW: Nick Antoine wants to know if there’s any truth to the rumor that you’re planning to do a Miles Davis bio-pic.

DC:Yep, I’m working on it now.

KW: Is it true that you’ve done standup comedy?

KW: Is it true that you play the saxophone?

KW: I know who you’re favorite trumpeter is. How about saxophonist?

KW: The Zane question: Do you have any regrets?

KW: “Realtor to the Stars” Jimmy Bayan’s question: Where in L.A. do you live?

DC:Whatever my kids want to eat.

KW: What are you’re favorite foods to eat?

KW: The Mike Pittman question: Who was your best friend as a child?

DC:My siblings and my cousins.

KW: The Uduak Oduak question: Who is your favorite clothes designer?

DC:That the world would take the issue of global warming seriously.

KW: Thanks again for the interview, Don, and best of luck with the film.

To see a trailer for Brooklyn’s Finest,