Denzel Washington is a man constantly on the move. Never content to just repeat his successes, the two-time Academy Award-winner (for Glory and Training Day) is always searching for new challenges through his numerous and varied film and stage portrayals.

From Trip, the embittered runaway slave in Glory to South African freedom fighter Steven Biko in Cry Freedom; from Shakespeare’s tragic historical figure Richard III to the rogue detective Alonzo in Training Day; to his recent critically-acclaimed performance as the addicted airline pilot Whip Whitaker in Flight, Denzel has amazed and entertained audiences with a rich array of characters distinctly his own. 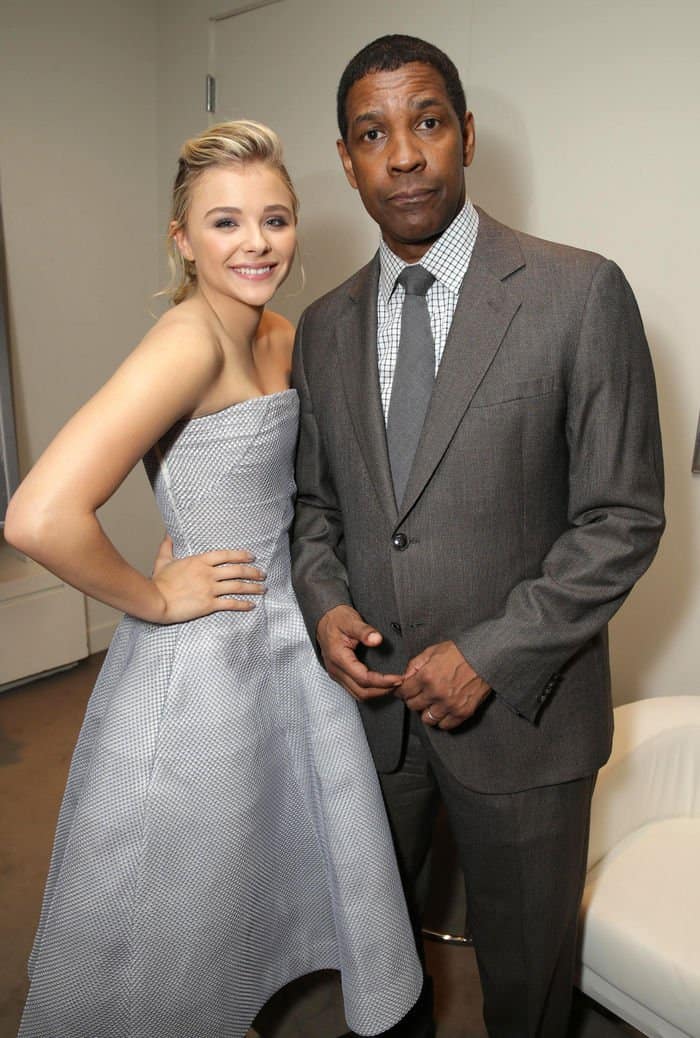 The talented thespian has also starred in 2 Guns, Safe House, Unstoppable, The Book Of Eli, The Taking of Pelham 1 2 3, American Gangster, Inside Man, Dejavu, Man on Fire, The Manchurian Candidate and Out Of Time, to name a few. And his next film as director was The Great Debaters, where he co-starred opposite Forest Whitaker.

Here, Denzel and director Antoine Fuqua discuss their reuniting to collaborate again on The Equalizer. 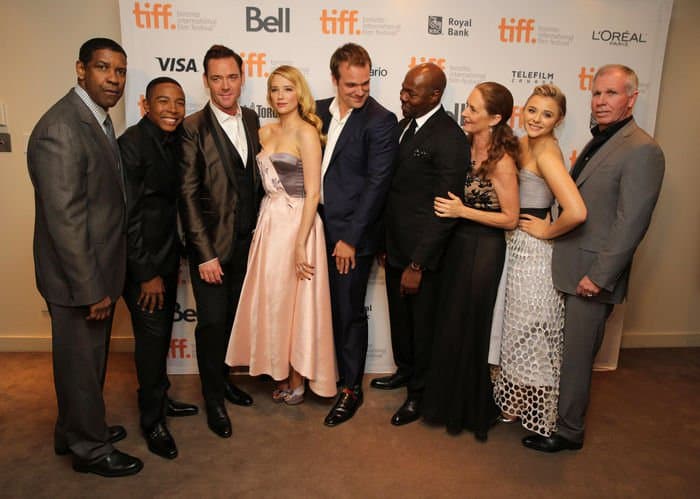 KW: I want you to know that I loved this film and also your previous one, Antoine, Olympus Has Fallen. Thanks for using my quote on the DVD. I hope I get blurbed for this one, too.

KW: I have more questions for you two from readers than you could ever answer, but I hope we can get through a lot of them. 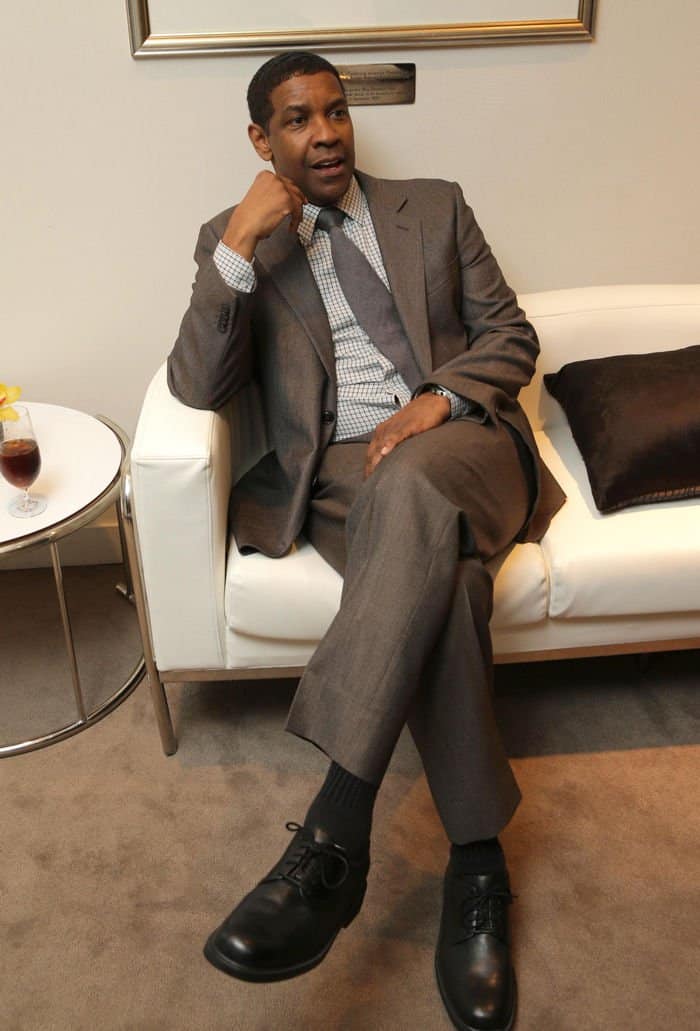 KW: Film Student Jamaal Green doesn’t have a question, but says: You are both an inspiration to me and many of my peers who are pursuing a career in filmmaking. Thank you for your dedication to your craft.

KW: Children’s book author Irene Smalls says to Antoine: Thank you for giving us a Black hero. Do you see the Equalizer as blossoming into a franchise?

AF: I hope so, but that’d be up to the audience.

KW: Larry Greenberg says: Antoine, I have only seen the trailer for The Equalizer, but I was blown away by the cinematography. How were you able to achieve that look?

AF: With the help of a great cinematographer, Mauro Fiore [Oscar-winner for Avatar].

KW: Pittsburgh publisher Robin Beckham asks As an Academy Award-winning actor, what is it like to work again with one of the few African-American directors, Pittsburgh born, Training Day director Antoine Fuqua? Is there some special brother chemistry in action while working together?

DW: [LOL, speaks while Antoine also laughs heartily] Yes, we have the brother meeting every weekend, at the Brotherhood of Black Directors and Black Actors’s meeting. No, Antoine is obviously very talented, and we’ve had some success in the past, and I also look forward to our next opportunity.

KW: Director Rel Dowdell says: Denzel, you have set the standard of excellence for African-American actors for so long. Is there any type of film that you haven’t had the chance to act in yet that you would like to?

DW: No. [Laughs again, then pauses to think] I don’t know… There’s no wish list, but thanks for asking, Rel.

KW: Editor Lisa Loving asks Denzel: Have you ever taken on a role that, when you were in the middle of it, made you think “C wait, this is impossible?

DW: What does Lisa mean by impossible? Impossible to do or to be or in some other way?

KW: I have no idea. I’m just reading what was sent in.

KW: Lisa also says: Antoine, based on your childhood, would your mom have been surprised to know all that you were going to accomplish in your professional career?

AF: Absolutely! Absolutely! I played sports. She would never think I was going to be a director. That wasn’t part of our daily conversations.

KW: Hirangi Patel asks Denzel: What can you reveal about your character Robert McCall’s mysterious back story?

DW: It wouldn’t be mysterious anymore, if I revealed it. [Antoine chuckles in background] You have to go to the movie and see.

KW: Dr. Joy Ohayia would like to ask Denzel: What is your secret to staying in fantastic shape for your action movies?

DW: There’s no easy way. Going to the gym, and a good diet and exercise. Well, I guess there are some magic pills available these days, but I don’t take any of them. I may start, though. [Laughs]

KW: Harriet Pakula-Teweles: What message about this action hero do you hope viewers take away from the film?

DW: Maybe Antoine will answer that question, but I never do because it all depends upon what each viewer brings to the film. The idea is just to have a good time. It’s not a big deal. Is there a message, Antoine?

KW: David Roth asks Antoine about The Equalizer: Why would a black man attempting to disappear choose to live in a predominantly white community?

AF: [While Denzel bellows in the background] who says it’s a white community?

KW: Aaron Moyne: If you had the power to equalize social injustices in real-life, what would be the first one you’d tackle?

DW: You got that one, Antoine?

AF: That’s a tough one. There’s a lot of things that need equalizing.

DW: Yeah. Just getting along, Aaron, and having respect for your fellow man.

KW: Kate Newell asks: Denzel, would you ever consider a career in politics?

KW: Claudia Thorne asks Denzel: I would love it if you were the commencement speaker at my graduation from Howard University next year.

KW: Editor/Legist Patricia Turnier asks: What advice do you have for aspiring minority actors and directors, and did either of you have a protege?

DW: Don;t look at yourself as a minority.

KW: Tony Noel asks Denzel: How have you managed to avoid having your life splashed across the tabloids?

DW: You can’t, unless you stay in the house. [Belly laughter from both]

KW: Tony asks Denzel: Is there an outcome or theme of a movie of yours that you would change if you could?

DW: I don’t know. We actually changed the ending in Training Day. In the original one, he lived. He walked away into an airport or something.

KW: Steve Kramer says: I played the piano for “The All Nite Strut” and worked with your then girlfriend!-

DW: [Denzel cuts me off] Get outta here! Pauletta?

KW: Yes, with Pauletta in Boston and Toronto. I was a skinny white guy with a big Jew-fro back then.

KW: Steve was wondering whether you remember walking the streets of Boston with him right before the release of your first movie, Carbon Copy, when he told you there was no greater woman than Pauletta?

DW: Well, I’m glad I listened to him. [Chuckles]

KW: Denzel, city bus driver Kevin Kenna would like to know whether you have any fond memories of Philadelphia?

DW: Yeah, my son went to the University of Pennsylvania, so I have a lot of great memories from visiting him and working there.- Cheese steaks and going to the Palestra to watch basketball games.

KW: Richie von der Schmidt asks Denzel about Philadelphia: Do you agree that bologna sandwich is a satisfactory meal, whereas caviar and champagne, roast duck and baked Alaska, that might be considered a delightful meal, which is a line of your characters from the film Philadelphia.

KW: Documentary filmmaker Kevin Williams is curious about how working on A Soldier’s Story and For Queen and Country improved your craft as an actor? You were so great in those early films.

DW: Well, A Soldier’s Story was a Pulitzer Prize-winning play first. I was one of the original cast members with Sam Jackson, among others in the play. We had great success off-Broadway even before we did the movie. It was a tremendous experience.

KW: Attorney Bernadette Beekman asks Denzel: Will you ever retire from acting?

DW: We’ll all retire from life at some point, but no. The great thing about acting is you don’t necessarily have to retire. 80 seems to be around the age that people seem to ease out of it. Gene Hackman, Sidney Poitier. So, I have a whole another quarter to go.

KW: Sangeetha Subram asks: Denzel, how did you come to produce this film?

DW: It’s just a title. It really was a collaborative process. We all got involved as soon as we were given the script. I’m not a numbers cruncher. I just helped make sure we put the best film we could onscreen.

KW: Bernadette, Antoine, What was it like directing Denzel again?

DW: Oh, I’m going to walk away while you answer that one. [Laughs]

KW: Professor/Fillmaker/Author Hisani Dubose asks: How has the Hollywood studios becoming part of conglomerates affected your ability to work? Do you think it’s feasible for independent productions to go after theatrical release these days?

AF: It’s always been big business. It doesn’t affect it any more now than it did 30 or 40 years ago. You just have to do the work.

DW: The room behind me. [Laughs very heartily]

KW: Well, thanks again for the interview,

To see a trailer for The Equalizer: