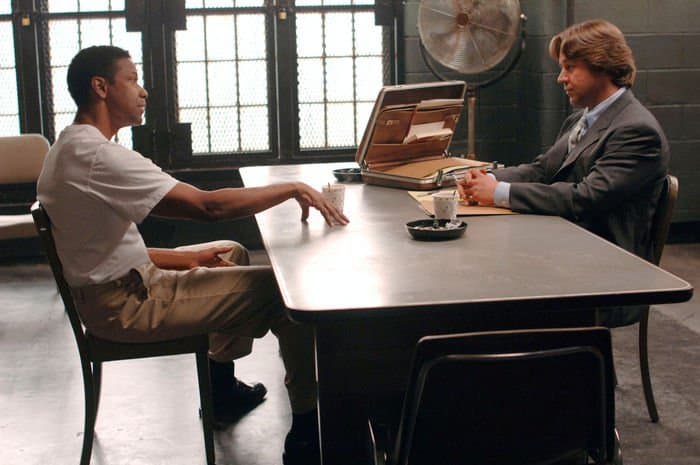 Oscar-Winners Opine on Their Second Collaboration

Academy Award-winners Denzel Washington (for Glory and Training Day) and Russell Crowe (for Gladiator) first acted opposite each other a dozen years ago in Virtuosity a sci-fi crime thriller set in virtual reality. In that picture, Denzel played a police lieutenant out to catch Russell’s character, a sadistic serial killer.

Now, the two have swapped sides of the law for American Gangster, with Crowe as the cop, and Washington as the crook. The film is based on the real life exploits of Frank Lucas, a Harlem heroin kingpin, and Richie Roberts, the cop who brought him to justice, as originally chronicled in a New York Magazine article by Mark Jacobson entitled “The Return of Superfly.”

KW: You both have come a long way since you first worked together.

RC: [Sarcastically] Virtuosity, yes, a wonderful movie. That was just a momentary lapse, wasn’t it? We were both young then, young and innocent. [Laughs]

DW: Not after that movie. We were old and tired. [Laughs]

KW: Can you talk a little about the theme of good versus evil as seen in the confrontation between your characters in American Gangster?

DW: [Laughs] Who was the good guy and who was the evil guy? A chord runs parallel in both. Jump in there, Russell. [Chuckles]

RC: That’s the delicate balance. I think that’s one of the fascinating things about the two characters, and about the story itself is that none of that’s clear. There’s not a clear, singular morality. When you get the opportunity to play that sort of character, which is nothing more than reality and humanity as it exists, it’s just a bit of fun. Richie’s an honest guy, but as his wife says in court, “You’re only honest in one area. You’re trying to buy yourself favors for all the other [expletive] that you do.” I think that just was an honest appraisal of who he was as a man at that time. But it also leaks into that area of discussing why people go bad in the first place or what the process of Frank Lucas was to become a drug dealer. If Frank Lucas had been befriended by somebody else, and educated in a different area, you might have a situation where there’s universities named after him now. He’s a very smart guy, and he used the things he learned to the best of his ability to change his life and the life of his family at that time. But it just happened to be that Bumpy Johnson was his teacher. So, he did his course work on the street and earned his Ph.D. in criminality under Bumpy Johnson.

DW: He was a man without a formal education, a man who at the age of six witnessed his cousin get murdered by sociopaths in uniforms. That shaped his life. From a very young age, he began to steal. He was on the wrong side of the tracks, but he was a brilliant student, and he became a master at the business that he was in. It’s a dirty business and he’s definitely a criminal who was responsible for the deaths of many people. I don’t just want to say he was a product of his environment, but as Russell said, had he gotten a formal education and had different influences, I think he still would have been a leader, but he’d have gone in a different direction.

DW: There’s a difference. This is one movie, not the only movie. In 2005, I did Julius Caesar. Not knocking rappers, but I can do both. So, whenever any rapper’s ready to do Shakespeare, I’ll be there.

RC: Wait, I think that what the question’s trying to get at is actually something pretty cool. He’s saying that when a guy sings a song about his life as a gangster on a record, people get down on him. But you and me, we make a movie about us in that same world, and we get praised for it from a creative point of view.

DW: Yeah, well some rappers who have made gangster albums have gotten praised for it, too. Some real good ones. America’s Most Wanted is still one of my favorite albums.

RC: Is it the criminality that people are getting upset with now about the music, where you’re literally singing the praises of gun worship, as opposed to a movie that plays out in front of you and a story that’s being told showing something that actually happened?

DW: And that these are the consequences.

RC: There’s definitely a difference there.

KW: Where does American Gangster fit in the pantheon of New York City mob sagas such as Naked City, The Godfather and Goodfellas?

DW: Well, I can say, for one, that among the movies you mentioned, there’s no black people in any of them. So, the situation may basically be the same, but this is a Harlem story. I guess it is to a degree a genre. There are certain things that are similar about those kinds of films, but this one in particular deals with a guy from uptown.

KW: Given all the accolades you’ve already received, what inspires you to continue making movies?

DW: Professionally, now, I’ve sort of segued, and I’m starting to head in another direction. I’m getting behind the camera. I’ve directed [The Great Debaters] for the second time now, and I’m sure that’s my new career. What we do is making a living. It’s not my life. My children and my family, that’s life. That’s the miracle of life. I get up every morning, God willing, for that.

RC: I’ve always found it to be a privilege to make movies. It’s a really expensive, creative medium. And people allow me to do it, and there are things that I can do as an actor that I couldn’t do in any other walk of life. And I’ve got a strange personality, but fortunately, film requires strange people. So, I’ve got a nice comfy home and this is what I do, and I’m really happy with that. When I know I’m getting up to work with Ridley [director Ridley Scott], I know all the time and effort that he would have put into whatever we’re about to shoot that day. To me, it’s all just a great privilege, and every day I look around and thank the Lord that it’s still going on.