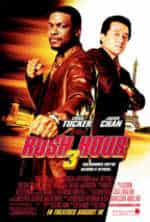 Born in Atlanta, Georgia on August 31, 1972, Chris Tucker has come a long way since his days doing stand-up on Def Comedy Jam. Starring in box office smashes that include the #1 grossing comedy Rush Hour 2, as well as Friday, Dead Presidents, Money Talks and the original Rush Hour (which grossed $250 million worldwide), he has clearly proven himself to be one of Hollywood’s hottest talents. Tucker entertains audiences the world over with his motor-mouthed brand of humor and animated facial expressions which always leave a lasting impression.

During his downtime, Chris traveled to Africa with U2’s Bono and Secretary of the Treasury Paul O’Neill on a fact-finding tour to help countries plagued with AIDS, hunger, and unsanitary living conditions. Deeply-affected by the conditions he discovered, Tucker has since returned to the region regularly on humanitarian missions, also functioning as a people’s diplomat, raising cash and awareness to help deal with the crises.

As a consequence, he’s been so busy he hasn’t made a movie in a half-dozen years. Here, he chats about Rush Hour 3, his first film since Rush Hour 2.

KW: Chris, thanks so much for the time.

KW: How did it feel being teamed up with Jackie Chan for a third time?

CT: Oh, I loved it, man! I loved it! It was just as much fun, or maybe even more fun as the first one and the second one, ’cause it’s such a fun movie to do and being teamed back up with Jackie was great.

CT: That was great, too, shooting in Europe, man. We did a lot of stuff outdoors… Riding around the streets and drinking wine for lunch… It was great!

KW: Seems like you and Jackie have perfect screen chemistry. You have very different types of talents which complement each other, so you never end up stepping on each other’s toes. Did you know that was going to happen the first time you go together?

CT: No, the first time we got together, it was just like you see in the first movie. Jackie didn’t speak much English, and I didn’t know Chinese at all. I brought that out in Rush Hour 1, like when I screamed, “Do you know the words that are coming out of my mouth?” That’s basically what I wanted to say to him the first time I met him. So, no, we didn’t know, but the chemistry was perfect. I think that was because it came from a real place. What you see on film is the same friendship and relationship between us you see in real life.

KW: So, was that “Do you know the words that are coming out of my mouth?” line improvised, or was it in the script?

KW: And how many of your lines were improvised in Rush Hour 3?

CT: Oh, a lot of them. A lot of them were written, but I’m always improvising. Once you get into the scene, it just comes to me.

KW: This is your first film in six years. You make fewer films than any other big Hollywood star. Why do you make so few movies?

CT: I don’t know. It’s never planned. I love to travel, and that takes up most of my time, because I’m doing a lot of foundation work. That’s a big part of my life now, and of what I do. But I love making movies, too, so I don’t know.

KW: I know that you’re getting a record $25 million for this picture, which sets the record for a comedy, plus an additional percentage of the gross. So, you’ve got great representation which I guess enables you take long breaks for vacations and your charity work.

CT: Yeah, that definitely does give me a lotta’ room, so I can travel and not have to worry about a lot of things.

KW: I saw that you were in Philly to introduce Destiny’s Child at the Live 8 concert.

CT: Yeah, that cause had to do with raising awareness abut poverty in Africa and elsewhere. I enjoy doing stuff like that, because it means a lot to me.

KW: Are most of your charities connected to Africa?

CT: Most of them are, but now I’m trying to get involved with education in the States and around the world.

KW: Had you been to Africa even before you visited it while tracing your roots during the filming of African-American Lives on PBS?

CT: Yeah, I had been to at least 13 different countries in Africa before that.

KW: Which places in Africa did you enjoy visiting the most?

CT: Every one is different. One of my favorite’s Ethiopia… and also Uganda… and Luanda, the capital of Angola. But every place is so different, really. You’ve got a lot of special parts to all of them.

KW: I remember how on African-American Lives they used DNA to determine your heritage, and you were quite surprised to learn that many of your ancestors came from Angola.

CT: Yeah, I thought I was from Ghana, but I’m definitely from Angola and Cameroon. My father’s lineage went back to Angola, and my mother’s to Cameroon. It was amazing, and it makes you feel good, when you get a better idea of where your ancestors came from.

KW: What was it like going to the actual village in Angola your father’s side of the family was traced back to?

CT: It was very interesting. We traveled from this tiny slave castle on the coast all the way to this tribal region out in the bush where they said my father’s family might have been from. It was amazing.

KW: After Kanye West said, “George Bush doesn’t care about black people,” during that Katrina benefit for Hurricane Relief, the camera first went to comedian Mike Myers who had obviously been taken by surprise and looked like the proverbial deer caught in the headlights. He quickly threw it over to you. How did you feel at that moment?

CT: I didn’t know what Kanye’d said. I was just surprised that they went to me so fast, because I wasn’t ready, or on a soundstage. I was like, “What?” and they were saying, “Go! Just go! Do what you can. Get some money.” But I wish I had known what he’d said, because I would have followed up with, “He’s right.”

KW: So, you agreed with what Kanye said when he went off the script.

CT: Yes, I did. I didn’t agree with everything he said, but everybody definitely needed to hear an urgent cry of concern for the people of New Orleans and about what was going on because they needed assistance right then and there.

KW: You’ve been nominated for the NAACP Image Award twice before, for both Rush Hour 1 and Rush Hour 2. I’m on the nominating committee, and I hope that three times a charm and that you win this time.

CT: Yeah, we need one. I don’t think I have an Image Award yet.

KW: Maybe that’s because most awards organizations don’t treat comedians with same reverence they have for dramatic actors.

CT: I don’t know why that is. Some people say that it’s harder than doing drama.

KW: Yeah, I’m convinced that it’s harder, because you see more comedians crossing over to do drama successfully, than vice-versa.

CT: Yeah, that’s because comedy is very difficult. It’s like golf. You have to do it all the time to really perfect it. It takes a lot of practice.

KW: Is that why you continue to do stand-up?

CT: Yeah, because it keeps you sharp, it keeps in touch with the fans, and keeps your timing great, so it’s a good thing.

KW: You’ve handled several dramatic roles quite well. So, what will you do next, a drama or another comedy?

CT: I don’t know exactly what I’m going to do next, but I want to do a stand-up type movie.

CT: Yeah, maybe like a stand-up concert. So, hopefully, I can get it together and do that.

KW: What advice do you have for anybody who wants to follow in your footsteps?

CT: I would say, just believe in yourself, go out there and work really hard, and do it. And when doors open, take advantage of every opportunity you can.

KW: Have you ever been to my hometown, Princeton?

CT: Princeton? Yeah, I been up there with [Professor] Skip Gates. I love it up there.

KW: Well, you gotta come back for another visit. Thanks for the interview. I just hope you do start making movies a little more frequently for your fans.

KW: Six years is too long a wait.