Anthropology Ph.D. student Sara Quinn (Julianne Nicholson) was heartbroken after being inexplicably dumped by her boyfriend. In fact, she’s so upset she’s decided to shift the focus of her doctoral dissertation from the Feminist Movement to the male mind.

Because she doesn’t really understand men, she decides to study what makes them tick. Her research method is simple enough, if not exactly scientific in nature. She simply sits in a practically bare room across a table from each of her subjects, one at a time, with a tape recorder, not asking questions or being judgmental, but just letting them vent about their relationships with women in any way they wish. Among the guys participating in the project are strangers, colleagues and even her academic advisor (Timothy Hutton). 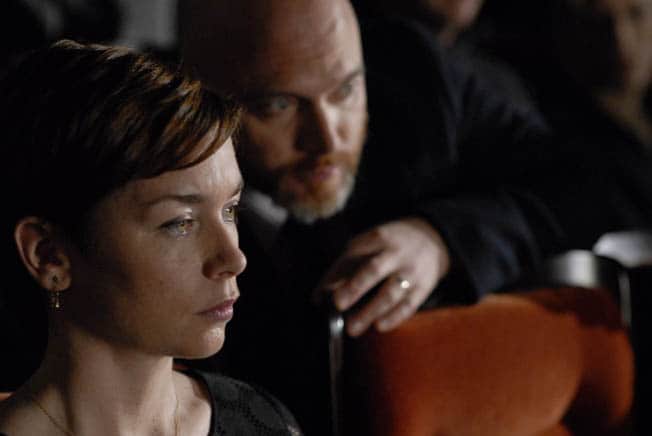 The interviewees are given numbers instead of names to protect their privacy, and they obviously feel safe enough with this arrangement to share their kinkiest of fantasies and fetishes. Meanwhile, Sara, who is supposed to be compiling data to get her degree, is ostensibly gleaning info for her own personal future dating reference.

Adapted by its director/co-star John Krasinski from a collection of short stories by the late David Foster Wallace, Brief Interviews with Hideous Men plays like a series of improvised stand-up routines. This explains why Krasinski had the sense to stack his ensemble cast with a combination of seasoned comedians (like Will Forte and Will Arnett) and character actors (like Bobby Cannavale, Frankie Faison and Joey Slotnick), performers capable of holding their own on stage alone sans props and scenery.

Alternately bizarre and hilarious, Brief Interviews ultimately proves more shocking than revealing of the male psyche. A funny flick apt to be most appreciated by the very open-minded.