Milt Larsen was born in Pasadena, California, to a family of magicians. Considered one of the greatest magicians of our time, Milt Larsen shares with his brother, a star on the walk of fame in Hollywood, California. A speaker, talk show radio host, writer, actor, performer, lyricist, magician, entrepreneur, and the creator of ‘The Magic Castle,’ a world famous, private club for magicians and enthusiasts in Hollywood, California, Milt Larsen was born with tricks up his sleeve. His mother was a T.V. personality known as ‘The Magic Lady.’

Milt’s father was a performing magician, as well as a top Los Angeles defense attorney. One of his dad’s clients happened to be Mrs. Houdini – wife of the most famous magician and escape artist of all time. It is with such a storied past, that a young Milt Larsen and at that time his brother – grew up to create the dream that his father set into motion and Milt Larsen would fulfill. As Milt told me, ‘To a magician, nothing is impossible.’ It is with that beautiful vision, that I am honored to introduce to you The Magic Castle, and it’s fantastic founder.

The Magic Castle is the private clubhouse for the Academy of Magical Arts, Inc, a very special organization devoted to the advancement of the ancient art of magic. The purpose of The Academy is to encourage and promote public interest in the art of magic with particular emphasis on preserving its history as an art form, entertainment medium, and hobby.

The Magic Castle began its life as a private home built in 1909 by banker and real estate magnate Rollin B. Lane. Mr. Lane owned much of what is now Hollywood, dreaming of turning his land into orange groves, farms and ranches. But a severe drought brought an end to his dreams and orange blossoms never filled the valley.

After the Lane family moved away in the 1940s, the mansion was divided into a multi-family home, then became a home for the elderly, and was finally transformed into a maze of small apartments. By 1960, the fate of the Mansion was uncertain. Then Milt Larsen met the owner, Thomas O. Glover.

Milt was a writer on the NBC TV show “Truth or Consequences.” His office was on the ninth floor of a Hollywood office building that overlooked the Lane mansion. Milt’s late father, William W. Larsen, Sr., was a renowned magician and had long dreamed of building an elegant private club for magicians.

The Lane mansion would become that club. In September of 1961, Milt and a crew of eternally generous friends and volunteers began the extraordinary task of returning a then run-down apartment building to its glorious past. After months of scraping and sanding, the rich Victorian elegance began to resurface.

The Magic Castle opened its doors at 5 p.m. on January 2nd, 1963. Today more than four decades later, the Castle has become the world-famous home to the Academy of Magical Arts, Inc.and their invited guests.

The Magic Castle is a performance venue for magicians, where the the ticketed public can dine and view shows at select times on select nights in a glamorous, old Hollywood style restaurant. The Magic Castle is also a private, members only club for magicians who must audition their magical talent before a voting board of other magician members, in addition to other steps to gain acceptance. Private members include many of the most successful magicians in the world, as well as a number of celebrities who enjoy numerous magic shows, variety arts performances, full service dining rooms, The Houdini Room, and several old style Hollywood bars in a classic Hollywood nightclub atmosphere, with elite membership, among more.

The first time I walked up to the doors of The Magic Castle nearly a decade ago, I was asked if I knew the secret password. I didn’t, so I was not allowed entry. On this particular Sunday, I not only had the secret to enter, I also got a private, grand tour from the founder himself – Mr. Milt Larson. As that adage goes, ‘when the student is ready, the teacher shall appear.’ And so, he did.

Exclusive Interview With Milt Larsen of The Magic Castle

Milt Larsen: You’ve got it!

Milt Larsen: (laughs) You thought, what the heck is that?!

Milt Larsen: Well, it’s a half century long story. We just had our 50th year anniversary of the opening of The Castle. My late brother and I were both family of magicians. And my Dad kind of had an idea for doing a club for magicians. He passed at an early, and it just never happened, so Bill and I were successfully involved in the television business, and my office at that time was what used to be Hollywood and Highland and there was at that time a twelve story building and I looked out my office window and saw this grand old decaying mansion like out of the dawn of ‘The Adam’s Family’…

Milt Larsen: …And as a gag writer in television, I tried to avoid thinking too much – but daydreaming about that old house that could be something. So at any rate, in the early 60’s, I met the owner of the property of this grand old house, and he really didn’t know what to do with it. He owned the whole hillside here, but that was just part of his property. And I convinced him that it was a pretty good idea for doing a club for magicians. And he, again like you, said ‘everybody’s fascinated with magic at an early age.’

He pursued his dream by being a very successful banker and real estate developer. I did mine by being a television writer, but magic was always the thing. But at any rate, making that – that part of the story short, we did a deal with him, and started building this place which was a private club for magicians, and Bill and I were very involved with magic clubs and the people that we knew, and my Dad had a magazine which is still going – Genii Magazine (for magicians).

Milt Larsen: And we were very involved with magicians, so creating a place where they could all hang out, seemed like a good idea. But we had no idea it was going to be anything other than my deal with Mr. Glover, who owned the property here, which was to lease the building, and we thought maybe we could do something on the first floor, and if that worked we’d take the second floor, and if that worked we’d maybe expand a little bit here and there, and that’s 50 years ago, and doing and expanding. But (when) we opened The Castle in 1963, we had 150 members, magicians, and non magicians. We figured very early on that magicians will not support a club for magicians. They just want to do card tricks for each other, and that’s it!

Milt Larsen: So we needed an audience, so we devised this idea, and Bill was at CBS, and I was at NBC, and we had friends in the industry, so we said, “We’re going to open up a magic club up in Hollywood.” And people said, “Well what’s that all about?” And we said, “Well, it’s gonna’ have a really nice bar!” (And people said), “O.K., we’ll be there!” 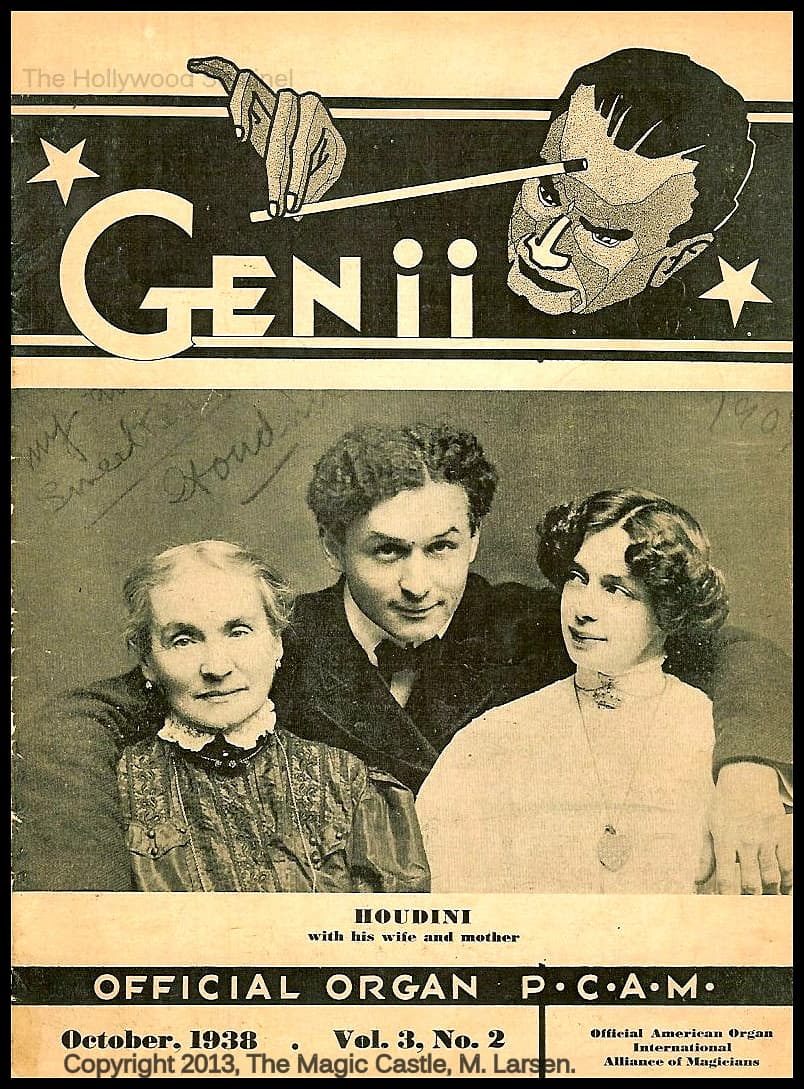 Milt Larsen: So there, when we opened 50 years ago, we figured maybe we’d some day be up to maybe three or four hundred members, and now, 50 years later, we have 5,000 members internationally, and probably the most talked about club (for magic at least) in the world.

Milt Larsen: But I think what really made it all happen – as you said, you were walking along and you look up and see this big old house, and people go, ‘Well I wonder what that is?!’ That was a place where Carey Grant and Orson Welles used to hang out!’ And they go, ‘Well that’s an interesting place!’ And the fact that it is a private club and you can’t get in it unless you know somebody, we’ve maintained this ‘secrecy of magic’ and so you can’t just fool around with that. And so at any rate, I think ‘that’ is part of what has made it a very interesting place. It’s like everything in my world kind of goes back to ‘Alice in Wonderland.’ It’s like, ‘What’s on the other side of the key hole?’, you know, and I think we’ve done that all of our 50 years, and people come through the castle, and you go through this secret door, and you have to have the secret word that nobody knows like ‘Open Sesame…’ Oops! I just said it!

Milt Larsen: And then you’re in a world of fantasy and mystery, and that’s what makes it kind of all come together, and made it ridiculously successful. And I said ridiculously, because I have nothing against that!

This interview will be continued in our next issue. Read about Milt’s new book below, and visit the official Magic Castle website in the link below to learn more.

My Magical Journey; by Milt Larsen, published by Brookledge Corporation, 7001 Franklin Avenue, Hollywood, CA, 90028, 295 pgs + 4 panel cover, full gloss and color throughout, cardstock cover, perfect bound. My Magical Journey is a beautiful book inside and out. As a publisher myself, I can’t help but get excited by the print quality of this book, beautifully printed in the USA by Sinclair Printing Company, with outstanding ink quality, density, and countless half tones throughout – a flawless creation. The book itself is excitingly filled with vibrant, full color images that pop off the page.

I commended Milt on the all of the cool pictures, and he told me, “I like to read books with lots of good pictures, so that’s what I wanted to make.” And he sure did. The images in this book alone make it worth owning – as a collectible work of old Hollywood, vaudeville, theatre, and magic. Add to that a fascinating life story of a truly fascinating man, Milt Larsen; the founding creator of The Magic Castle, and you have here a magical tome that is a must have for any fan of mystery or magic.

From page 25 of the book, Milt states, “Often, Dad would do a special mentalism act. One of the bits was summoning a little spirit that happened to live in an antique wooden teakettle. Once a week, I got to be the little kid. I hid in the bathroom and became the voice in ‘The Talking Teakettle.'” Get the book for even more entertaining and exciting stories.