While people are still dying as a result of the Boston Marathon Bombing; news sources reported yesterday that the FBI shot a witness who they state attacked them during questioning- some are not only trying to help put the pieces back together, but they are doing much more, including fundraising for the survivors of the bombing.

One such big hearted Bostonian- Guadulesa, is a rising new leader of American female abstract artists, who spends her time between Southern California, and her hometown. The award winning fine artist from Boston; Guadulesa has made a tribute to the victims with her latest work of art. Guadulesa has become known for abstract or loosely figurative works of art, which reflect spontaneity, strong rhythm, texture and color blends. Images may be seen on her website at: 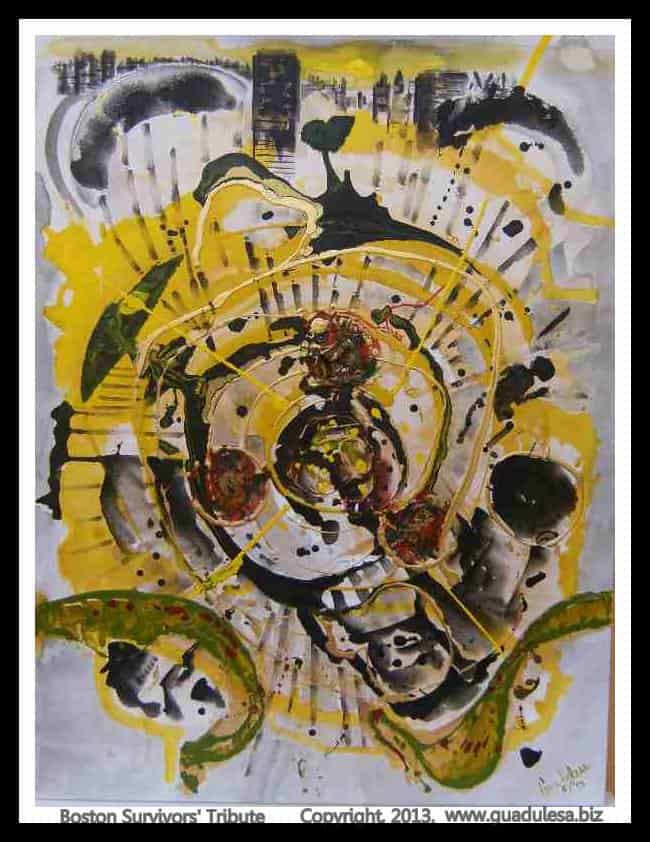 As it did many, the Boston bombing greatly affected Guadulesa. On April 15th, 2013, at 2:49pm Eastern, two pressure cooker bombs were detonated approximately 13 seconds apart, near the finish line of the Boston Marathon. Three people died, with a reported 264 persons injured. Guadulesa, states, “I was actually in the hospital visiting with my daughter-in-law, so I was a little worried about her. when news of the bombing aired, we were all so shocked.”

Remembering the Victims who Died

The new art work created by Guadulesa abstractly represents the three victims, with respect to the memory of them. The three victims who died in the Boston Marathon Bombing were all spectators of the marathon. They were;

Lu Lingzi was a 23 year old Boston University graduate student from Shenyang, Liaoning, China. She was killed by the first bomb.

Krystle Marie Campbell, 29, was a restaurant manager from Medford, Massachusetts, she was also killed by the first bomb.

Martin William Richard, an 8 year old boy from Boston, had his life ended by the second bomb seconds after the first explosion.

Remembering the Victims who Lost Arms and Legs

While a little boy, and two young women died, and 14 people had to have their arms or legs cut off due to massive injury from the bombings, some individuals revoltingly have actually expressed more compassion and love for the two perpetrators- one dead, than the real victims. And yet, many still suffer to this day, with painful, physical recovery, as well as the psychological pain of trying to begin a new life without arms or legs, and the traumatic stress of feeling their life still in danger-and they still need our help.

Artist Guadulesa, being from Boston, decided to do something about it to try help. She states, “I just could not believe that anyone would choose such an event, which people regard as international, to inflict such misery onto families and multi-national athletes. It made me remember 9 / 11 and the effect that had on us, because one of the flights had flown out of Boston’s Logan International Airport. I urgently wanted to do something to help.”

With that in mind, the artist went to work on the creation of a new art work, titled ‘Boston Survivors’ Tribute’ pictured here. She intends to find a donor to purchase the work, and donate it to the Boston Medical Center, where many of the Boston bombing victims are being treated. Further, 10% of the funds donated will also be given to the One Fund Boston organization, which is the City of Boston’s official non profit funding organization -partly established by the Mayor of Boston, to help victims of the bombing.

Guadulesa: Yes, I do – many friends, in fact. I used to live about four miles from the site of the bombing.

Guadulesa: I was there a year ago. Thank goodness my ninety five year old Godmother has moved to the suburbs. I would have been extremely upset. Recently, I arrived in Boston for my art exhibition there, ten days after the bombing. While I was there I was tempted to go the site, but something stopped me. I felt that it was still a crime scene, and it was dreadful to think of what happened there. I stayed away.

Guadulesa: As life goes, mainstream news can report only what they are given. We can always speculate, but sometimes it takes many years for the truth to be unearthed. Some group sent around an e-mail, which denied a lot of the evidence, and I just deleted it right away. It was such an insult to those who were injured and to families who lost their loved ones. The human mind can be very devious.

Guadulesa: I always tell people that Boston has a reputation for being an academic city, but it’s very much a blue-collar town. Native Bostonians have a grit to their manner, no matter the socio-economic class. We’re a small city, so we rub shoulders with each other along the way. You develop strong survival instincts. I do a lot of walking in Boston. In certain neighborhoods, I automatically put on my street persona, on guard- not afraid, just aware. Bostonians are ready to be friendly and warm, or cold and distant, depending on the situation. We know how to judge (circumstances).

Guadulesa: Boston used to be very conservative, but I think collectors have broadened their interests. The art scene used to be centered in Back Bay – Newbury Street – and Beacon Hill. Then it spread to the South End, as galleries were priced out of those areas. I used to live in the South End at the Piano Factory, Boston’s oldest artist residence. Since the ’90’s, Mayor Menino has promoted the Arts and Artists for the contribution they make to the city’s image and economy. I was a member of the Mayor’s Boston Cultural Council from 1997 to 2003. There are Open Studio events in many neighborhoods now. Middle class Bostonians have become strong collectors and add to the vibrancy of the arts.

Guadulesa: I know that the memories will last for a long time, and they may never be erased. I hope that Bostonians, as we have done in the past, will pull together and lend emotional support to the victims. The survivors are, of course, victims also. Why them, why our city, why that time and place? Answers can never be sufficient for those most deeply affected. As we are told, time heals. I would tell them to allow that healing – physical and emotional – to take place, no matter how long it takes. We all need to feel whole.

Guadulesa: Already, a close artist friend of mine participated in a Cambridge Peace March. People are reaching out to offer comfort. There are concerts and other special events, which are raising money for the survivors. I believe that the contributions will help survivors realize that we want to help to ease their pain. Knowing that strangers are reaching out to help has to bring some peace of mind. We really want to ease their hearts. Artists can work together to generate love and peace. The strong intention of love can bring peace to those who open their hearts to it. That may seem esoteric, but we have seen it work.

Guadulesa: I am an abstract artist, so the painting re-creates the energy experienced during the bombing, without being too literal. Sometimes I work with collage to directly refer to a particular event, but this time, I chose not to include too many details. I feel that the survivors will hold those details for too long as it is. They don’t need to be reminded. I have included a skyline, three focal points in honor of those who lost their lives, a running shoe, and a broken finish line. I want the viewers to feel the shock of being in the midst of that terrible moment.

How to Support the Work; Boston Survivors’ Tribute

For more information on Guadulesa, visit her website at:

To inquire about being a donor for ‘Boston Survivors’ Tribute’ pictured here, or for commission works or other purchases of existing inventory, contact the studio of the artist at the above website, or e-mail: [email protected]

You may make a donation directly to the One Fund Boston at https://secure.onefundboston.org/