Recently my paths crossed with Alexander Palermo owner of The Divine Pasta Company while searching for some of the best pasta and pasta sauces available for the Coastal Vineyards Gourmet Pasta Club!

Alexander Palermo founded Divine Pasta Company in 1992 with a mission to create hand-crafted pastas and sauces using traditional methods and only the finest ingredients. Divine Pasta Co. products are made with fresh eggs, 100% durum semolina and fresh water, and never include preservatives or artificial ingredients of any kind.

Growing up in Rome, Alexander’s childhood revolved around food. In fact, in the Palermo family, food was such serious business that his German mother opted to live with her in-laws for six months after marrying his father just to learn authentic Italian cooking methods. Nearly every weeknight, Alexander would camp out in the kitchen and do his homework as his mother cooked dinner. Looking at a calendar was never necessary- changing months were made evident by the foods of the season- summer was artichoke time, and the smell of chestnuts roasting meant fall was in the air. For The Palermos, eating a homemade meal on Christmas as a family was far more important than exchanging gifts.

At the age of seven, Alexander’s family moved to the United States, and took up residence in Wisconsin. Though the Palermo family was living in the states, it didn’t stop them from returning to Italy on a yearly basis. Each summer, Alexander spent three months in Sicily and Rome. Summers in Sicily kept him focused on the importance of food and family, and inspired his first business, the Divine Pasta Company. 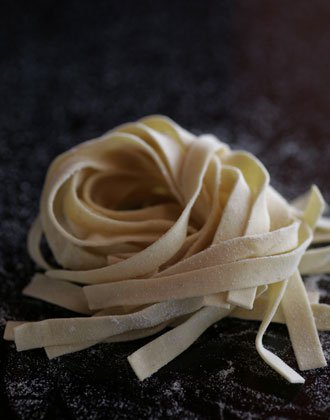 After living in Wisconsin for over ten years, Alexander was accepted to Malibu’s Pepperdine University, where he majored in Business. The final semester of Alexander’s tenure at Pepperdine was dedicated to the start-up of the Divine Pasta Company. A weekend trip to La Jolla held the key to his inspiration. Peering though a window, Alexander noticed a neighborhood cafe making pasta from scratch. The Palermo family always made their own fresh pastas, and the notion of selling small batches of authentic, home style pastas and sauces seemed so romantic to Alexander that he couldn’t resist trying his hand at the craft.

Upon returning to Malibu, Alexander purchased a pasta machine, and began making small batches of pastas and sauces by hand out of a commercial kitchen. Divine Pasta grew over the years and eventually became the anchor of his business, helping him to acquire a variety of additional food manufacturing companies based in both the United States and Italy, as well as start his first ever restaurant endeavor, Cube Marketplace & Cafe in Los Angeles. Today, Divine Pasta’s fresh pastas and sauces are still made using traditional methods, and never contain any artificial colors, flavors or preservatives. Divine Pasta Company products are sold to upscale restaurants throughout Los Angeles and in small grocery stores throughout the United States, including Cube (www.CubeMarketplace.com).

Signing off at Pigging out! Rocco “Boss Hog” Loosbrock