If you were one of those people who just never felt right about spending the money to enjoy one of the world’s most delightfully, delectably delicious dishes on Earth, then I’m happy to announce that RIGHT NOW is the perfect time to buy yourself, family, friends, and loved one’s some gourmet lobster while the picking and the pricing is out of this world!

Check out what the New York Times reported just this morning…

Luxury on Sale: The Lobster Glut

I’M a sucker for a sale, the kind of shopper who tallies the amount “saved” rather than spent. My arithmetic goes like this: It makes more sense to buy the $125 cashmere sweater marked down to $95 than to pay full price for the $80 one.

Following this logic, when I heard on the radio that lobster prices were the cheapest they had been in 25 years, I decided that the sensible thing to do was to run over to the fish store and buy a couple for dinner. 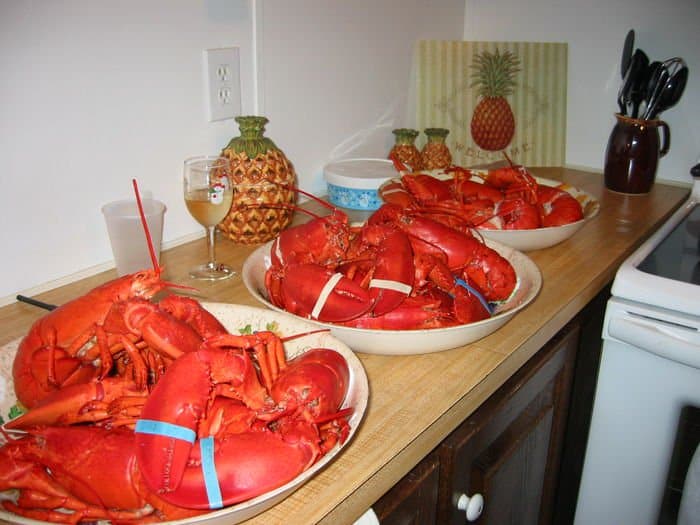 So what if I spent nearly $30 on lobster for two on a weeknight when we weren’t celebrating anything? It cost a third less than it would have last year.

While fantasizing about ways to cook my bargain crustaceans, I asked Lewis Spada, the manager of Fish Tales in Brooklyn, why prices were so low.

“The economy,” he said. “People just aren’t buying, but in Maine their stocks are loaded. It’s all about supply and demand.”

Act quickly, because, according to Trevor Corson, the author of “The Secret Life of Lobsters” (HarperCollins, 2004), this situation is probably not going to last much longer.

“The lobster fishermen are victims of their own success,” he said, explaining that because they have managed to make lobster fisheries so sustainable, they have recently had record catches.

Until now, the excess catch was funneled to Canadian processing plants, which sold them frozen to chain restaurants. But the bad economy hit the Canadian plants hard enough to shut down operations. 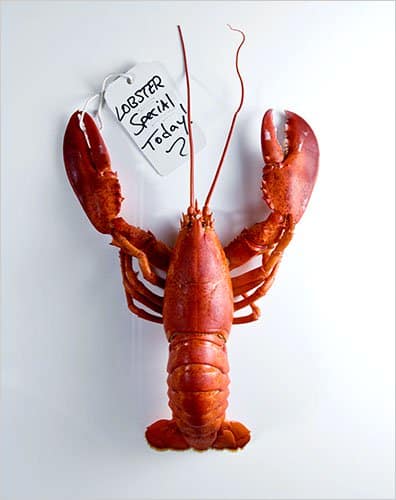 That means cheaper lobsters for you and me – at least temporarily.

“It’s gotten to the point where for the fishermen, it’s not worth their while to catch lobsters, so the supply will decrease,” Mr. Corson said.

My timing on my little lobster splurge was even better than I’d realized.

Generally, when serving lobster, I stick to the tried and true: steaming them, then serving with melted butter. I’ve been afraid to experiment; who wants to gamble with ruining such a pricey purchase?

With fire-sale-priced lobsters, I had no such inhibitions. Visions of more opulent lobster dishes swam across my mind. I saw rich bits of pink lobster meat coated in creamy sauce over soft egg pasta. I remembered how marvelous broiled lobster, mottled with charred bits, tasted when dipped in garlicky olive oil. And finally, I thought back to a saute of lobster with lobster mushrooms I had at a friend’s house, the dense, meaty texture of the mushrooms echoing that of the shellfish.

But before I could cook my lobsters, I needed to end their watery lives as quickly and humanely as possible. In the past, I would always drop them into a pot of boiling water and clamp the lid on tight.

Trevor Corson had another suggestion.

“The best way to kill them, according to animal welfare agencies, is to put them in the freezer first for 15 minutes,” he said. “It slows their metabolism.”

After that, Mr. Corson suggested, put the lobster on its back and slice lengthwise through its soft underbelly.

“Lobsters have a decentralized nervous system,” he said. “The tail may still twitch, but the claws will go limp so you’ll know its dead.” Killing a lobster this way before boiling. steaming or broiling it, he added, makes for less rubbery meat.

So I tried it. After freezing and slicing up my lobsters, I ran them under the broiler. My plan was to serve them with garlic oil. But their scarlet hue reminded me of blackened redfish. Making a vibrant, spicy Cajun butter to souse the lobster seemed like a good idea.

As Mr. Corson promised, the lobster meat cooked up tender yet firm, and the spicy butter gave it a fiery kick without diminishing its sweetness.

The mushroom saute was my next foray. My local market didn’t have lobster mushrooms, but it did have oyster mushrooms, which were at least thematically the same, and maitakes.

Seasoned with sesame oil, ginger root and soy sauce, this lobster variation was bright and boldly flavored, with the mushrooms adding a woodsy earthiness to what’s now my favorite version of surf and turf.

Last, I indulged in luscious lobster pasta topped with a savory sherry sabayon. It was slightly more labor-intensive than the usual cream sauce, but more ethereal, too.

As an extravagant, final touch, I crowned the pasta with glowing beads of salmon caviar. True, this wasn’t on sale. But I couldn’t resist celebrating how much money I saved on the lobster.