I’m glad we’ve been able successfully, peacefully and cooperatively settle the little things in life as of late, tiny mattes like who should be the supreme ruler of the most powerful nation on Earth, or will it take a mere seven hundred trillion dollars tossed into the pot to fix a few mismanaged financial decisions here and there or will it take eight hundred trillion. Man that’s more than I make in an entire year!

But the problem that has been plaguing me for so long just doesn’t seem to be within the grasp of the numerous geniuses available on the planet to solve all the problems at hand. What I want, or better phrased, what I NEED is bacon sold in vending machines. 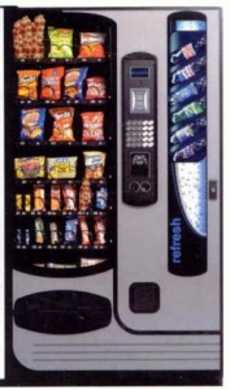 It just makes perfect sense, doesn’t it. I mean everyone loves bacon, right. We’re a society on the go, constantly running from appointment to event like chickens with our heads cut off, so doesn’t it make sense that we should have health enhancing, powerfully protein packed bacon available to us in vending dispensers, right along side all those sickeningly sweet and sugary snacks and empty carb chips, cakes, cookies and crackers.

If they would simply keep some hot, pre-cooked strips of bacon in the vending machine, I know all of us would be much happier and healthier people. Turns out I’m not the only person who feels this way.

Guess what, in Scotland, they have vending machines that sell and what they call “Bacon Rolls” You put your money in the slot and the machine then begins to cook the bacon and the accompanying roll with halogen lamps which gets the job done in just twenty seconds and then “ping” your hot, tasty bacony snack is ready for your joyous and profoundly thankful consumption.

What would be easier for society, moving everyone over to Scotland or simply importing and applying the technology already proven to work over here to the states? Should we take a vote? Finally an election about something that truly matters to us all.