Ok People, let’s actually try looking at the verifiable FACTS before making up our minds and spouting off with supremely arrogant zeal about bacon and our health!

Certain people stand on their soap box and wax prolifically about how Bacon Freaks should REPENT, for “the end” is very near and absolute, eternal destruction is just upon us now!

Yeah, I hear these pork punching pontificators every day, as the leeringly lecture us out their flaming blow holes about the terrible health risks of human beings consuming this evil substance known in the depths of Hades as BACON!

Actually, eating bacon is ten times healthier than eating ice cream! Not that I have anything against ice cream, because in fact, I love it. Heck, I love it so much, I put bacon in it just to prove the depths of my affection for this sweet, frozen dairy confection. 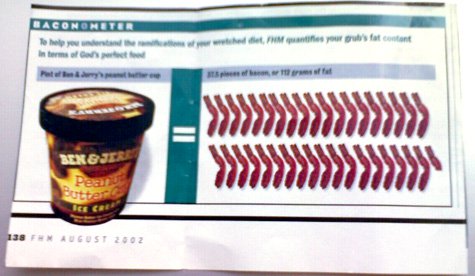 All the way back in 2002 the popular men’s magazine FHM published a graphic explaining recent clinical studies that showed one would have to eat exactly 37.5 pieces of bacon (112 grams of fat) to ingest the amount of fat found in a popular brand of ice cream that I simply love too much to mention by name, because I think they are totally awesome.

That means that when preachy, poison-penned “Health Nut Hannah” breaks up with her boyfriend or girlfriend, whatever, and sits down to pout over a pint of ice cream, she’s actually eating MORE fat than you or I id we were to sit down and smilingly enjoy a plate piled high with 37 pieces of delectably delicious bacony goodness.

Now I’m a self proclaimed Bacon Freak, but I can’t honestly tell you that someone eating 37 pieces of bacon in a single sitting happens very often if ever at all. Most Baconistas will consume between 3 to 6 pieces in a meal.

I can tell you however that I have on numerous times watched people finish of f1 and sometimes even 2 or 3 pints of ice cream while watching the “lobotomy box” with the munchies. I’ve seen an entire gallon of ice cream disappear in a single sitting on several occasions.

Not to mention the fact that clinical studies, doctors, psychologists and cardiologists show that anger, sadness, aggression, depression and rage are all terrible sources of stress and strain on the integrity of our health, while happily smiling and enjoying oneself in bacony bliss is actually positive and life preserving.

Plus we’re getting a ton of good, power producing protein and not just a bunch of wimpy, weak and whiny empty carbs!

So for us Bacon Freaks, this is some extremely highly valuable information and powerful ammunition to help us once again prove our point, that eating bacon is a actually a very wise dietary decision!