NewsBlaze News
Home Entertainment Food A Martini with Bacon anyone?

The secret to making a bacon Martini!

O.k. earlier this week I published a story on Bacon Vodka drink, this has cause a little bit of a controversy as fans of the Bacon Martini say it is a far better drink. So I have done some research on this beverage and found out that there is an entire site dedicated to it at www.baconmartini.com.

If you’ve ever had a vodka martini, shaken not stirred, then imagine that flavor but now add a slightly spicy and salty bacon essence, and you are pretty much on your way to getting a feel of what to expect. It’s obviously saltier than a normal martini and it has a bit of tangy “heat” in both the original flavor and lingering aftertaste. 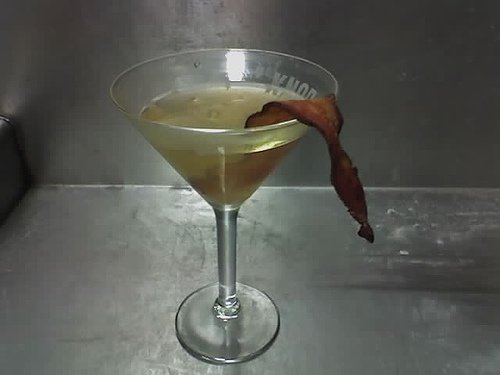 So what exactly is in it you ask? Great question and one that has been just a little bit tricky getting bartenders to fully open up and reveal the mystical magic of their mysterious mixology. It seems each bartender and establishment has their own special, unique twist on their preparation of the drink, but here’s what most of the master mixologists seem to agree on.

It all starts with placing 3 to 5 slices of medium-well cooked gourmet bacon in a decanter, jar or large-mouthed bottle of vodka for 48 to 72 hours.

Now here is where the first controversy is going to begin, as any purist will tell you that the “literal definition” of a martini means you use gin, not vodka. They’re “literally” correct but this martini tastes much better with vodka, so let’s just move on from that point.

This drink is actually made at the Doubledown Saloon in Las Vegas. Make sure you try it on your next trip!