The action-packed, modern day vampire film TWILIGHT was released in theaters on November 21st, 2008 which unleashed a worldwide movie phenomenon that readers of the books already understood. The gothic romance became a hit of epic proportions around the planet, bigger than even most of its readers could have predicted.

The second installment of the film franchise, THE TWILIGHT SAGA: NEW MOON directed by Chris Weitz, was released November 20, 2009, cementing its further success. Groups popped up in every civilized country discussing the film, and obsessing over its stars and the next movie. 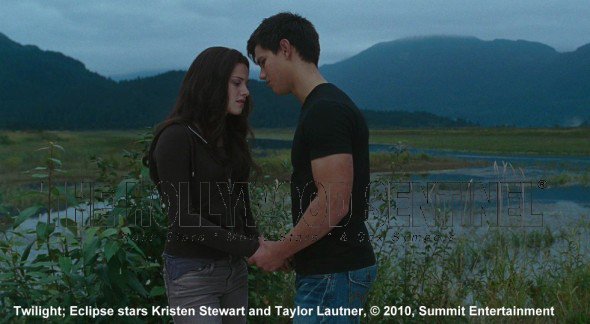 Like other epic films; Harry Potter, Star Wars, Star Trek, The Lord of the Rings, and others, Twilight has created its own subculture of fans; twi-hards, the most devoted, all night camp out first-dayers to the films, dressing the parts they feel most identity with, much like an outing at a modern day Rocky Horror Picture Show for the young and dramatic.

The Twilight films have sparked renewed interest in vampires, werewolves, and horror, with many subcultures of teenagers around the U.S. sprouting wolf tails – with animal tails clipped on to their rear, and visualizing shape shifting (wolfies) while other kids wear fangs and pale face make up (vampire clans). To any old school Bauhaus or Siouxsie fans out there, this is of course, nothing unfamiliar.

The TWILIGHT film series stars the now real life couple, the sexy Kristen Stewart, and handsome Robert Pattinson, who most fans have strong feelings about, which ranges for many girls- from sheer hatred of Kristen- out of jealously, or a preference of the characters of the clean cut, chiseled and handsome Taylor Lautner, over the more darker, mysterious Robert Pattinson, or vice versa.

To understand the enormous success of the Twilight films, The Hollywood Sentinel conducted some research, and concluded that the massive winning streak of the films are fueled by 4 main factors which are; 1, the huge success of the book and its built in fan base with its readership, 2, the sex appeal of its hot, young new talent, 3, the successful ingredient of the vampire genre, which includes the elements fans are hungry for which entail (a), the topic of life after death and immortality which appeals to guys and girls, (b), the wild card of dangerous, unpredictable, and adventurous eroticism and sexuality which appeals to many young females, and (c), the intrigue of a timeless and romantic love in the modern day, which largely attracts women, and 4, the unique yin and yang of the vampire clan vs. the werewolves, of the subculture within the subculture, with dual battling forces that are both on the edge, yet are opposite, which appeals to guys combative and competitive nature who normally side with one team or the other. These elements, along with the solid script, good directing, and beautiful stars, have made the Twilight films some of the most successful motion pictures of our time.

The Twilight films tell the story of 17-year-old Bella Swan who moves to the small town of Forks, Washington to live with her father, and becomes drawn to Edward Cullen, a pale, mysterious classmate who seems determined to push her away. But neither can deny the attraction that pulls them together…even when Edward confides that he and his family are vampires.

THE TWILIGHT SAGA: ECLIPSE directed by David Slade (30 Days of Night, Hardy Candy), is currently the most popular film in the world. In this screenplay by Melissa Rosenberg, Kristen Stewart, Robert Pattinson and Taylor Lautner reprise their roles as Bella Swan, Edward Cullen and Jacob Black. The film brings back members of the Quileute Indian Nation, the classmates of Bella and Edward, and the legendary Volturi, a venerable coven of vampires who weigh and impose the laws of the vampire world.

In THE TWILIGHT SAGA: ECLIPSE, Bella once again finds herself surrounded by danger as Seattle is ravaged by a string of mysterious killings and a malicious vampire continues her quest for revenge. In the midst of it all, Bella is forced to choose between her love for Edward and her friendship with Jacob, knowing that her decision has the potential to ignite the ageless struggle between vampire and werewolf. With her graduation quickly approaching, Bella is confronted with the most important decision of her life.

Twilight creator Stephenie Meyer tells us how the characters of the film initially came to her in an actual dream, which obsessed her. She would then write frantically for the next several months, day and night, in secret, which became the first Twilight book. Unique of the writer of a vampire franchise blockbuster, is that Stephenie Meyer is a member of the Church of Jesus Christ of Latter Day Saints, otherwise known as “Mormons.”

Unusual also to the Twilight Saga as a massively successful film franchise, is the fact that its main character, Bella (short for Isabella), is a virgin, and the other main character, Edward, refuses to attempt to have sex with her prior to marriage, which is a vitally important thing to the L.D.S. faith. With the entertainment industry infamous for its immoral promiscuity, the infusion of more conservative values aligned with Mormonism, actually conforms well to the romantic, gentlemanly, and courtly renaissance romance that Stephenie Meyer successfully builds and weaves in to the Twilight saga.