NewsBlaze News
Home Entertainment Features Thanksgiving Morphs to the ‘Dark Side’ When We Consider The Pequot Wars!

Richard Schiffman’s snapshot of the historical realities behind Thanksgiving (The Truth About Thanksgiving: What They Never Taught You in School), published in the Huffington Post yesterday, was an eye-opener for me. After some cursory research on these misty (mystical) events (that supposedly are anchored in history) of Pilgrims at Plymouth Plantation, who gathered together with Native Americans in a harmonious harvest feast, I find myself questioning the integrity of this entire affair we call Thanksgiving. 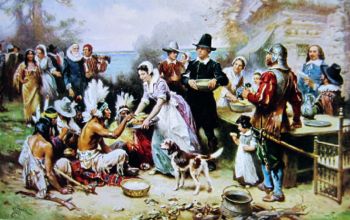 Still, one cannot know what really happened at this event in 1621, since it’s been diluted and reworked through time, promulgated as a solemn and sacred sharing of a meal with an impact and zest of the Last Supper itself. We do know, however, that relations with Native Americans deteriorated rapidly over the next twenty years (in the 17th century). What I’m getting at, is that Thanksgiving became an isolated, self-serving event of the English, merely trying to survive in a hostile New World.

By 1637, the communal part of the equation had vanished, kaputt, it was gone! Schiffman’s piece makes reference to the Mystic massacre of May 26, 1637, during the Pequot War, as a sort of milestone as to how relations with Native Americans would move forward through history. Between 400 and 700 Pequots (mostly women and children) were slaughtered that day. Sixteen years after the Plymouth Plantation get-together, relations had gone considerably south, down the drain consummately!

Richard Schiffman also points out that a history professor at the University of Texas, Robert Jenson, has pinpointed this event (the Mystic massacre) as the origin of Thanksgiving, derived from a speech given by Massachusetts Bay Governor John Winthrop in 1637. I need to read the full speech, but the bottom line is that the thankfulness comes in because they got rid of their problem, the Native Americans, who were cramping their lifestyle.

I will need to read some of Professor Jenson’s writing, because they seem to echo much of what I learned in my American Experience class at UT way back in 1972, when I had Thomas Lee Philpott as a teacher. Professor Philpott would rant and rave about how Native Americans were exploited by westerners, yet he had facts to back up everything he claimed and gave some excellent, dramatic slideshow presentations, that hit home as pieces of performance art.

Tom Philpott is a legend here in Texas and I imagine Professor Jenson is well aware of who he was and what he meant to us undergraduate history majors back in those days. *(Note: this only one sentence) Not that I don’t have a lot of research in front of me, to get at the truth about just what attitude we should take when reviewing the historical reality, of how we got where we did with our commercialized Thanksgiving, but I do think we can now take it with a modicum of temperance, when fathoming the crooked road travelled since 1621, which is probably not the one we get from a Hallmark Greeting Card or the cover of a November issue of Life Magazine (from the 1950s), snatched up at your local Half Price Bookstore. Too much stuffing, turkey, and pumpkin pie, you might surmise!

Richard Schiffman: The Truth About Thanksgiving: What They Never Taught You in School