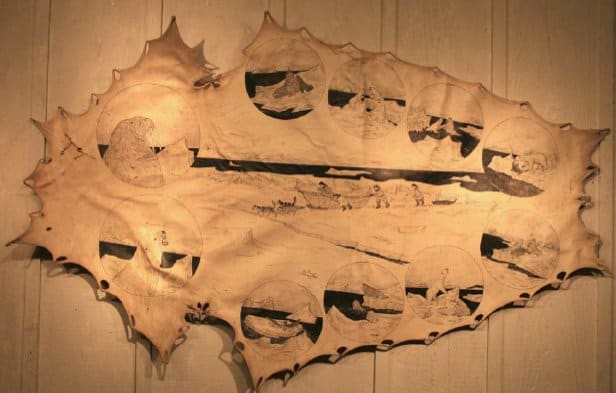 The unusual decorated sealskin by Judy Pelowook (1973) of Savoonga Alaska, depicts the cycle of life on the Bering Sea.

Pelowook was recognized for her fine pen and ink drawings on sealskin, bone and ivory. Most often her sealskin drawings are circular medallions, as seen on the perimeter of this skin; unique is the central scene.

She may have intended the skin to be subdivided into medallions and sold separately; evidence is the signature in each.

Currently, one of her single medallions fetches between $450.00 to $600.00: there are 10 such drawings on this skin. The central scene (signed and dated) depicts a hunting party, dog sled and team with walrus in tow on the sea ice. It is a fascinating document of the Yu’pik life.

Savoonga, a village on the island of St. Lawrence in the Bering Sea, is know as the “Walrus Capital of the World.”

Walrus are hunted for meat – all parts of the animal are used: skin, bone and ivory, including the oosik – the latter three for tools and carvings for sale. The villagers also hunt whale and seal for meat. Sealskin is often used in the absence of paper.