The Martians Are Coming

Radio listeners in 1938 thought the world was being invaded after hearing Orson Wells and the Mercury Theater players broadcast a Martian Invasion!

Announcer (with urgency): “Ladies and gentlemen, we interrupt our program of dance music to bring you a special news bulletin.”

Intuitively, thousands of CBS radio listeners, from Maine to California, turned up the volume on their radio dials.

“Martians have landed in the town of Grovers Mill, New Jersey!” the announcer gasped. “I am standing on a small hill observing what is just not possible. A silver spacecraft of some sort has landed here.”

In a voice trembling with fear he uttered his final words: “Huge slug-like beings are coming out of the spaceships, their ray guns are shooting deadly flames” … (pause) … “OH, NO!” (gasping sounds) … “More flying cylinders are landing. The military is moving in … their weapons have no effect … Arrrgghhh!” ( Fade out….Silence.)

Thus, CBS radio listeners heard the news of a Martian invasion. “This was all for real! Invaders from outer space had landed on earth!” Or so a hysterical listening audience believed. Armed with the radio announcer’s horrifying information, panicked radio listeners fled into the streets.

The date was October 30, 1998. What the radio audience actually heard was a production of H.G. Wells’ War of the Worlds. Orson Welles, the bad boy of radio, had just played a Halloween prank on CBS radio listeners, a prank that could make radio history, terrify a nation and inspire its citizens to watch the skies for flying cylinders.

While most young men his age were swallowing goldfish, playing pinball or learning to tango, 23-year-old Orson Welles, a self proclaimed genius, was hosting CBS radio’s Mercury Theater and contriving ways to impress his listeners. The October broadcast was his brainchild and intended to be a practical joke. He had no idea his trick would cause such fear and panic. At the close of his broadcast, Welles chuckled briskly and signed off with the words, “If your doorbell rings and nobody’s there, that’s no Martian, it’s Halloween!” Unfortunately, most of his audience never heard him- they’d already abandoned their radios to head for safer ground. 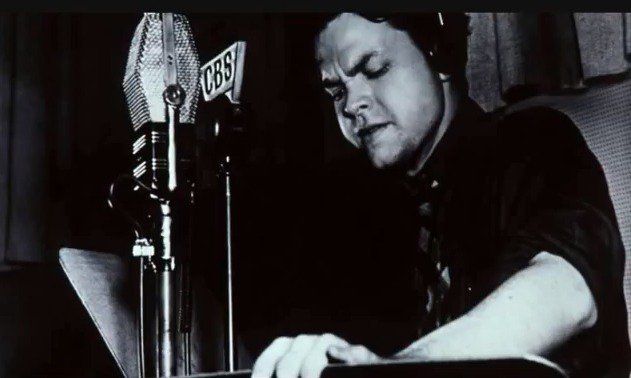 Despite the hysteria caused by the 1938 broadcast, it wasn’t until 1947 that the first report of flying saucers was received. On June 24, 1947, Kenneth Arnold, a highly reputable airplane pilot, claimed to have seen nine dish shaped objects zig-zagging over Mount Rainier. He described them as looking like a saucer would if you skipped it across the water. The term “flying saucers” was soon coined by the media.

Since 1947 the Air Force has received thousands of saucer sightings, the largest number coming in the late 1950s, coinciding with the launching of the Russian satellite Sputnik on October 4, 1957, and American Explorer 1 on January 31, 1958.

As a teenager, I remember the thrill and excitement felt by the whole family as we raced outside at 9 p.m. each night to track Sputnik through Dad’s field glasses. I suppose it was unavoidable, with all this stargazing, that sky-watchers would inevitably see more than just satellites.

In 1947, the Air Force set up a special file on UFO reports. Not unlike Fox Mulder, of The X-Files, Air Force specialists vigorously investigated these sightings. However, contrary to The-X-Files, most reports turned out to be nothing more than weather balloons, grindstone clouds, ball lightning or radar glitches.

But not all of these sightings can be so easily explained. The most famous of these encounters occurred in 1947 outside the town of Roswell, N.M. east of the White Sands missile base where the first Atomic bomb was exploded. Eyewitness accounts told of a saucer-shaped object that crashed on a nearby ranch land.

Rushing to the scene, several residents saw what they believed to be metallic debris scattered over a large area. They reported seeing what appeared to be four small, human-like occupants of the ship being taken away by the military. The area was immediately cordoned off by Air Force personnel. The military denied these rumors, insisting the residents of Roswell saw nothing more than a weather balloon.

Whatever it is people are seeing up there, weather balloons or manned spaceships, there are thousands of objects floating around the Earth every day. Since Sputnik 1 was launched in 1957, 4,000 satellites have been put in orbit. In 1962, a 21-pound fragment of Sputnik 4 crashed at the intersection of Park and N. Eighth Street in Manitowac, Wis; in 1978, another Soviet satellite came crashing back to earth, contaminating hundreds of miles of Canadian territory with radiation; In 1981, a Soviet satellite exploded into 135 pieces after colliding with space debris. Of the more than 7,000 object floating in space being tracked from Earth, only 5 percent are satellites.

It’s been 30 years now since that historic walk. Like a lot of people back then, I envisioned a different kind of world by the year 2000. Maybe it came from watching too much Star Trek in the 1960s, but I imagined by now grand spaceships, like the U.S.S. Enterprise, would be shuttling passengers through a shimmering galaxy – planet hopping among the stars, enjoying guided tours to Venus and Mars. And that romantic moon above was sure to replace Niagara Falls as America’s favorite honeymoon resort. Maybe that giant leap wasn’t so big after all.

Millions of reputable citizens all over the world believe in the sightings of flying saucers. There are also those who swear they see the Lock Ness Monster, “Big Foot”, Elvis, and come Christmas Eve, someone, somewhere, swears to have seen Santa Claus and his eight tiny reindeer.

Should we believe in these sightings without actual proof of their existence? Are they genuine, mythical or the product of an active imagination? The answer is most likely all three.

Many years ago, my then, five-year-old nephew was afraid of the dark. It wasn’t so much the dark he was afraid of, as he often told me, but the monster behind the closet door. I’d reassured him many times that there were no monsters in our house, but it was little consolation to his unreasonable imagination. “I know there’s no monster on the other side of the door, he’d tell me bravely, but sometimes I think there is.”

There are times when the most real things in the world are those we can’t see. Like the five-year-old in all of us, it’s just a matter of what we want to believe.

Radio took center stage in a postwar America. Families gathered together to engage in conversation, and play parlor games such as monopoly, checkers and cards while their living room radio played softly in the background. But by the late 1940s, the influence of network radio programming on households began to wane. Television, the slayer of family conversations, sat patiently in the wings waiting to make its grand entrance and become the new provider of family entertainment. TV demanded our full attention. With the coming of TV, families gave up entertaining ourselves to be entertained.