Holyoke, MA – In a medium-sized art studio located in Holyoke, Massachusetts, Dean Nimmer creates “intuition” art, a form of abstract art. His artwork is displayed all over the walls, some oil paintings and others mixed media. The spot is pretty well-kept except for one area that’s still getting organized – the desk area.

That site is an ordinary art studio, but the man and the works hanging on the wall do not represent the typical artistic world. What makes this man dressed in a plaid shirt and dungarees so extraordinary? It’s not that he recently completed his first art book, Art from Intuition, published by Watson-Guptill in 2008, after working on the manuscript for ten years.

It’s not that he recently retired as a professor at Massachusetts College of Art after 35 years and is now part-time teaching at Holyoke Community College. It’s not that he was the lead drummer of the Baroques, a psychedelic rock band that was active in the sixties. It’s not that he is well-known for his interpreting artworks by song. It is that he is so innovative in abstract art. Nimmer has widespread acclaim for creating one thousand drawings in one year. 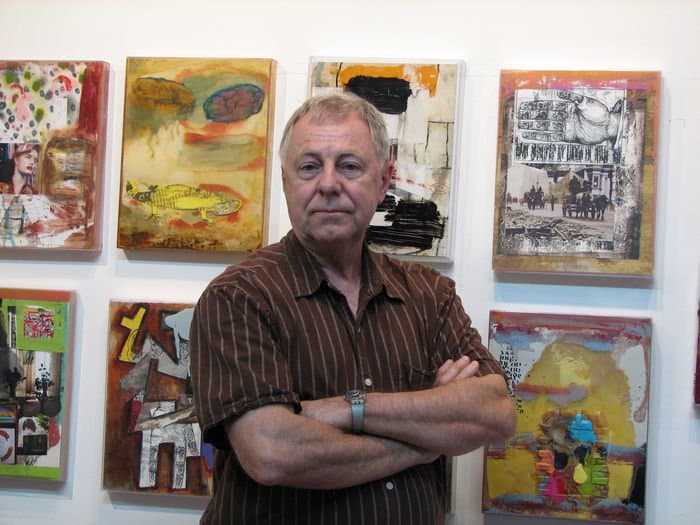 “In my background, I’ve become known for having done one thousand drawings in a year. A self-imposed marathon to get myself out of a rut of obsessing on one piece at a time trying to make everything perfect,” Nimmer said.

This career change was a positive shift for him. No longer concentrating on just one work at a time, Nimmer expanded upon the number of mediums that he worked with and the range of imagery that developed as a result. 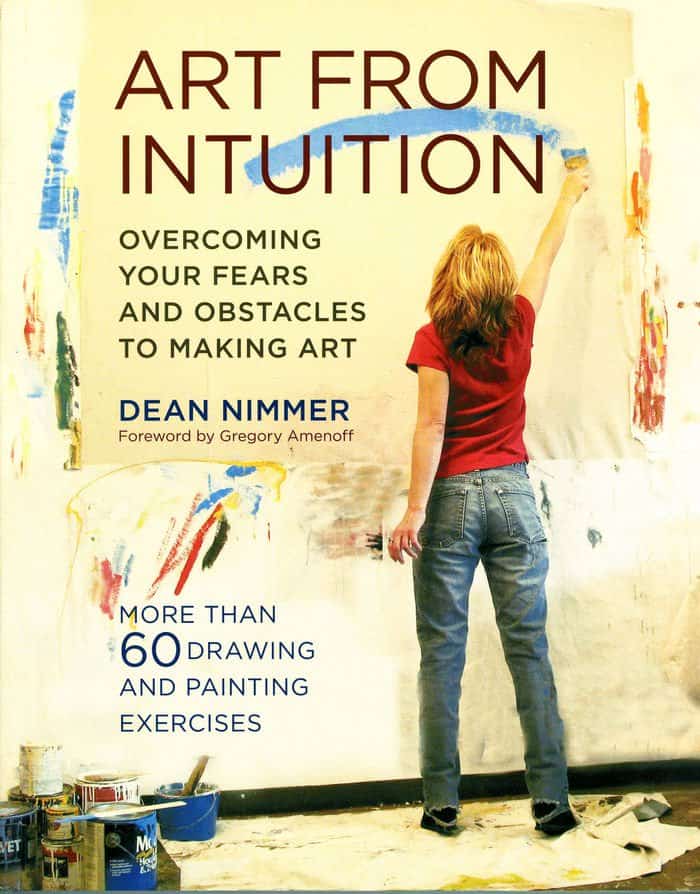 The decision to try to create one thousand drawings in a year came about after a trip to Ireland where he taught an art course to several Massachusetts College of Art students. He had a student who was not interested in attending classes and doing class projects and homework.

“He wound up being absent a lot. When I finally caught up with him after three days of a two week excursion there, I said, “You’re already twenty-five drawings behind based on what we’ve been doing, so that’s what you need to do today. You’ve got to catch up.’ I wasn’t asking him to do finished quality work, but that’s the amount of effort. 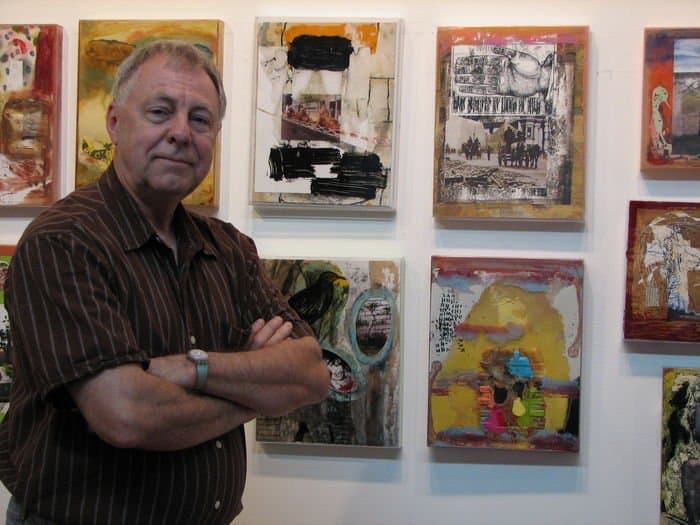 Well, he got very frustrated very quickly and didn’t complete the assignment,” he said.

Nimmer put his thinking cap on. “It made me think, ‘Well, is this a practice what you preached kind of thing? Is it unreasonable to try to get somebody to push themselves to see what happens when you do that?” he said.

Nimmer accepted this challenge himself. “So I did my own twenty-five drawings that night. I brought them in and went and got [the class, including the uninterested student] and showed them that not only is this possible, it’s really something if you wanted to do one thing to improve your attitude towards working, push it. And don’t obsess on each individual piece. And don’t start thinking about whether it’s any good or is it even when the teacher wants,” Nimmer said. 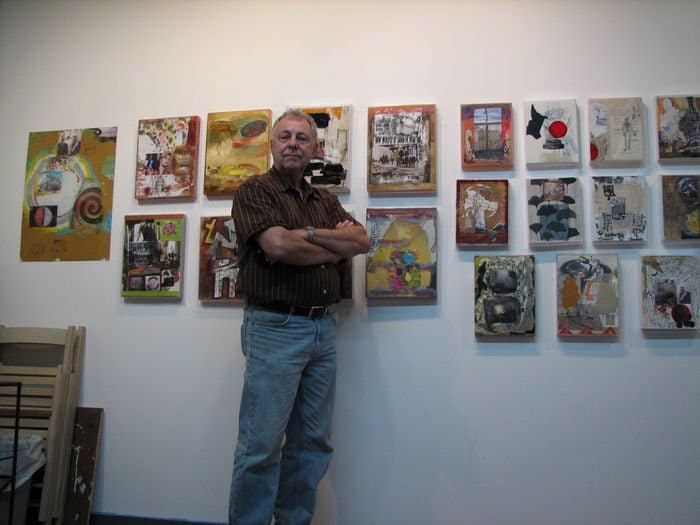 This artistic passion is something Nimmer always has demanded of his students.

“There are lots of people who have great amounts of talents that go wasted,” he said.

The students were impressed. And the once difficult student began to put effort into his artwork. Then, a student asked him, ” ‘Well, if you kept this up for a year, what do you think you would do?’ I said, ‘Well, I don’t know. Maybe a thousand drawings.’ And it seemed as soon as I got back from the trip, a colleague came up and said, ‘Oh, I understand you’re doing a thousand drawings.’ I said, “Yes, yes, I am.”

In 1995, Nimmer met his self-imposed challenge. He had created one thousand drawings in one year. Some were excellent and some were not his best work, but he kept all of them. “And it’s probably a real pivotal time in both my artistic career and in my teaching career. One of the classes that came directly from that was a course called ‘One Hundred Drawings’ where every student had to do [one hundred drawings] – actually it should have been called ‘Two Hundred Drawings’ because they had to do one hundred in class and a hundred for homework during the semester. That’s still a very popular class at Mass. Art,” he said.

His one thousand drawings accomplishment led to art shows. “The first one was at the Milwaukee Institute of Art, where I showed the full thousand drawing collection. And that led to other shows that had turn outs throughout the United States, Japan, Ireland, China, Australia. I think the fascination was the process of creating.”

Nimmer has exhibited between one hundred to one thousand drawings in various art shows. With such a vast amount of work displayed, Nimmer said the emphasis becomes more on an overview of the process of creative thinking than about what an individual is or the quality of the singular works.

While his works can be termed abstract art, Nimmer calls them “intuition” art, a term developed when he was asked to teach a class in Beijing, China.

“The word ‘intuition’ really came from an interesting place,” he said. “I had the opportunity to teach at the Central Academy of China in Beijing. I was actually invited to show my work there. Faculty from that university had seen my work at a previous exhibition. I exhibited in Beijing in 1998 and subsequently two other times and put up about five hundred or so drawings. And when the students in particular saw the work I was doing, they were so interested in it, they asked me if I could come and teach workshops in Beijing, and I gladly accepted the invitation. The faculty said, ‘Yes, we would like you to do this.'”

Nimmer had previously thought about his artwork in conventional terms, using the words “abstract art” as “just a convenient catch all term.” But the faculty at Central Academy of China explained there are no words in the Chinese language for the term “abstract art.” They asked if the class Nimmer was to teach could be called “Intuition Painting,” he said.

“And that was a eureka for me,” he said. “Not only can you call the class that, that’s in fact much what it is that I do.”

Nimmer doesn’t use the term “intuition” to simply mean the artist’s internal subconscious self, as traditionally assumed. But, he believes there are unconventional paths that “kind of forces you to use that power of intuition.”

This type of intuition painting can be acknowledged when you paint blindfolded, paint your shadow, or try to render a moving figure or object, as found in his book, Art from Intuition.

He said, “If you can’t see what you’re doing, you have to rely on your instincts to move the color around.”

In Nimmer’s artistic world, the point of painting isn’t simply to make a picture of something. It’s to explore what comes out from your creative act and, again, as opposed to thinking of what [you] do as abstract art,” Nimmer said. “Each one of these [paintings] is an expression of my internal psyche. And every piece that I do begins from a blank page and then more than anything I allow the material that I work with – if I’m working with charcoal or if I’m working with acrylics or combinations of printmaking or others, like I let them tell me what to do or where to go.”

The way Nimmer creates an artwork can be compared to meditation. It’s not a trance like state, but a meditating state. “You’re not self-conscious and you’re not conscious of the idea of, again, what is it that I’m trying to make? Where do I want this to go. But allowing yourself to be led by the process itself,” he explained.

At any given artistic moment, Nimmer paints from three to six different paintings.

Most of the work is on an “intimate scale.” Their sizes are usually about 11″ x 15″ with unusual proportions. “That’s my window, my interim self,” he said. .” ..I’ve searched through a lot of different rectangular formats to find, I think, all artists have a window.”

He admits that sometimes he varies from that window, going either to a smaller or a larger scale.

He likes to develop a rhythm of the process. Making drawings or paintings on paper is a lot like sculpting as much as they are conventional paintings, he said.

“Again, it goes to that idea of finding something within the paper…And rather than dreading a blank piece of paper, I’d look at it as an opportunity to really find something that I didn’t know was there,” Nimmer said.

He uses materials found in places where he has traveled. For example, some of his collage pieces such as interesting calligraphy pieces and work were found at a flea market in China. Nimmer uses a mixture of things: inks, watercolors, pastels, charcoal, and printing inks. He often creates monotypes, which are one of a kind paintings/drawings.

Nimmer assigns an individual name to a painting only when a person asks him the name of that painting.

“And when I got into doing one thousand drawings, that was too ridiculous, too. I figured out when I was into 150 drawings that I better start numbering these, and dating them. That first series was in 1995, and I’m not doing one thousand drawings a year by now. But all of those boxes [over there], for example, have 130 in each box and there’s, my guess, three thousand,” he said.

For Nimmer, the significance of his thousand drawings is that he wants to see what he accomplishes in a lifetime, not so much by counting them but by seeing.

“By not knowing what I’m going to make when I start, what’s going to happen, where is it going to go makes [the process] more of a challenge and an interest,” he said.

Nimmer doesn’t set deadlines for himself with his art, only when the deadline is set by having an exhibition or galleries coming to look at his work.

He has some shows coming up in the Boston area in the next few months, one being at the Nobles & Grenough School in Weston, Massachusetts, in October 2008.