Tony Award winning actress Anika Noni Rose, who recently made history by being cast as the first-ever African-American princess in Disney’s The Princess and the Frog, has signed on to host the new season of AfroPoP: The Ultimate Cultural Exchange. An innovative documentary series on contemporary life, art and pop culture in the African Diaspora, AfroPoP’s second season comes to public television in October 2009. The series is produced by the National Black Programming Consortium (NBPC), and co-presented by American Public Television (APT).

As the series host, Rose will introduce audiences to powerful stories about African boxers who journey across the Atlantic to match their skills against the best in global contests; a teenage girl who travels to Ghana and a Sierre Leonian ex-patriate who returns to his homeland, each hoping to dispel prevailing myths about the two continents; and, Hurricane Katrina victims who find themselves refugees in their own country.

In announcing Rose’s hosting role on AfroPoP, NBPC Executive Director Jacquie Jones explained: “Anika’s body of work reflects not only a strong connection to the African-American experience, but her recent work in Africa shows she shares a link to and insightful understanding of Black life in other parts of the world. At the same time, we were looking for a youthful voice who could express the great breadth of the Diaspora. She is a perfect fit for the series.”

Film audiences will be reunited with Rose in November when she plays “Princess Tiana” in the animated, Disney musical feature opening in November. Her other recent acclaimed roles include secretary “Makutsi” in Anthony Minghella’s HBO series The No. 1 Ladies’ Detective Agency, “Lorrell Robinson” in the major motion picture Dreamgirls, and “Maggie” in the all-black cast of Cat On A Hot Tin Roof on Broadway. Rose won a Tony Award for her performance in Caroline, or Change.

To preview the series or for more information on the films or filmmakers, visit www.AfroPoP.tv.

Boxing is show business with blood-a tough sport, which has always found its top competitors from the poorest neighborhoods. Bukom, a tiny district in Ghana’s capital city of Accra, is one such locale. Grounded in a long cultural tradition of wrestling that over the years developed into boxing, the tiny fishing village trains young people to fight-and win. Bukom has produced up to five percent of the world’s champion and Olympic medal boxers. The Fighting Spirit tells the story of three fighters from Bukom-two men and a woman-as they battle their way to the glittering rings of Europe and America to compete for the biggest prizes in the business. Viewers watch the athletes fight for respect and reward for their tribe and their home, and witness their triumphs and defeats in and out of the ring. 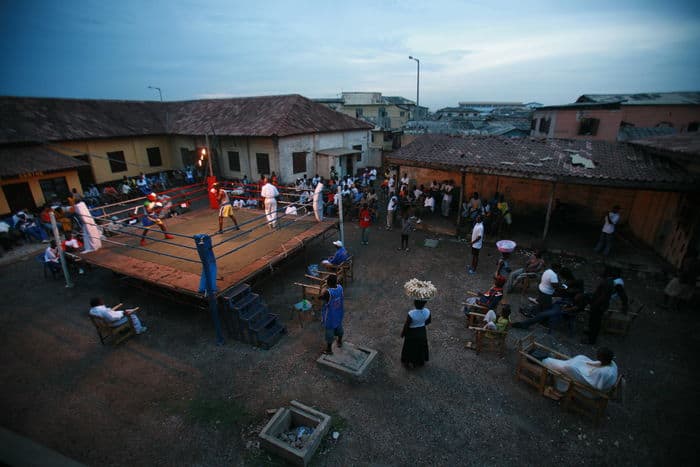 Living in a housing project in Atlanta, Georgia, 17-year-old Sylvia Dorsey is frustrated by the drug abuse and violence that surrounds her. Black To Our Roots is the inspirational story of the journey Sylvia takes to explore her ancestral home in Ghana in an attempt to escape the cycle of violence and poverty of her Atlanta neighborhood. In Africa, Sylvia confronts several challenges that test her patience and change her life forever. When she returns to the United States, will she be able to adjust to her old world as a new woman? This film is a testament to the power of change.

In the wake of one of the worst natural and humanitarian disasters ever to visit American shores, nearly 600 African Americans were airlifted to the almost entirely white state of Utah – without their knowledge. Desert Bayou seeks to examine whether two cultures can come together in a time of utter chaos, or whether their differences prove too great a challenge to overcome. In their own words evacuees of Hurricane Katrina, tell how they survived the storm of the century and out of the rubble ended up at a military installation in the deserts of Utah. With interviews from evacuees, political, military and religious leaders, community and social figures, the questions of race, politics and religion hurtle towards each other in this truly American story: a story of loss and reunion, of sorrow and rebirth, of anger and rejoicing, but most of all – a story of hope.

Moving to the Beat explores how youth in Africa and America are using hip hop music to communicate with one another and as a language for social change. The documentary follows Rebel Soulz, a hip hop group from Portland, Oregon, as they journey to Freetown, Sierra Leone to bring the radical roots of American hip hop to the motherland of Africa. In the process of collaborating and interacting with the local artists, the visitors confront their own stereotypes and fantasies of Africa while shattering the Sierra Leoneans perception of America as a “second heaven.” The result is a deeply forged connection that transcends centuries of misunderstanding and separation, and becomes an inspiring call for people worldwide to transcend boundaries.