Hello Gunnar, I’m glad that I had the opportunity to talk with you. Please tell me about yourself.

I was born in Reykjavik, Iceland. At the age of five my family moved us to a small-town on the coast of Maine. Then we moved to Austin, Texas, where I attended high school. After graduation I attended the University of Texas.

Where did inspiration come from when you decided you wanted to be an actor/writer?

I really didn’t plan to become an actor or get involved with films, but during the summer of 1973, I found out that some filmmakers in Austin, Texas, were planning to make a horror film titled “Leatherface” (which later became “The Texas Chainsaw Massacre”), and they were looking for someone to act as the killer. I tried out and got the part.

Regarding the soon to be released horror film “Reykjavik Whale Watching Massacre,” what is your role in the film and can you tell me a little about the film?

I play Captain Petur, who has a converted fishing trawler that takes people on low-budget whale watching trips. During the trip no one is seeing any whales. When we get into trouble, a rescue boat finally arrives and everyone is moved to another ship where things begin to go awry and the horror begins. 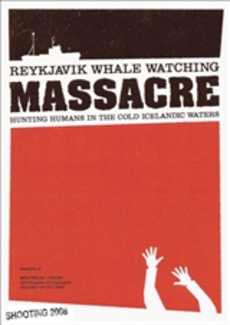 Is there a tentative release date and where will it premiere?

The film will premieres on September 3rd, 2009, in Reykjavik, Iceland. http://www.kisi.is/

Will RWWN be submitted to any film festivals?

Yes, that is a possibility in the near future. I am hoping it will play in several festivals in the US as well.

One more question: what do you like to do in your spare time?

I enjoy photography and sailing. I also write screenplays and books. One of my books is titled “Islands at the Edge of Time,” available at Amazon.com.

I would like to thank Gunnar for taking the time to speak with me and best wishes on RWWM and his other projects.

Gunnar has also just finished a role in a film called “Won Ton Baby” where he played Dr. Kurt Severson.

For more information on Gunnar and his craft go to: