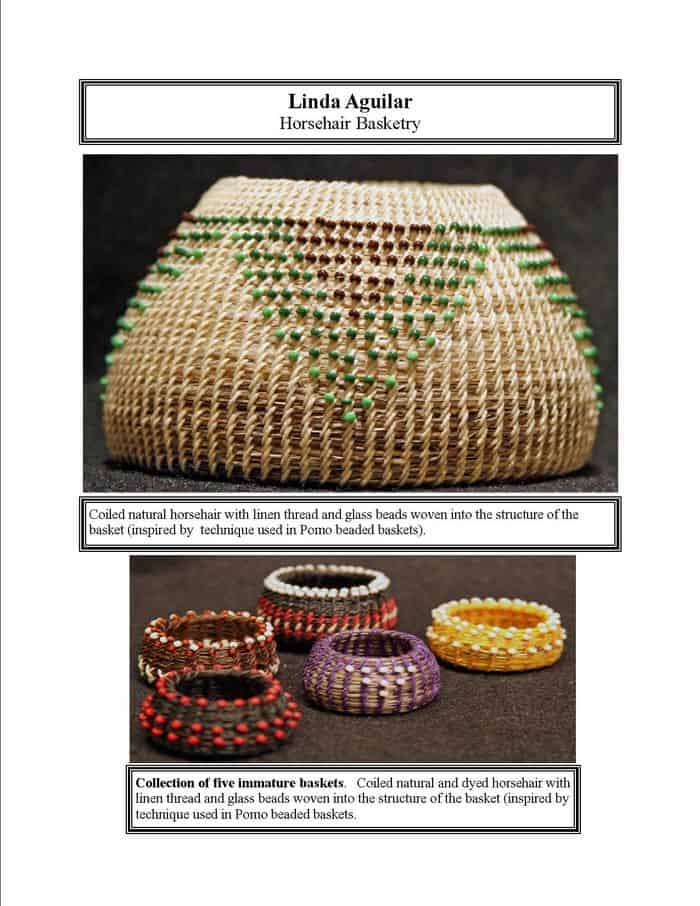 Aguilar’s reputation as an artist is such that; a basket of hers was added to the permanent collection of outstanding examples of contemporary art in the Renwick Gallery of the National Museum of American Art, Smithsonian Institution, Washington D.C. as part of their 25th Anniversary celebration. Pacific Western Traders was instrumental in placing the basket in that collection.

Her baskets have also been shown at the Southwest Museum in Los Angeles, The Stagecoach Museum at Newbury Park, CA (they have over 100 in their permanent collection), as well as many others around the world. When Nelson Mandela of South Africa visited Los Angeles, Mayor Tom Bradley presented him with one of Aguilar’s baskets; as well, The Dalai Lama has been presented with her baskets. Aguilar has won over 50 “first place” or “best of show.” 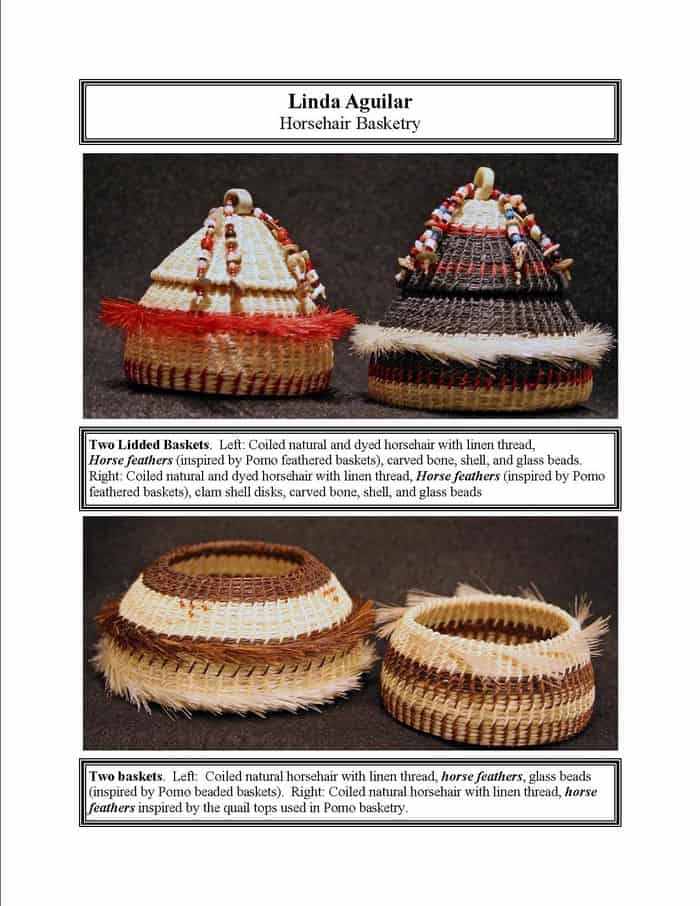 Aguilar is best known for her tightly coiled horsehair baskets decorated with shells, beads, and other materials she “picks up and stores in her pockets.” The Chumash people did not traditionally make horsehair baskets. Traditional Chumash baskets were made from deer grass and juncus grass. The making of horsehair baskets has evolved over the last two centuries. Aguilar is an expert in traditional basketry as well. She was a featured artist in the video A Treasure of California Baskets by Gregory Schaaf, PhD.

Aguilar was taught to weave at an early age, and it is as much a part of her life as walking and talking. The truth is she does not remember how or when she learned to weave. It is something she has always done. “A lot of people say I was spirit taught,” she says. She is what native people would call a “contrary” or clown. Frequently getting her inspiration from dreams, as a contrary she infuses a sense of humor into work and avoids negative influences. Aguilar refuses to watch anything but comedy or love stories on television whilst weaving. As well, she will not weave if she is sad or upset, lest she weave unhappiness into the basket.

Aguilar says, “My weaving is a meditation for life. It helps me see and understand how everything is connected to each other. When I collect my materials to make a basket, I notice pollution and the weather… The art is connected to the material and my physical being – the faster I try to go, the longer it seems to take me. I simply have to be in a peaceful state of mind and let the spirits and the art take over.”

There is an exhibit of her new baskets, featuring a Story Teller basket; inspired by the Story Tellers (a seated pottery figure with many children sitting on her lap) of the Pueblo Natives in New Mexico. She has taken her basketry in an impressive new direction, with new shapes; extending the neck of her shouldered baskets, the use of beads very much in the tradition of the Pomo and her use of “horse feathers,” reflecting the same tradition. In addition there is a new collection of lidded and miniature baskets

Linda Aguilar has been represented by Pacific Western Traders since 1993 and participates in our Seasonal Markets.

Pacific Western Traders is located at 305 Wool Street in the Historic District of Folsom, CA. Open Wednesday through Sunday 10:00 to 5:00.