The documentary explores the causes that destroyed the one civilization of pluralism and interfaith cooperation that for a few centuries lit the Dark Ages of Medieval Europe.

Now, over a thousand years later, issues of religious intolerance continue to divide nations. This film serves as an example of both the glories of a multicultural society and the tensions that arise when one religious or political faction tries to force their ideas onto the society as a whole.

With the sixth anniversary of Sept. 11 around the corner, the topic of interfaith seems appropriate and Cities of Light will be able to raise the issue of interfaith relationships. In essence America is what Islamic Spain was – a country built on diversity. Since Sept. 11, 2001, has this country changed its attitude – is anti-Muslim sentiment getting worse? What is the relationship between East and West today? Are we more alike than we think?

CITIES OF LIGHT: THE RISE AND FALL OF ISLAMIC SPAIN 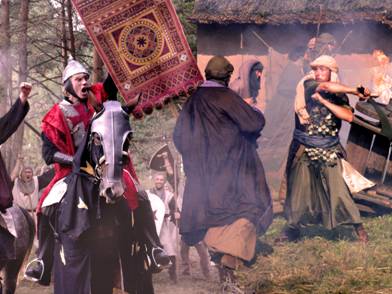 A Dramatic Portrayal of a Period in World History

Over a thousand years ago, the sun-washed lands of Southern Spain were home to Muslims, Christians and Jews living together and flourishing. Their culture and beliefs intertwined, and the knowledge of the ancients was gathered and reborn. Here were the very seeds of the Renaissance. But this world too quickly vanished. Greed, fear and intolerance swept it away. Puritanical judgments and absolutism snuffed out the light of learning. Within a few centuries the fragile union of these people dissipated like smoke and the time of tolerance was lost forever. Brought to life by powerful feature-film style re-creations Cities of Light: The Rise and Fall of Islamic Spain explores the causes that destroyed the one civilization of pluralism and interfaith cooperation that for a few centuries lit the Dark Ages in Medieval Europe.

– Lourdes Maria Alvarez – Director of the Center for Catalan Studies and a professor of Spanish at Catholic University in Washington, DC.

– Brian Catlos -Associate Professor of history at the University of California, Santa Cruz.

– D. Fairchild Ruggles – Associate Professor in the Department of Landscape Architecture at the University of Illinois at Urbana-Champaign.

– Mustapha Kamal – Currently a lecturer in Arabic, Department of Classics and Mediterranean Studies, at the University of Illinois at Chicago where he focuses on instruction of Arabic language and literature.

Unity Productions Foundation (UPF) is a non-profit educational foundation working to promote peace and understanding through the media. UPF’s first project was Muhammad: Legacy of a Prophet, which aired nationally on PBS on December 18, 2002 and was awarded a 2004 Cine Award for Best Professional Documentary in its category.

Unity Production’s mission is to create documentaries, feature films and educational products that can contribute to ending the clash of civilizations.