Welcome Julie, tell me something about yourself?

I’m from Southwest Florida and I moved here for grad school and the music scene. When I landed the Brooks and Dunn gig, I postponed school…indefinitely.

When did you become involved in singing?

Like a lot of singers, I grew up performing in church. It’s crazy how much you learn from your choir teacher and don’t even realize.

Where there any artists in particular that inspired you?

You know, my passion is songwriting more so than performing so I’ve always been inspired by artists who are also great writers-Tom Petty, Patty Griffin, Rob Thomas. 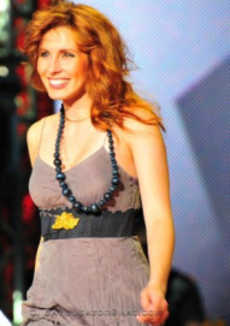 How long have you been a background vocalist for Brooks and Dunn?

I’ve been touring with Brooks & Dunn for 5 years now and it’s been an incredible ride. They are two of the best guys I know and they make it so easy to forget its work and they’re your bosses because they treat us more like family.

Do you have any future projects?

Absolutely. As my own artist, I’ve found myself settling into the niche of TV/film placement. Instead of going on the road, pursing radio airplay, etc., I submit my songs for shows, commercials and movies. Of course, I’m still on the road with the guys, but will hopefully be able to write and record full time when we stop touring.

Would you happen to have a web site where folks can read more about you?

Yes, I have two! www.juliedowns.com and

One last question; your favorite vocalist?

Aretha Franklin-Arguably the greatest singer ever

Mac Powell (Third Day)-Something about the tone of his voice makes me believe every word.

Jake Owen-The texture of his voice is so smooth with just a touch of southern making it that much sexier.

Justin Timberlake-He’s the MJ of my day-crazy talented with a huge range.

Julie, thank you so much for the interview and keep up the great work. Hope to catch you on the road sometime.

Denise has freelanced in News and television production in Los Angeles and New York. She is popular with actors, actresses, directors, musicians and writers, because of her thoughtful, in-depth interviewing style. Contact Denise through NewsBlaze.