“Highland beauty Catriona Kincaid cares nothing for propriety-or even her own safety-when she storms the grounds of Newgate Prison. Determined to return to Scotland and restore her clan’s honor, she seeks the help of Sir Simon Wescott, a disgraced nobleman and notorious rogue. She is prepared to offer him both wealth and freedom, but she never dreams the wicked rake will be bold enough to demand a far more sensual prize.

Simon is shocked to discover the tomboy he met long ago has blossomed into a headstrong temptress. Although he’s sworn off his dreams of becoming a hero, he can’t resist playing knight errant to Catriona’s damsel in distress. Both adventure and peril await them at her Highland home, where they will risk their lives to vanquish her enemies . . . and risk their hearts to discover a passion beyond their wildest dreams.”

Catriona has loved Simon since she was a teenager, which is why she seeks him out years later. She needs to return to Scotland to find her long lost brother, Connor. The reader finds out that Connor sent his younger sister to their uncle after tragically losing their parents. Connor remained in Scotland, while Catriona grew up feeling isolated and alone, cut off from everything she knew and loved. Though this story is supposed to be about Catriona and Simon finding each other again and falling in love, I got more caught up in wondering where Connor was. His last letter to his sister was three years earlier, and she doesn’t find him when returning home. So where is he? 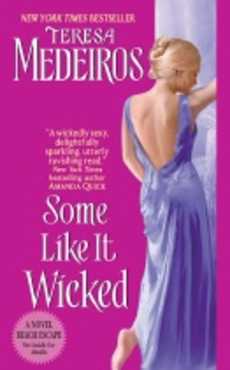 The story itself was written in classic Medeiros fashion, easy to read and entertaining. Teresa always writes with a hint of humor, and there are several laugh out loud moments. After trying to shock Catriona by comparing himself to a dashing and accomplished lover in a randy book, she counters with her own remark from her more puritan novel:

“There’s a character in there based on you in that book as well. They call him Satan.”

There is also sexual humor, which is refreshing. It feels good to laugh as you read a romance novel. Catriona is asleep with her head in Simon’s lap while they ride in a carriage on a bumpy road. He is uncomfortable due to his sexual attraction for her.

“If she kept rubbing him in that maddening manner, it wouldn’t be any different than resting her head on a rock.”

Though there are a few uncomfortable moments in the novel. There are times that Catriona acts too innocent and juvenile, and other times that Simon’s inability to let go of the past is aggravating and irritating. There wasn’t as much action as I would have liked, nor enough intimacy, a lot of which happens after the scene is over. Being able to read about it is the best part. We’re built up thinking there will be a final battle between the Kincaid clan and the British, but it fizzles out quickly and all is resolved – but what about Connor? We’re still left wondering what happened to him. Ms. Medeiros finally gets to him on the last page in the last sentence, only to let the reader know that he is to be hanged. I could only stare in shock as I realized the story would be continued in another book. Great way to get us to buy another one, Teresa! Of course, I’ll be reading Some Like it Wild, since I’m actually more interested in reading Connor’s story than I was in reading Catriona’s. Still, I enjoyed it, as I always enjoy Ms. Medeiros’ novels. She is the only author I will buy regardless of the plot, and I’ve never been disappointed.

On a more personal note I would like to add that Teresa is a very personable lady. She will respond to emails that you send her, and now she is on twitter and will reply to you when you ask her a question. It is truly nice that she seems to enjoy interacting with her fans. This author should be a must read on anyone’s book list.