“Picking Cotton” is about an identification of a rapist where all the information was wrong and an innocent man went to prison for a crime he did not commit. Ronald Cotton served 11 years in prison after a jury trial found him guilty. All that time, he maintained his innocence, but no one set him free.

The story is very compelling as the victim, Jennifer Thomson-Cannino remained positive in her identification of the rapist. She always felt he was the man and all during this time tried to keep in her memory his features, his actions, because someday she knew she would have to tell what happened to the police and the court system. Positive in her accusation, Jennifer never wavered. She was always convinced that Ronald Cotton was the man who should be in prison. 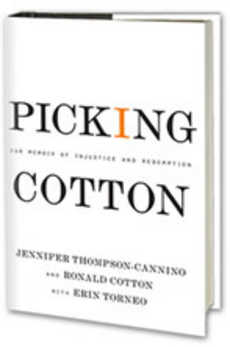 Eyewitness identification is very important in the solving of crimes. However, those who identify are not always right. In Cotton’s case, a collaborating witness said he was the person who raped her, but that was only after Jennifer had made her ID.

When an attorney who represented Cotton in his appeals produced evidence freeing him, Jennifer Thompson-Cannino became terrified he would come after her for revenge. However, the rest of this book, which takes place after Cotton’s release, is what makes this story unusual.

DNA testing became more sophisticated during the years of Cotton’s imprisonment and subsequently changed the lives of many inmates. Testing 10 years before his incarceration was not reliable and yet the courts placed huge reliance on the results. Many paternity cases resulted in child support paid by presumed fathers based on weak evidence. Legislatures in their greater wisdom passed laws that compensated inmates for wrongful imprisonment in an effort to correct the injustices. However, in Cotton’s case, he received less money for his years served, as it was not until later on that the amount was greater.

Ronald and Jennifer became friends after a meeting in which they both realized that mistakes changed both of their lives. After several meetings both came to the same conclusion, they would take their story to the public and do the best they could in helping others who had been wrongfully charged. Since the publication of this book, Jennifer and Ronald make appearances enlightening audiences on the frailties of justice system. They both want to put an end to wrongful accusations and incarcerations.

This is a five star book is a necessary read for those who are in the justice system, those victims of a crime, or the alleged perpetrator wanting to be set free.

By Jennifer Thompson-Cannino and Ronald Cotton with Erin Torneo