There are times when a reader buys a book solely from a glowing review. That is the case with Denis Sheehan’s self-published book, A Nobody’s Nothings. Crystal Adkins, the same reviewer who gave Faith’s Portrait a five star review, also gave his book a five star review. Personally feeling she must know great writing, $10 was mailed to Bone Print Press.

It is hard to review this book, which is more like a diary of a mad man then either a novel or an autobiography. The following disclaimer is printed on the first page:

If you’re my mother or an aunt, please stop reading.

If you’re an English teacher, break out your red pen.

If you’re the sensitive type who is easily offended, put

This is fair warning for everyone. The author clearly feels that if there is the slightest chance readers won’t like his book, then there is something wrong with them. I think he has that backwards. This book won’t appeal to most people. It’s still puzzling what Crystal liked so much about A Nobody’s Nothings. Wondering what could be so funny about the Invisible Man with crabs, I could only stare in puzzlement at a blank piece of paper with a bunch of dots near the center. This was supposed to be hysterically funny?

After struggling through a book with horrendous typos and no page numbers, it is obvious that Sheehan does have some writing ability. There were a few fictional short stories that were quite interesting. Unfortunately, those are few and far between, and the rest is littered with unnecessarily gross meanderings of his life. Whether or not these recollections are true is moot though, since nothing in the book is memorable…at least in a pleasant way. 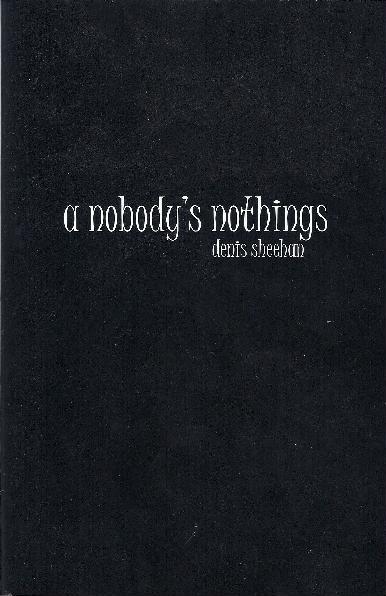 Taking a chance on offending readers of this review, pasted below are a few quick snippets of his overly detailed grossness. Keep in mind that it’s not the worst, just not too gross to repeat online. Please note that any typos are his, not mine.

Suddenly, the vomit came rushing and for some reason, I couldn’t throw in the toilet and disrupt the bloody masterpiece. Instead, I splashed it down into the bathtub where it exploded upon impact and covered most of the tub’s bottom. I think I even saw a small bug succumb to the vomit tidal wave. I gave it three or four heaves, took a breath, and hacked up some spit to finish the puking session. I spit hard and watched it hit the puke making a small crater. The spit spread apart the vomit and revealed the tub’s white porcelain.

And near the end of the book is his masterpiece:

Seconds later, the girl violently vomited onto the toilet, floor, my lower body and feet. She obviously saw the reason behind the putrid stink. Sitting in the toilet was my morning’s handy work that had been harmlessly floating there for about fifteen hours until the urine stream broke its shell and released its inner smell and gases. I had forgotten to flush.

The combined smell of the unflushed turd and the vomit merged with the sickening, yet comforting warmth, sensation of the puke on my body and squishing beneath my feet and between my toes caused everything my stomach to exit. I vomited, hard. Its target was the back of the poor girl’s head, shoulders and back.

Both of the above scenes were either before or after sex. It seems strange how often this man vomits, or that the instances were so profound that he felt the need to write about them. There might actually be people who enjoy reading toilet humor, but this reviewer is certainly not one of them. Though this type of crudity isn’t humorous, it really wasn’t offensive either, at least to me. It was just pointless. That is actually the best way to describe the whole book: pointless. Mr. Sheehan should stick with writing fictional stories and poetry. At least that is this reviewer’s opinion.

A Nobody’s Nothings by Denis Sheehan