A man from Springfield, Virginia (Eric Williamson, 29) was making some coffee in his kitchen whilst naked, and faces a possible charge of indecent exposure and a year in prison.

It was 5:30am and he had the house to himself. He decided to go into the kitchen to make a coffee. Like many other millions on the planet, he felt there was nothing wrong in being naked in his own house, especially at that time of the day.

Mr. Williamson claims that he did not purposely intend to expose himself to anyone outside of the house, but at that moment a woman and her seven-year-old son happened to pass by his kitchen window.

After seeing Mr. Williamson’s naked body, she called the police!

What many reports have failed to mention, is that the woman was in a hurry and cut across Mr. Williamson’s garden to save time. Apart from the fact that she was trespassing, why on earth was she out so early with her son? 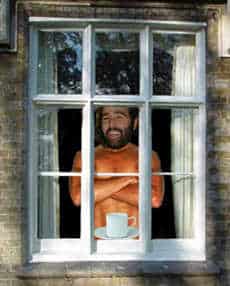 Had she not taken the “short cut,” she probably would not have seen Mr. Williamson, and if she was in such a hurry, what was she doing looking in any windows at all?

It is uncertain whether such incidents truly shock members of the public in the US, but in Britain an event like this would produce little or no response, and certainly wouldn’t warrant a call to the police.

What can we expect next? Will burglars breaking into someone’s home be able to complain, if witnessing a married couple having sex? My God! Has the woman and her son never seen a naked man before?

Perhaps the police should charge the woman for trespassing, and if her son was traumatized in some way, blame her for that too (seeing as she took him in an area that she shouldn’t have done).

Maybe we should take this as a warning? Make sure you at least wear some pajamas in the future, because you never know when someone might see you through their telescope, penetrating the small gap you accidentally left in the curtains. Crazy!