Terrorist organizations have infiltrated the American media and landed their agents in private companies. Fortunately, there is Fox News and Michelle Malkin that undauntedly have traced one spook and blocked her further appearance. Dunkin’ Donuts will promote Islamist extremism no more.

At first glance the Dunkin’ Donuts online commercial looks innocent. Rachael Ray, a television celebrity and an acclaimed writer, drinks an iced coffee and smiles broadly to potential customers. In the background we can see the cloudless sky that contrasts with beautiful trees and a lush green lawn. Ray’s clothes are also spotless except for one small detail that could be left unnoticed by an ordinary viewer but the careful eye of Michelle Malkin spotted it at once.

The Islamist radical aka Rachael Ray was given away by a black-and-white scarf. What any fashion designer would call a classy addition to the actress’s tasteful outfit, hard-core conservatives took for a dangerous tool that promoted terrorism. Much like Osama bin Laden’s videos or the Iranian President’s hate speeches, also the Dunkin’ Donuts commercial conveyed the message that even at home Americans could not feel safe. 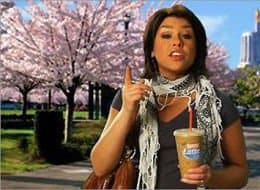 The scarf that resembled a kaffiyeh – a traditional piece of clothing worn in Palestine and other Arab states – epitomized everything that the Bush Administration had been fighting against. The scarf, commented Malkin, “has come to symbolize murderous Palestinian jihad. Popularized by Yasser Arafat and a regular adornment of Muslim terrorists appearing in beheading and hostage-taking videos, the apparel has been mainstreamed by both ignorant (and not-so-ignorant) fashion designers, celebrities, and left-wing icons.”

According to the American Heritage of the English Language, kaffiyeh is “a cloth headdress fastened by a brand around the crown and usually worn by Arab men.” The scarf has become widely popular in Europe where it first arrived with hundreds of thousands of Arab immigrants who moved to the old continent in the second half of the twentieth century. Contrary to its original use, it is now often worn by women.

Although Dunkin’ Donut said that “absolutely no symbolism was intended,” the company was forced to pull the commercial. Quoted by Fox News, Michelle Malkin applauded the decision saying that “it’s refreshing to see an American company show sensitivity to the concerns of Americans opposed to Islamic jihad and its apologists.”

Why not go further? Perhaps we should forbid Arabs wear their traditional robes since also Osama bin Laden and his ilk have used them in their videos. Communists are also still strong so maybe it would not be a bad idea to issue a ban on red shoes and clothes since they may promote Marxist ideals. Let’s not forget about white color – after all, the pope’s outfits are usually white and the last thing the United States needs is the invasion of papists.

As a conservative I agree that certain apparel should be prohibited. For example, I am against t-shirts with Che Guevara that not only flood college campuses in the United States but also appear in those parts of the world that know what it means to be enslaved by a communist regime. Also those who have anti-American inscriptions on their outfits should be prosecuted and put behind bars, if necessary.

But if we forbid people to wear their traditional outfits, won’t we become like Islamist radicals? Al Qaeda and other terrorist organizations have waged war on the Western Civilization because they find our clothes and customs deplorable by their standards. Once we cross the thin line between the good and evil, it will be very difficult to come back.