Back in the late 1990s, in the days of the first dotcom boom, I visited New York for the first time in my life. The city was an overwhelming place, and even coming from crowded London, presented somewhat of a culture shock.

My $30 youth hostel on Amsterdam Avenue, just north of West 130th Street, was all my small budget could afford and, strapped for cash to do anything else, I spent most of my week in the city walking the streets – snapping pictures with my newly bought digital camera, before smartphones made even those obsolete.

Wandering south and far I found myself on West 47th Street, between Fifth and Sixth Avenue, in one of Manhattan’s teeming districts. There, lost, I was dazzled by jewelry shops packed tight together. 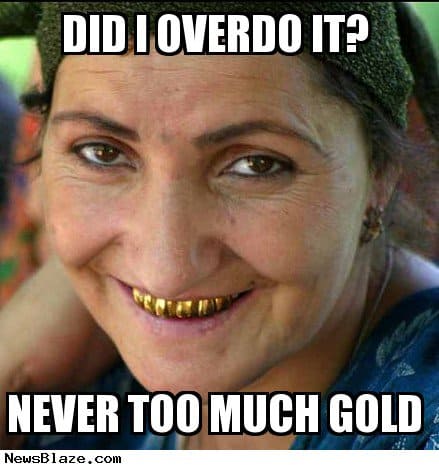 This was New York’s Diamond District, and in the windows of these shops, alongside diamond rings and pearl necklaces, were rows and rows of gold teeth. This was one of the more curious cultural idiosyncrasies of the city – the wearing of gold teeth in place of your own as an overt display of wealth.

Long before rapper 50 Cent made his gold “grills” an icon, here in Manhattan, among the projects and ghettos, poor and rich New Yorkers alike were investing in dental gold, to add a touch of “bling” to their mouths.

These were the days when the price of gold was yet to skyrocket, the financial crisis of 2008 still a decade away; and what I saw in Manhattan towards the end of the last century became the height of pop-fashion in the years to come.

But now, with unemployment still rampant, industry in retreat and gold price at record heights, those who invested in dental gold years ago must be wondering what their mouths are now worth.

Cash in on your smile

You’d be surprised to know that among the gold traders that still line Manhattan’s Diamond District, are specialist dental gold buyers who are looking for valuable scrap gold they can buy and have melted down to be reused.

These gold buyers run their own stores and allow you to mail in your precious metal for instant cash. In a curious reversal of cultural trends, mouths that once gleamed yellow are now being emptied of their value.

Dave Crume, president of the National Pawnbrokers Association, says, “I’ve seen [people] pop the gold right out of their mouth. It’s a little awkward, but I’ve seen them take out a tooth.”

If walking in and popping out your gold tooth seems a little too awkward, you can always have it removed by a dentist before seeking out a gold buyer. Of course, you have to know that your teeth are valuable first.

And that’s where the difficulty lies. Unless you had the karat quantity assessed and the amount of gold used valued before you had the teeth put in, how do you know what they’re worth?

How much your old bridge or crown is worth depends largely on the current gold price. That however is around $1,360.60 per ounce, which is a huge jump from the 2008 pre financial crisis price of $920 an ounce. And that’s higher still than the 1998 average of $300 per ounce. For many who indulged in the opulence of dental gold, back when it was still fashionable, selling their artificial teeth will still be a remarkable profit, no matter what.

However, back in 2011, the price of gold reached a peak of $1,900 per ounce, a good $540 higher than what it is today. That mini crash in gold prices signals a nervy time for gold dealers and those waiting to cash in on the gold in their teeth risk diminishing returns if they wait much longer.