The Chrysler Corporation hosted former Polish President Lech Walesa here as part of a showcase of improvements at the Jefferson North Assembly Plant.

The former labor leader had been in Chicago for a Nobel Peace Prize symposium that Jeep helped sponsor.

Chrysler is starting an advertising campaign featuring peace as the focul point.

After his appearances in Chicago, Walesa visited Detroit for a ‘meet and greet’ with Chrysler CEO Sergio Marchionne.

They both addressed about 120 employees and guests.

The Italian auto executive went on to praise Walesa for leading a nonviolent revolution.

Marchionne said, “It is not often in life that you get to spend time with someone who has played a vital role in changing the course of history.

Lech Walesa is one of those rare leaders who represent a true turning point in our collective life, for what he has done and for the way he has inspired the world.” 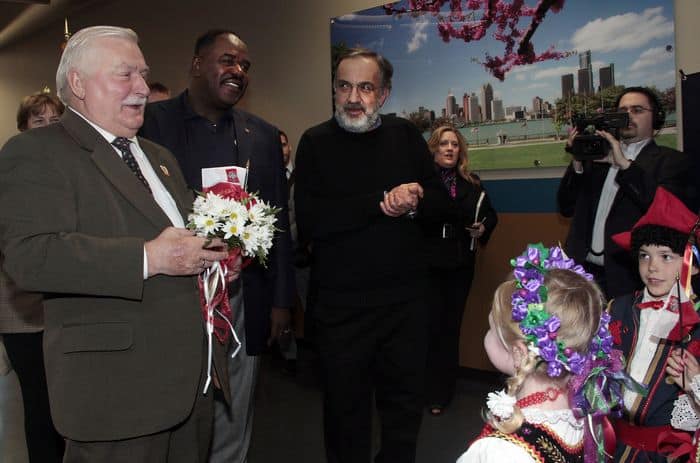 Marchionne talked briefly about Chrysler’s strong sales recently. He added, “Jefferson North has played a key role, not only in the resurgence of Chrysler sales but also in the cultural change that is transforming our entire company. A cultural change driven by personal commitment, sense of responsibility, respect for each other, and the awareness that we have the privilege to be the authors of our future, of a better future.”

Walesa said smiling and responding through an interpreter.

“If he’s not very good, then I’ll stay with you, and we’ll go on strike,” Stewart laughed and reassured the former Polish President.

“Sergio’s someone; he wants to work with the union, so this is a good step, being here.”

Walesa called on America to reclaim its place as the moral and political leader of the world. He also spoke about labor management partnerships.

He was harsh regarding pointing at business owners for unemployment in cities such as Detroit and called for creating more ownership among workforces. He added, “Perhaps workers should have to invest half their wages back into their companies.”

The former Polish President had the auto audience listening intently when he spoke of the fall of communism. Walesa said he had hoped that would be the end of the world’s problems. He added, “I thought that once communism was finished, the world would be happy.”

But he said many challenges remain, challenges he said the United States must help the world overcome. He mentioned with a smile regarding the help that some Detroit labor unions gave for the struggle of Polska Solidanosc.

Walesa praised Chrysler for working with the United Auto Workers to make Jefferson North a viable plant again. In January of 2012, the Chrysler Group announced that it would add a third crew or 1,100 jobs in the first quarter of 2013.