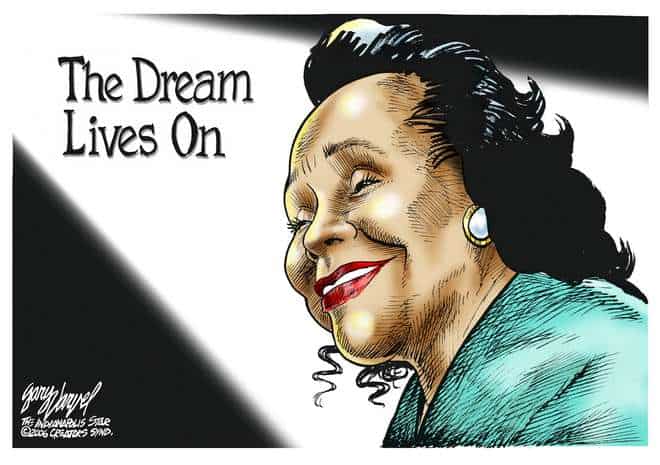 Just two months after the assassination of her husband in 1968, Graves escorted Mrs. King to the funeral of Sen. Robert F. Kennedy. Having worked as a staff member for the late senator throughout a year marred by struggle and tragedy, he witnessed first-hand Mrs. King’s courage and determination during one of our darkest times as a nation.

Although marked by enormous heartbreak, Mrs. King was a pillar of strength and dignity. Her resolve to persist in our nation’s struggle for racial equality – despite overwhelming adversity – will serve as an inspiration for generations. She was a remarkable woman, devoted to family, never wavering in her hope and belief that “the dream” may someday become a reality.

Mrs. King’s lifetime of accomplishments, including the Martin Luther King Jr. Center for Nonviolent Social Change and the federal King holiday in January, will continue to endure and provide both legacy and lesson for all those who follow in her footsteps. Our nation owes Mrs. King a sincere debt of gratitude. It would be a fitting tribute, by all who keep hope alive, to assist with her final wish – to complete fundraising and establish the King Memorial on the national mall in Washington, DC.

Offering his condolences to the King family, Graves said “My deepest sympathies go out to her four children and the entire King family.”

Earl G. Graves Sr. is a recognized authority on black business development and the founder and publisher of Black Enterprise magazine.