The biogas process breaks down food waste and other material that is normally dumped into landfill or is incinerated. Each year, Britain wastes around 18 million tonnes of food, which could produce enough biogas to supply over 700,000 homes.

The company says Green gas made using their process has the potential to generate as much as half of the UK’s domestic gas, given the right government backing. Ultimately, Ecotricity plans to create biogas using emerging next-generation technologies with special strains of naturally occurring, fast reproducing algae, a potentially endless resource. 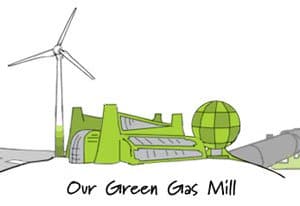 The usual model for energy producers is to mix energy generated from green and brown sources and then increase the green-sourced energy as more customers sign up and the company builds new renewable supplies. The UK average for green sources is 5%, but Ecotricity is a leader in this area, with 45%, with a goal to be 100% green, in the long term.

“People can now have complete control of where the money they spend on their energy bills goes, and ultimately where their energy will come from. Nobody has to carry on giving their money to the big multinational energy companies, who seem determined to keep burning whatever in the world they can get their hands on like there’s no tomorrow.

“By choosing green gas, customers can help unhook Britain from its addiction to foreign gas supplies, make a positive long-term change to the world we live in, and could also keep thousands of tonnes of waste out of landfill which could even help keep council tax bills down.”

In the US, energy companies typically charge a premium for green energy, but Ecotricity pledges to deliver green gas at no extra cost, matching British Gas on both its standard gas and dual-fuel price in each region.

Currently, 50% of Britain’s winter gas supplies are imported from overseas, including Russia and other foreign sources, but Britain is projected to become almost entirely dependent on foreign sources in coming decades, as North Sea supplies are exhausted.

Ecotricity is a privately owned, not-for-profit company with no share price and no shareholders or investors to keep happy, allowing it to pursue its mission of growing Britain’s new sources of green electricity.

Ecotricity invests an average of Pounds 450 per customer per year in new sources of green electricity, more than ten times that of its closest rival and more than all of its competitors combined. It now intends to apply its unique business model in the gas market, to change where Britain’s energy comes from forever.

Visit www.ecotricity.co.uk to learn more about this innovative company.