With English being the “international” language on our planet, it is perhaps natural that people in countries using English as their first language (like Britain, the United States, Australia, Canada etc.) are reluctant to learn other languages.

Whilst this might be acceptable for those taking a short holiday and mainly coming into contact with foreigners catering for tourists (who often speak a multitude of languages), it is less than acceptable when you wish to do business in that country.

When it comes to speaking in other tongues, most western countries languish at the bottom of the table and subsequently lessen their chances of succeeding in foreign lands (as far as business is concerned). 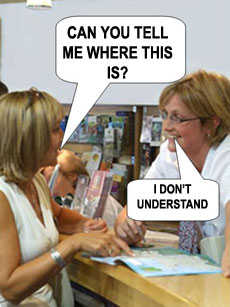 Apart from the obvious benefits of being able to speak the same language as your potential business partners, there is a lot of personal satisfaction in achieving this ability.

Learning a second language can also open up new job opportunities and the chance to travel to exciting new places (and earn a lot more money). Many of us perhaps regret not taking more interest in languages when we were at school and envy those who did, who (by now) have established themselves as international players. But it is never too late to start and many people tell me that more and more people are beginning their studies much later in life.

One of the added benefits of learning a language, is the knowledge you obtain about the culture of that country and your ability to ask questions for yourself. Wouldn’t it be wonderful if some of our politicians took a little more interest in the traditions they are so fond of criticizing in other countries, and try to understand the reason behind them?

It is of course great to see people learning certain phrases before they jet off to another country, but think how much nicer it would be to ask questions that go beyond the usual “Can you tell me where the supermarket is?”

By learning a new language you are taking the first step on an exciting new road, a step that will impress your friends and colleagues, gain the respect of the people who use that language, but perhaps most important of all, will be the pleasure you obtain from knowing that you can converse with people in a second language, without the help of a translator (who may not be available 24/7).