On February 2nd, AT&T introduced a new pricing plan for AT&T customers that have multiple phones or that need a lot of data, called the Mobile Share Plan. Depending on your setup, this could save you $50 – $100 a month. But with any deal that usually sounds too good to be true, there is some fine print that they don’t mention, unless you literally read the fine print or do some research.

For example: I currently pay $260 a month for 5 phone lines. 4 of the lines have 2 gigs of data each, 1 unlimited data (it was grandfathered in from the good old unlimited data days), unlimited texting and mobile to mobile calling. It also has 1400 anytime minutes with rollover minutes. That is plenty for us since most phones we call are mobile phones. 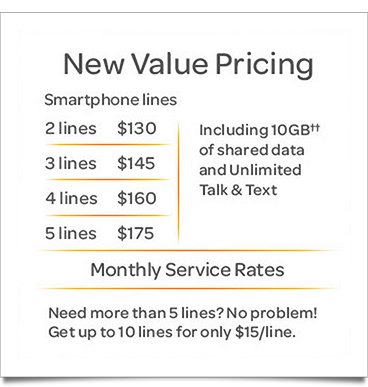 That sounds great, right? No, there are stipulations…

Under the Mobile Share Plan, if you want to upgrade your phone for a new one you would have to pay full price for it. The pros are you would not be under a 2 year contract, but there are cons. You can do another 2 year contract, but instead of you paying $15 a month for that line, AT&T will charge you $40 a month. When you eventually upgrade all 5 phones, you will be paying $275 a month ($40 x 5 = $200, then the $100 a month for the data minus $25 for the discount).

I have 3 teenagers, so between them wanting the latest and greatest phone when it comes out, or a phone accidentally being broken, upgrades are going to happen sooner or later.

AT&T does have a program called AT&T Next for upgrading your phone for the full price, which you can keep the $15 a month plan and they divide the payments for the phone out for the next 18 – 20 months. If you only have a few phones you are managing, this would not be bad, but if you have an entire family with phones, then it can get expensive.

Why is AT&T trying to push customers into this plan?

It gets those last few customers off of the unlimited data package they are grandfathered in, and customers will be paying full price for their new mobile phones instead of the subsidized pricing.

For some customers, this is a good deal, but for those customers with large families that wants new phones every few years, it’s not really a great bargain. The bad thing is in all of this, a lot of the customers that are switching to the new Mobile Share Plan do not realize that they lose their ability to purchase a phone at the substituted price unless they want to pay $40 a month for the line.