Just a month after announcing a doubling of its annual revenue, Anaplan CEO quits, leaving no replacement. Anaplan, the enterprise planning company with cloud-based software, is venture-backed.

In that previous announcement, the company said its continued growth was fueled by “global demand for its cloud-based planning and modelling platform.”

Anaplan has a big-name customer base, across a broad range of industries and markets, which is the reason for its doubling. In the past 12 months alone, new customers included CareerBuilder, Chevron, Dairy Farmers of America, GrubHub, Schneider Electric, Tata Steel, Ticket Monster, Zillow Group, and Gatwick Airport in the UK. 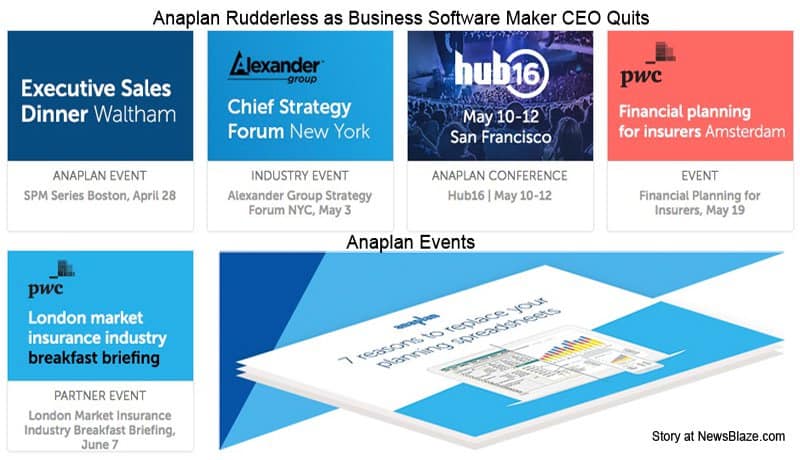 Fast Company and Gartner Group gave Anaplan kudos. Fast Company put Anaplan in the Top 10 Most Innovative Companies in Enterprise Software for 2016. Gartner put the company in their “Visionary” listings in the Magic Quadrant for Corporate Performance Management (CPM) Suites2 and called them “a Challenger” in the Magic Quadrant for Sales Performance Management.

But today, The Wall Street Journal reported the new CFO, James Budge announced that Frederic Laluyaux was leaving. Budge said, “The board and Fred believe it’s the right time to bring in a new set of talent to take us to a much higher level and become a much bigger company.” [businesswire]

Anaplan’s massive success in expansion would normally have been welcomed by a company board, but perhaps no longer. WSJ says there has been a shift in Silicon Valley, since the stock market has become more volatile and an economic slump may be on the horizon. Venture investors appear to be pulling back on funding and venture-funded companies are rethinking their business models.

It is unknown whether Mr. Laluyaux decided he was not the one to take the company into its next phase, or if there was a difference of opinion and he was pushed. The fact that he is leaving before a new CEO is found does not look good and may cause some bumps in the road, but the top-line talent now on board should be able to cope with that.